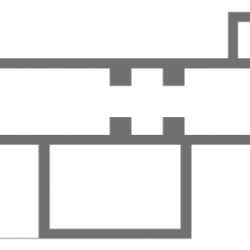 A Franciscan friary was founded in the viking city of Waterford in 1240 by Sir Hugh Purcell, whose grandfather and namesake was a lieutenant of the Anglo-Norman knight, Strongbow, also known as Richard de Clare (d.1176), 2nd earl of Pembroke.

Though not a major Anglo-Norman magnate, Purcell is mentioned in official records as being ‘of the king’s household’, and received a prominent burial – on either the right or the left side of the high altar. Given Waterford’s status as a royal city, Purcell possibly organised the foundation of the friary on behalf of the king of England, Henry III (d.1272).  The likelihood of a royal connection to Waterford friary is highlighted by the location of the lands granted to the Franciscans, which were prominently situated in the very heart of Waterford’s Hiberno-Norse triangle, just below Reginald’s tower.

Indeed Reginald’s Tower itself might have been part of a royal castle built on ‘Dundory’, the original Viking fort at the apex of the triangular settlement, and a place of strategic and defensive importance. Today only the friary church remains, with the recently opened ‘The King of the Vikings’ VR exhibition constructed with in the chapel of the church.

The King of the Vikings

The sixteenth century writings of Donatus Mooney, Luke Wadding and the Annals of the Four Masters refer to Sir Hugh Purcell as the founder of Waterford Franciscan friary.

King Henry III was a great benefactor of the mendicant friars, having contributed towards the foundation of several friaries in England. In Ireland, there is no evidence for any direct royal involvement in mendicant foundations, but Henry was generous to the friars, setting up an annual royal grant for several Franciscan and Dominican friaries – including those located in his royal cities, such as Waterford. While there is no written evidence for the involvement of Henry III in the friary’s foundation, it would not be surprising if it was the case.  The friary’s royal connection continued into the fourteenth century, and in 1395 it was the scene of four Irish chieftains’ surrender to Richard II: the O’Connor Don, de Burgo, O’Brien and O’Kennedy.

Luke Wadding, a famous seventeenth-century Franciscan historian and native of Waterford, whose statue now stands in front of the church, follows a fourteenth-century Franciscan chronicler Bartholomew of Pisa in reporting that miracles took place at the tomb of Fr. Nicholas and Fr. John of Waterford, probably in the thirteenth century. Luke Wadding is credited with inserting the feast of St Patrick into the church’s universal liturgical calendar.

The story of Waterford friary continued after the Dissolution of the monasteries by Henry VIII. Prior John Lynch surrendered the friary in 1540, and in September 1541 it was granted to Master Patrick Walsh, who established the Holy Ghost Hospital in the friary church, maintaining its purpose as a pious institution. Writing in 1616, Donatus Mooney recorded that the citizens of Waterford ‘established an asylum for the poor, in which sixty old and decrepit people, unable to earn a living, have beds.’ The hospital was in use until the nineteenth century. Part of the friary precinct, the ‘great garden’, was granted to David Bailiff in 1542. He was probably responsible for the opening of Bailey’s New Street, between the church and Reginald’s tower. The church continued to be used for burials, and its choir was converted for Protestant worship and used by French Huguenots in the late seventeenth-century, and to this day it is known as ‘the French Church’.

The remains of the Franciscan friary belong to Waterford’s rich medieval heritage. Together with Reginald’s tower that stands on the site of a Viking structure, the remains of the Dominican priory known as the Blackfriars, and the two medieval chambers located just a few meters away from the Franciscan church, namely the thirteenth-century choristers’ hall and the fifteenth-century mayor’s wine vault, the friary is now incorporated within Waterford Treasures museum.

The Franciscan church survives almost in its entirety, although most of the nave’s south aisle is gone. The medieval church was furnished with a now-lost large scale crucifix that separated the laity from the chancel as well as a number of altars dedicated to the three Magi, the Virgin Mary, St Clare, and St Apollonia, each altar would have had an image of the respective saints. The friary also had the statue of St Christopher, a patron saint of travellers and merchants.

The use of the church as a hospital until the nineteenth century greatly impacted on its medieval fabric, but conservation work has restored the interior of the church close to what it might have been like in the late Middle Ages. Visitors can admire the thirteenth-century triple lancets in the church east gable and the fifteenth-century tower, while late medieval and early modern cross slabs are displayed on the church walls. The corbels in the chancel bear images of an owl, a duck and what appears to be a rabbit in pointed shoes.

The Lady Chapel, probably a late thirteenth-century addition, is not accessible to visitors, but can be admired from the outside the church, on Bailey New Street. The chapel’s east wall, with its beautiful group of four trefoil-headed lancets surmounted by a circular light, sometime serves as the backdrop for outdoor concerts.   The interior of the Lady Chapel has recently been converted into a virtual reality Viking experience, known as ‘The King of the Vikings’.  Based in a hand built replica Viking house, the exhibition is curated by the Waterford Treasures museums.

The Waterford Treasures museum is now home to one of the largest surviving collection of medieval wooden sculpture in Ireland.  These eight figures range in date from the thirteenth to seventeenth centuries and depict: the Enthroned Madonna; an angel or girl-saint whose identifying emblems are missing; St. Catherine; The Saviour; St. John Baptist; St. John’s Head; St. Stephen; either St. Bonaventure or St. Patrick (six are of oak, one of alabaster, and the St. John’s Head is of sandstone). 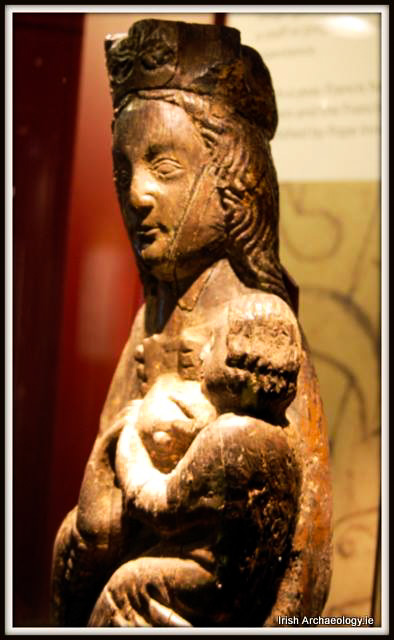 Though not all originally connected to the Franciscan friary, they  all stood in the Holy Ghost Hospital, built over the nave of the friary in 1545, later moving with the hospital to its new location on the Cork road in 1882. More recently, the statues were presented to the Waterford Museum of Treasures as a gift from the board of Holy Ghost Hospital.  They are currently displayed as part of the exhibition ‘The Art of Devotion – Art and Religious Practice in Waterford and Ireland, 1170-1690’ in Waterford Medieval Museum.

1245: King Henry III (d.1272) established an annual royal grant for the benefit of several Franciscan friaries, including Waterford.  However, in the first two years the sum is diverted, on the advice of the Provincial Minister, for the ‘enlargement and improvement’ of the buildings of the Waterford friary.

1317: The first of three Provincial Chapters take place in Waterford friary; the following two occur in 1469 and in 1615.

1521: The Observant reform is introduced in the friary.

1540: John Lynch, prior of the community, surrenders the friary; a church, steeple, a cemetery, hall, six chambers, a kitchen, two stables, a bake-house, four cellars and other buildings are seized.

1541: Another inquisition finds that the church is ‘necessary for the defence and convenience of the city.

1542: The friary is granted to master Patrick Walshe, who establishes the Holy Ghost Hospital in the church.

1612: That year the friars are said to have returned to the city.

1693: The Corporation of Waterford encourages French Huguenots to settle in the city and establish a linen industry. Protestant bishop Nathaniel Foy (d.1707) had choir of the friary converted for their religious use. The Holy Ghost Hospital and the Huguenot’s house of worship coexisted peacefully for over a century.

1766: The Franciscan community of Waterford consisted of two friars, who resided in nearby Johnstown.

1815: The Holy Ghost Hospital is transferred to a new location on the Cork Road. It is still in operation today and is one of the oldest charitable institutions in Ireland.

1830: A new Franciscan friary was founded at Lady Lane in Waterford City, with the friary built in 1833 and the church completed in 1834.

1928: The current friary was reconstructed.

2017: A Viking exhibition, ‘the King of the Vikings’ opened, located within the Lady Chapel of Waterford Franciscan friary.