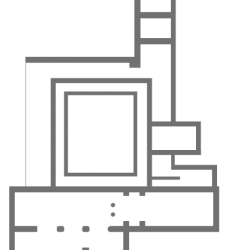 Sligo Dominican priory was founded in 1252 by Maurice Fitz Gerald (d. 1257), 2nd Lord Offaly on the south bank of the River Garavogue in Sligo Town. In the Middle Ages, the priory and the castle built by Maurice Fitz Gerald to the north would have book-ended the newly founded settlement.  However, now it stands centrally in the modern town. The remains are quite extensive, including the nave, tower and choir, parts of the south transept, the fifteenth-century cloister, the east range, and parts of the north range, which includes the readers’ desk of the refectory on the upper floor of that range. Conservation work by the Office of Public Works in the course of the twentieth century included the reconstruction of the triple-arch of the rood screen at the east end of the nave, and the fitting of modern stairways to access the east and north ranges’ upper floors.

Maurice Fitz Gerald (d. 1257), 2nd Lord Offaly, was the son of Gerald Fitz Maurice (d.1204), 1st Lord Offaly – a title acquired through his wife, Eve de Bermingham (d. 1223-6), Lady Offaly. Regarded as the founder of the famous Geraldine house of Kildare, Gerald had travelled to Ireland as part of the Norman invasion with his father, Maurice Fitz Gerald (d.1176), lord of Lanstephen. Maurice (the younger) was appointed Justiciar of Ireland in September 1232 and held the post until 1245. Having taken part of the conquest of Connacht in 1235, in 1245 he built a castle and established the settlement in what would become the town of Sligo.

As well as establishing the Dominican priory there in 1252, he was also a patron of the Franciscan friars of Youghal, Co. Cork. His generous patronage of the mendicant orders earned him the nickname of ‘an Brathair’,meaning ‘the Friar’. He married Juliana de Cogan, daughter of Sir William de Cogan, and they had four sons, including Maurice Fitz Gerald, 3rd Lord Offaly (d.1286). In 1257, Maurice and his men fought against the forces led by Gofraidh (Godfrey) Ó Domhnaill, King of Tír Chonaill at the Battle of Creadran Cille, in the north of County Sligo. Maurice and Gofraidh fought each other in single combat and were both seriously wounded, Maurice grievously. He died of his injuries on 20 May at the Franciscan friary he had helped established in Youghal, Co. Cork, wearing the Franciscan habit at the age of sixty-three.

Like most mendicant foundations, the Sligo friars benefitted from both Anglo-Norman and Gaelic Irish patronage. After the priory burned in 1416, the Annals of the Four Masters tell us that it was rebuilt by Friar Brian, son of Dermot MacDonough of the MacDonough (or MacDonagh) Lords of Tirrerill, Co. Sligo. In 1484, Brian MacDonough, Lord of Tirreril was buried in the priory. A number of funerary and memorial monuments in the priory church also testify to the ongoing patronage of local Irish families. The canopied wall tomb in the nave is the O’Crean tomb of 1506 – the O’Creans were a wealthy merchant family from Donegal who came to Sligo in the late fifteenth century. In the south wall of the choir is also a large mural monument erected in 1624 by Lady Eleanor Butler (d.1635) for her husband Sir Donogh O’Connor (d.1609). Eleanor’s first husband was Gerald Fitz Gerald (d.1583), 15th earl of Desmond, whose ancestors were great benefactors of the mendicants throughout the Middle Ages.

The priory in Sligo Town is one of the most extent remains of medieval Dominican priories in Ireland, and contains many fascinating features. Some are unique in Ireland, like the reconstructed triple-arched stone rood screen at the east end of the nave, and the fifteenth-century high altar under the east window, also re-erected from its original stones, and containing nine carved panels. In addition to the funeral monuments previously mentioned, remarkable features include the fifteenth-century tower and cloister, three sides of which survive and include decorative carvings and a variety of style of supporting columns. Despite the west and north range being mostly gone, the east range and parts of the upper floor of the north range survive. Particularly noteworthy there are the large, vaulted chapter room in the east range and the reader’s desk in the upper floor of the north range, where the refectory was located.

1253: The Annals of Loch Cé recorded that a monastery was erected and a cemetery consecrated for the friars at Sligo

1360: The town of Sligo was burned by MacWilliam Boucher, including the Dominican priory

1414: In spring of that year, the priory burned down following a fire started by a candle (Annals of Ulster)

1415: Pope John XXIII granted an indulgence on several feast days to anyone who would give alms towards the restoration of the priory. In the same document it is mentioned that the community consisted of 20 friars

1416: The priory is said to have been rebuilt by Father Brian, son of Dermot Mac Donough (Annals of the Four Masters)

1418: Tigernan, son of Ualgarc Ua Ruairc, king of Breifni, died and was buried in the priory (Annals of Ulster)

1454: Brian Mac Donough, Chief of Tirerrill, died on the Friday before the Calends of January, (Calends being the first day of each month) and was interred in the priory at Sligo

1484: Brian Mac Donough, king of Tirerrill, Co. Sligo, was buried in the priory

1568: A letter from Queen Elizabeth to O’Conor Sligo agrees to his request that the priory be preserved, as it contains the burials of his ancestors and the friars there have become secular priests

1585: An inquisition found that the priory was comprised of a church, belfry and cemetery, two other stone buildings, a quarter of land called the Fryer quarter, a fishing weir, and was inhabited by priests who were formerly friars of the priory

1595: George Bingham, brother of the president of Connacht, took up quarters in the priory when he was leading the siege of Sligo castle, and had much of its woodwork used to make ‘engines’ for the siege (Annals of the four Masters)

17th century: The priory was granted to William Taaffe

1622: There were ten fathers in Sligo, and in 1627 a Provincial Chapter was held there

1641: In the course of the war of 1641, Colonel Sir Frederick Hamilton (d.1647) marched on Sligo, burned the priory and killed the friars

1731: In the Lords’ Committee Returns of that year, it is said that there was one priory and that the friars were ‘dispersed about the country’

1865: The present Dominican convent was completed and occupied. It is situated on Dominick Street, just a short walk from the remains of the medieval priory

1913: The owner of the medieval priory, Mr Wilfred Ashley, MP, vested the monument to the Board of Public Works