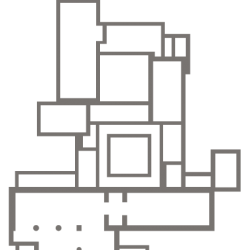 The Franciscan friary of Ross Errilly lies on the banks of the Black River, a natural border which divides the modern counties of Galway and Mayo before it enters Lough Corrib.  One of the most impressive surviving Franciscan friaries in Ireland, Ross Errilly is located 2km North West of the Galway village of Headford.  It was founded at some point between the mid-fourteenth and late fifteenth centuries. Historians have argued over dates of the friary’s foundation ranging from 1348 to 1498, with the early seventeenth century Franciscan historian Donatus Mooney noting that the date of the friary’s foundation was unknown.  The earliest contemporary reference to the friary was when John Blake, a Galway citizen, bequeathed forty pence to the friary of Ross (Ross Errilly) in 1469. It does not appear on lists of Franciscan friaries in Ireland in 1331 or in 1385.  Based on this and additional evidence, the Franciscan historian Canice Mooney has suggested that the foundation occurred c. 1460, which appears most probable, especially when surviving architectural evidence is taken into consideration.   The Franciscan community of Ross Errilly adopted the Observant reform by the end of the fifteenth century and became one of the leading Observant foundations in Ireland. Besides its many possible foundation dates – 1348, 1351, 1431, 1460 and 1498 – Ross Errilly can also pretend to the title of friary with the greatest variety of spelling of its name, with no less than forty-four different spellings found in sources between the fifteenth and eighteenth centuries!

Mirroring the ambiguity over its date of foundation, the question of the identity of the original founder of Ross Errilly friary is also unclear.  Both the Clanricarde Burkes and the Gannard families were prominent benefactors of the friary over the years, with each also suggested as possible principal founders of the friary. The Gannard (also known as Gaynard) family were the largest landholders in the manor of Athmekin (now modern Headford), and might well have provided the Franciscan community with lands to build their friary.  The Gannards feature prominently in records of land ownership in the late thirteenth and early fourteenth centuries, but the only family members who are mentioned by name are Adam, a knight in 1287 and his son, William, a knight by 1305.  The family do not feature prominently in the historical record after this point, with the next reference mistakenly tying them to the foundation of Ross Errilly in 1498. It would appear that the Gannards were to lose power and influence during the fourteenth century, especially during a period of intense fighting in the region between 1335 and 1355.  It was the Burkes who then replaced the Gannards as the majority landholders in the manor over the following century.  However, there is little to tie them to the foundation of Ross Errilly directly.  Ulick Burke (d.1485), lord of Clanricarde was known as Ulick ‘the Red’ (Uilleag ‘Ruadh’). He was tenuously connected to the Franciscan order through is his marriage to Slaine, daughter of Tadhg Ó Briain, king of Thomond – her uncle Conchobhar was the probable founder the Franciscan friary of Moor Abbey near Galbally, Co. Tipperary in 1471.  There is therefore little to support the argument that he was the founder of Ross Errilly friary.

While most likely not the original founders of Ross Errilly, the earls of Clanricarde certainly became important patrons and protectors of the friars in the sixteenth century, especially following the official dissolution of the friary at the general suppression of monasteries. In 1562, Queen Elizabeth granted the friary, along with other monasteries, to Richard Burkes, 2nd earl of Clanricarde.  The friars were forced to leave, but in 1580 he re-established them in the friary once again. Later his grand-son Richard, the 4th earl, again restored them to their house in 1611.

In the early seventeenth century, Donatus Mooney, minister provincial of the Irish Franciscans and noted historian of the order, noted that there were still six members of the community and two lay friars at Ross Errilly.  He also observed that the friary had been greatly damaged by English soldiers, who had also burnt all the records and books of the community. Despite this destruction, the friars were back in the friary in 1626.

Though not the original founders of Ross Errilly, the Burkes of Clanricarde were certainly its most important.  Indeed, it is thanks the Clanricarde’s support and protection, that the friary survived until the eighteenth-century. Its many rooms were only finally abandoned at the beginning of the nineteenth century.

The friary at Ross Errilly is one of the most impressive and complete Franciscan foundations in Ireland. It’s two large chapels or ‘transepts’ more than double the space of the nave, while the two-storey domestic buildings are set around both a cloister and an outer court. The domestic buildings are particularly well-preserved due to the continued use of the friary into the eighteenth century. This gives visitors a great sense of the unfolding of the friars’ everyday life around the cloister and outer court: in the west range of the outer court is the kitchen, where there is a large fireplace with an oven, beside a deep circular stone pit, a fish tank; the refectory is located in the eastern range of the outer court, with the lector’s desk at the northwest corner of the room; various staircases led to the friars’ dormitories in the upper floors. In the church, the multiple chapels and secondary altars in the nave and its ‘double transept’, the gallery used as a preaching platform, the tomb niches, are all features associated with the devotions and religious practice of the laity, suggesting that, despite its seemingly remote foundation in a very rural landscape, the friary and the friars served the pastoral and spiritual needs of a local population important enough to fund the construction and maintenance of these structures.

(Video courtesy of Potcheen on the Road)

1460: This is the most likely date that Ross Errilly friary was founded in. The Gannard and Clanricarde families have been linked with the foundation, but it’s more likely to have been the Gannards initially, with the Clanricarde Burkes acting as protectors of the friary and its community over the coming centuries

1472-1474: Lady Nuala O’Donnell, mother of Red Hugh O’Donnell (d.1505) is said to have gone in person to a Chapter taking place in the friary of Ross, to appeal for the establishment of a Franciscan friary in Donegal

1469: The earliest contemporary reference to Ross Errilly friary occurred when John Blake, a Galway citizen, bequeathed forty pence to the friary of Ross

1496: The will of a Galway merchant, John Lynch, made a bequest to the friary of Ross

1540: The friary was official dissolved during the general suppression of monasteries

1542: Queen Elizabeth I granted the friary to Richard Sassanach (meaning ‘Ebglishman’) Burke, 2nd earl of Clanricarde, (d.1582) who allowed the friars to remain and offered them his protection

1572: Fr Ferrall MacEgan had a causeway leading to the friary made

1580: The Earl of Clanricarde re-established the friars in the friary, after they had been forced to leave

1596: During the Nine Years’ War, the friary was occupied by English soldiers, who expelled the friars once again.  They did not leave the area, however and resided nearby until they were able to return to the friary

1601: Nehemiah Donnellan, Protestant Archbishop of Tuam was ordered to arrest the friars who had reoccupied the friary at Ross Errilly.  However, he sent a forewarning to the friars so they could escape and avoid detention

1611: The friars were able to return to the Ross Errily under the protection of Richard, 4th earl of Clanricarde

1616: During his visitation as the Provincial of the Franciscan Order in Ireland, Donatus Mooney visited Ross Errilly friary. He found that eight friars were residing in the friary but also observed that much damage had been carried out by English soldiers during recent wars, who were reported to have burned all the records and books of the friary

1633:  The Maria Montij Jennings chalice was made for the friars of Ross Errilly. The chalice ended up at auction in London in 1872 and is in the possession of the local parish in Colchester, Essex, England.  The inscription reads: Maria montij Jonasn me firei fecit Pro Conventu fratrum minorum de Rosriala Pro cuius anima oretur Ano 1633

1642: The Massacre at Shrule:  In 1641, civil war erupted in October, later known as the Irish Confederacy Wars (1641-53).  Fearing for their safety, English Protestant settlers in Connacht sought protection in local castles held by allies.  In January 1641 when thirty-eight Protestant English settlers had been killed en route to Sligo jail.  In February 1642, the Protestant bishop of Killala, John Maxwell, his family and servants had sought protection in Sir Henry Bingham’s castle at Castlebar, Co. Mayo.  Bingham soon surrendered his castle to Myles Burke, 2nd Viscount Mayo, with Maxwell and his party to be transferred to Galway city in safety.  En route, they were to change escort in Shrule, near Ross Errilly friary.   However, once the forces of Viscount Mayo had left Shrule, the second escort, led by Edmond Burke attacked the hundred Protestant English refugees, massacring over half of them.  The Franciscans of Ross Errilly sheltered survivors of the infamous massacre at Shrule

1732: The report of Stratford Eyre into the state of popery in Galway revealed that the friars of Ross Errilly had moved to nearby Kilroe, Co. Mayo.  They resided on the estate of Martin Blake, a recently converted Protestant

1832:  The friary of Ross Errilly was finally suppressed by the provincial of the order.  The last members of the community there were Frs. Michael Jennings, Matthew Kenny and Hubert MacNally