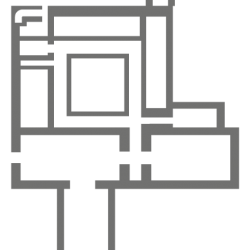 Muckross friary is located in the very picturesque landscapes of Killarney National Park, just a few kilometres south of the town, on the shores of Lough Leane. It was established under the patronage of Donal ‘an Diamh’ MacCarthy (b. 1373) around 1440, although it might be re-foundation. Indeed the story goes that Donal’s great grandfather Cormac MacCarthy Mor wanted to found an abbey, and it appeared to him in a vision that he should build it nowhere else than Carraig na Chiuil, the Rock of Music. He sent men to search for the place, and they were about to return to Cormac having failed to locate the site, when passing by Oirbhealach (Irrelagh) they heard the most beautiful music coming from a rock, and Cormac founded the abbey there. The first reference to Muckross occurs in a bull of 1468 which indicated that the community had been in existence there for about 20 years under the observance of their guardian, Richard Chilvart.

When Donal ‘an Daimh’ (the poet) MacCarthy (b. 1373) founded or re-founded Murckross friary, Franciscan patronage had long run in his family. His Great grandfather, Cormac MacCarthy Mór, Prince of Desmond, might have originally founded Muckross friary in 1340; he had eight sons and a daughter, including Dermod Mór, created Lord of Muskerry in 1353 and thus an ancestor of Cormac MacCarthy, lord of Muskerry, who founded the Franciscan friary of Kilcrea in 1465. Donal’s father, Teige na Manistreach (‘of the Monastery’), was himself a great benefactor of the Franciscan community of Cork city, and was buried in the friary in 1413.

Donal was one of the Irish lords who took advantage of the weakness of the English royal power in fifteenth-century Ireland, and took part in a rebellion, only consenting to give up arms in exchange for the payment of an annual tribute – the foundation or re-foundation of Muckross friary can be interpreted in the context of this power struggle. He died in 1468.

Muckross friary became the burial place of choice for many Gaelic families besides the MacCarthys, including the O’Sullivans, the McGillacuddies and the O’Donoghues. The beauty and calm surroundings of the friary has inspired many artists over the years, such as a coloured view of the ruins found amongst the royal manuscripts in the British Museum, probably dating to the last decades of the eighteenth century, and works by painter Jonathan Fisher (1789 and 1796) and artist Isaac Weld (1807).

Muckross friary is an unmissable stop in any trip to Killarney and Killarney National Park. Its setting in the gorgeous landscapes of the park is a picturesque sight in itself. Amongst the many fifteenth-century friaries the remains of which survive extensively across Ireland, Muckross holds a special place, as it is the only one where the upper floors of two of the three domestic ranges are accessible to visitors, offering a more complete experience of the buildings where the friars worked, ate and slept 500 years ago.

In the embrasures of eight of the windows of the dormitory are fragments of wall paintings, demonstrating the role of art in the context of the friars’ private devotions. The beautiful integrated cloister surrounds a courtyard where stands a magnificent yew tree, which is said to be at least as old as the friary itself; the cloister might even have been planned and built around the tree. In the horizontal sill of the north cloister arcade is a small incised dial with an arrow marking north.

The church, while displaying a simplicity in its architecture typical of the mendicant orders, presents many interesting features too, such as the stocky crossing tower and its tall, slim arches.

1340: That year, according to the Annals of the Four Masters, the friary is founded by Mac Carthy More, ‘Prince of Desmond’

1440-48: Donal, son of Thady MacCarthy, founded or re-founded the friary

1468: A papal indulgence is granted for the completion of the buildings, twenty years after construction has begun

16th century: The friars remained in at Muckross until it was occupied by Protestant forces, who caused damages to the buildings and killed a number of friars

1586: Fr Donagh O’Murheely and a companion were stoned and tortured to death in the friary

1587: The friary is said to have leased out that year

1591: A valuation of the friary finds that its possessions amount to four quarters of land, two orchards and a garden

1595: The friary is granted to Robert Collan

1602: The friary is rebuilt but becomes ruinous again shortly thereafter

1609: The Observant reform is introduced in the friary

1612: The friars occupy the old buildings once again

1617: The buildings are restored

1626: According to an inscription on a tablet in the north wall of the chancel, the church was restored that year

1638: A guardian is appointed to the community, who sought refuge on Friars’ Island (at Faghbawn, near Killarney)

1652: The friars are driven out by Cromwellian forces, who plunder the friary

1714:  It was reported to the crown administration in Dublin that community of Muckross friary were scattered, with the guardian, now an old man, residing 5 miles outside in Killarney

1788:  Revd David Beaufort was informed by the caretaker of Muckross friary that on the feast of St Mary of the Angels (2nd August), mass was celebrated on a temporary altar, with 4 or 5 friars in attendance and it always drew a very large crowd from the surrounding area

1929: The first high mass since penal times was said in the ruins of Muckross friary.  2,800 Franciscan tertiaries from Cork, Tralee and Killarney marched in procession from Killarney to the friary

1940: Despite the difficulties presented by the ongoing war, the 600th anniversary of the founding of Muckross friary was celebrated