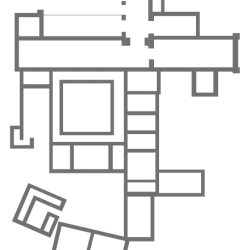 Kells Augustinian priory is situated on the bank of the King’s river, 0.5km to the east of the present village of Kells and 12km south of Kilkenny city. The priory was founded c.1193 by Geoffrey Fitzrobert (d. 1211), who brought four canons over from Bodim Priory in Cornwall to establish a community outside his borough of Kells. The priory was dedicated to the Virgin Mary and the canons were granted a site near a pre-Norman ecclesiastical site dedicated to St Kieran. They also received half of the parish of Kells in land and held several granges, or farms, within and without the parish. The extensive priory remains are a fortified enclosure with six towers and a gateway, the priory church, the cloister and its domestic buildings and the prior’s residence. Excavations uncovered a wealth of material including decorated floor tiles, fragments of wall paintings and of painted window glass.

Geoffrey Fitzrobert de Monte Marisco (d. 1211) was an Anglo-Norman knight in the service of William Marshall, earl of Pembroke and lord of Leinster (c.1146-1219). Geoffrey married Basilia, a sister of Richard de Clare, popularly known as Strongbow. Hence he was William Marshall’s father-in-law, from whom he inherited the lordship of Leinster. When Basilia died, Geoffrey married Eva de Bemingham (d. c.1223/6), widow of Gerald Fitzmaurice, first lord Offaly. These connections tied him closely to William’s household, and he became seneschal of Leinster sometime between 1204 and 1208. He was most likely established lord of the cantred of Kells after William came into possession of Leinster in 1192, and he was also granted lands in Dysart, Co. Kilkenny and the cantred of Grean in Co. Limerick. Geoffrey decided to build a motte-and-bailey castle in his cantred of Kells, on the bank of the King’s River, a site that had already been important in the pre-Norman kingdom of Osraige. He established the Augustinian community nearby, and a secular settlement, known as a borough, between the castle and the priory. Kells was granted a borough charter in 1211 x 1216. It was attacked on numerous occasions in the thirteenth and fourteenth centuries, most notably by William de Bermingham in 1252, by Edward Bruce in 1317 and by the de Berminghams and Fiztgeralds in 1327. Although possessing considerable lands, the priory declined during the fifteenth century and was dissolved in March 1540.

Picturesquely located beside the King’s river, in the rolling Kilkenny countryside, Kells Priory is one of the most impressive Augustinian priories Ireland. It is a unique example of a fortified monastery, combining elements of both religious architecture and late medieval military architecture. The remains are comprised of the church and domestic ranges, built between the thirteenth and the fifteenth century, and of two fifteen-century defensive enclosures: the monastic precinct, and an adjoining enclosure known as the Prior’s vill. The Prior’s vill is the only example of an upstanding late medieval incastellated enclosure at an Irish monastery, and consists of high walls and tower houses.

(Video courtesy of Derek Delaney Photography – check him out on Instagram!)

1193: Kells was founded by Geoffrey Fitzrobert who brought four Augustinian canons from Bodmin, in Cornwall

1252: Kells was burned by Sir William the Bermingham, a relation by marriage of Geoffrey Fitzrobert

1314: Gilbert the Clare, eighth earl of Gloucester and seventh earl of Hertford (1291–1314), magnate, died and consequently the liberties of Kilkenny was divided among his three sisters and brothers-in-law. The heirs were: Hugh Despenser, the younger (d. 1326), Roger Damory (d. 1322) and Hugh Audeley (d. 1347). Kells fell into de Audeley’s hands

1317:  Edward Bruce reached Kells in March of that year

1327: Kells and the surrounding area was sacked and burned by the de Birminghams and Fitzgeralds during  a baronial war

mid-14th century: There was a loosening of the relationship between Kells and Bodmin. Up to this point, priors had always been appointed from the mother-house (Bodmin) and thereafter became more localized

1421:  The Augustinian canons of Kells complained that the income from their churches had reduced due to the constant wars in the area which threatened their economic survival

1446: The fragile alliance between the houses of Ormond and Desmond was dissolved, as a result, Kells was being devastated at the hand of Desmond and his Irish allies

1540: The priory was dissolved.  Its last prior, Nicholas Tobin, and two canons were granted pensions. Tobin retained a rectory and continued as curate of Kells. Under secular hands, the priory was turned into a farm and the Prior’s Tower with the cloister was used as farmhouse. Part of the church was used as a parish church.

1541: The church and its properties were surrendered to James Butler, ninth earl of Ormond by Henry VIII

1629: Patrick Comerford (c.1584–1652), himself an Augustinian, was appointed prior of Kells by Pope Paul V and also became bishop of Waterford and Lismore, keeping the priory of Kells

1893: Kells Priory became a National Monument in the guardianship of the Commissioners of Public Works. Since then, works of conservation have been undertaken at various intervals

1970s: Extensive excavations carried out under the direction of Tom Fanning, Office of Public Works