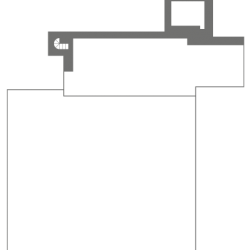 Ferns priory, also known as St. Mary’s Abbey, has been functioning as an ecclesiastical site associated with St Edan (Aidan or Máedóc) since the 7th century. At the synod of Ráith Bressail in 1111, Ferns became one of five episcopal sees in Leinster.  The diocese was almost equivalent to the kingdom of Uí Chennselaig, a dynasty in south Leinster that provided many rulers of Leinster in the second half of the first millennium AD.  Ferns was an important centre of the increasingly powerful Uí Chennselaig dynasty in the tenth and eleventh centuries, becoming the caput (or principal seat) of the dynasty under Diarmait Mac Murchada (Dermot MacMurrough), (d.1171), king of Leinster. Through his patronage, an Augustinian abbey dedicated to St Mary was founded circa 1160-2. It was founded either within the earlier ecclesiastical settlement or very close to it. According to Diarmait’s granting charter, the Augustinian community at Ferns was under the authority of the episcopal see.

Diarmait Mac Murchada (d.1171), king of Leinster, played an important role as patron supported by his brother-in-law, Laurence O’Toole (d.1180), archbishop of Dublin. In addition to Ferns, he was also the patron of the Cistercian Abbey of Baltinglass, the Augustinian abbey at Glendalough, an Augustinian nunnery in Dublin, and the simple damliac (a simple stone church with vertical, mortared walls) at Killeshin.

Mac Murchada was ambitious, aggressively pursuing the whole kingship of Ireland and stirred up conflict with many other kings. In his drive to secure the kingship of Leinster, MacMurrough had attacked Ossory, Meath and Waterford.  He sought control of Kildare and deposed an Uí Fáilgi abbess (the Uí Fáilgi inhabited modern Offaly and west Kildare). He also abducted Derbforgaill, wife of Tighearnán Ó Ruairc, king of Breifne, and daughter of Murchard Ó Maelseachlainn, king of Meath. During the subsequent conflict, Mac Murchada was stripped of his title by Ó Ruairc, Ó Maelseachlainn, and the Norse of Dublin, he was driven into exile and his kingdom was divided.  He was forced to look to aid from outside Ireland, to the Anglo-Norman king Henry II of England, obtaining support from Henry’s vassel Richard de Clare, (d.1176), more commonly known as ‘Strongbow’. Returning to Ireland with Anglo-Norman allies in 1167, he recaptured his former territories, first re-establishing himself at his old capital of Ferns before expanding his powerbase in 1169 with the arrival of a strong Norman force from Wales.  Strongbow succeeded MacMurrough to the lordship of Leinster, also regarding Ferns as one of his strongholds.  Having invited the Anglo-Normans into Ireland, MacMurrough earned himself the unfortunate nickname, Diarmait na nGall or Dermot of the Foreigners.

It is believed that Diarmait Mac Murchada was buried on the grounds of the abbey in 1171 and that a shaft of a high cross marks its place.

The town of Ferns is interesting and complex, comprising of ruinous medieval ecclesiastical and secular structures, and modern places of worship. Part of St Mary’s Abbey and its round tower survives, located close to the structure of what is believed to be a thirteenth century cathedral. The cathedral was founded by John St John, (d. a.1253), bishop of Ferns and treasurer of Ireland. Aligned with the cathedral’s ruins is found a refurbished late medieval cathedral that is now is a Church of Ireland temple of worship. The settlement has also four early high crosses heads, and a decorated shaft of a high cross, which is believed to mark Diarmait’s burial place.

Nearby stands the remains of the Marshall Castle of Ferns.  Built in the 1220s by the Marshalls in direct challenge to the authority of the then declining MacMurroughs, the castle is an unusual example of castle in Ireland – a large, solid rectangular block of a building with round corner towers, more akin to the crusader castles of the Levant than contemporary Irish castles.  This would have been surrounded by a large (5m) moate that had been cut into the shale bedrock.  Though only a portion of the building remains, the castle contains one of the most remarkable medieval chapels on the first floor that features decorative capitals from which moulded ribs spring, a piscine and a trefoil-headed sedilia.  It was designed for the private celebration of mass by the inhabitants of the castle and is accessible as part of tour of the castle.

1111: At the synod of Ráith Bressail, Ferns was designated as an episcopal see. The diocese was almost equivalent to the kingdom of Uí Chennselaig

1160: Diarmait Mac Murchada, king of Leinster granted to the Augustinians an abbey at Ferns, the capital of his kingdom

1162: Diarmait Mac Murchada presided over the synod of Clane, and Joseph Ó hAodha, the bishop of Ferns, was Diarmait’s kinsman

1166: Due to political conflict with the kings of Breifne, Meath and the Norse of Dublin, Diarmait was stripped of his title of king and fled to Bristol. He returned later with Norman knights to support him to reclaim his kingdom, led by Richard de Clare, aka ‘Strongbow’

1171: Diarmait Mac Murchada died Ferns. It is said a shaft of a high cross at Ferns, which is on the grounds of the medieval and modern Church of Ireland Cathedrals marks his grave

1184: Ailbe O’Mulloy (Aulbin Ua Máel Muaid) preached at a synod in Dublin against the clergy coming from England and Wales. He was a Cistercian abbot from Baltinglass who became the bishop of the diocese of Ferns in c.1186. He was the last medieval Irish bishop at Ferns, being substituted by an Anglo-Norman bishop

1276/7: Edward I ordered troops for service in Flanders, leaving the colony in Ireland exposed. Gaelic leaders attacked the lands and property of the Anglo-Irish settlers, with Wexford badly affected – 49 burgages (a term for a property/ lands in a burrough, usually with a dwelling) in Ferns and 148 in Wexford were laid waste

1317: The abbey was plundered and burnt by Irish forces during the Bruce wars

Mid-15th century: The position of abbot was hotly disputed during this time

1538: The abbey was suppressed. William Doyle was its last abbot. It was described as a church and belfry, dormitory, chapter-house, hall and other buildings with c. 600 acres and other interests

1583: It was granted to Thomas Masterson

In 2009, historic sites at Ferns suffered a wave of vandalism, which included the breaking of stained glass at St. Edan’s and the smashing of floodlights at St. Mary’s abbey