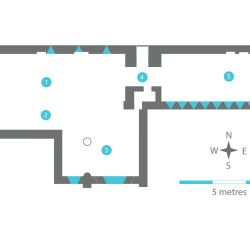 The medieval town of Cashel in Co. Tipperary is best known for the impressive and imposing Rock of Cashel, an early medieval provincial centre of kingship and an episcopal seat established in the twelfth century. The Rock is a miscellany of medieval architecture and art, featuring a twelfth-century round tower, Cormac’s Chapel, thirteenth-century Gothic cathedral, fifteenth-century Castle and the restored Hall of the Vicars Choral. At the foot of the Rock, and unsurprisingly overshadowed by it, lies the Dominican priory of Cashel, founded in 1243 by David Mac Kelly Ó Gillapatrick, archbishop of Cashel.

The town of Cashel developed as an episcopal seat in the thirteenth century and the Dominicans were part of that urban development, with the Franciscans also settling in Cashel, around 1265. Cashel priory was the third foundation of the Dominican order in a borough in Ireland after Mullingar, Co. Westmeath (1237) and Athenry, Co. Galway (1241).  The priory church survives in its entirety, including the south transept and side-aisle and is located to the north of the town, below the Rock.

The founder of the Dominican priory was the archbishop of Cashel, David MacKelly Ó Gillapatrick (Mac Ceallaig Mac Giolla Phádraig) (d. 1253), likely a member of the MacGillapatrick dynasty of Ossory. He is thought to have joined the Dominican order at their priory of Cork, was later dean of the chapter of Cashel, and was made bishop of Cloyne in 1239. That he became bishop in Cloyne so soon after the coming of the friars to Ireland testifies to their quick success in the country. As bishop of Cashel, he consolidated his position by supporting the candidature of another Dominican friar, his ally Ailim O’Sullivan (d. 1253), to the bishopric of Cloyne in 1240. He also became involved in the ecclesiastical politics surrounding the appointment of the archbishop of Armagh.

Besides the foundation of the Dominican priory in 1243, MacKelly devoted himself to the administration of his province, consecrating new bishops and ensuring that the bishops subjected to the see of Cashel upheld his high standards of theological knowledge. In 1246, for example, he ordered the bishop of Limerick to resign his diocese, as he was accused of simony, illegitimacy and ignorance, a decision eventually enforced by the pope. In April 1251, Henry III (d. 1272) ordered him and his fellow Dominican friars to preach a crusade and allow royal officials to collect money for that purpose. He died sometimes between January and April 1253.

While MacKelly has been identified as the original founder of the priory, John Cantwell, archbishop of Cashel also played a key role as a patron of the priory. Following a fire that destroyed the priory in 1480, Cantwell undertook its reconstruction and refurbishment at his own expense. In recognition for this, a document was drawn up at a chapter in Limerick that included Cantwell on the list of founders of the order, with others contributing to the rebuilt receiving special spiritual benefits – effectively making Cantwell a founder of Cashel priory.

The Dominican priory of St. Dominic sits in the shadow of the famous Rock of Cashel, only a short walk away. The town has a rich medieval history and its further exploration adds another layer to the visitor’s experience. Notable features of the priory church include the nine lancet windows in the choir, and the fifteenth-century windows that were inserted in place of thirteenth-century lancets in the choir, transept and west wall of the nave: four and five lights with curvilinear tracery in the choir and the transept, and a four-light window with modified switch-line tracery and round-headed sub-arches in the west wall of the nave. The priory is normally locked – Keys to enter the site are available from the resident of 19 Dominic St. (The first house to the right of the priory.)

1250: King Henry III (d. 1272), wrote to the archbishops of Dublin and Cashel to encourage them to preach the crusades in Ireland. To the archbishop of Cashel, he also added that the pope’s letter be placed in the custody of the Dominicans in that town.

1256: A chapter was held in Cashel, during which time, the vicar provincial of the Dominican Order in Ireland was identified as Friar Charles (Karolus), a vicar of the English provincial.

Mid-13th century: A ‘Cashel School’ of mason was active at this time, with a single mason’s mark identified in five of the most important buildings constructed in the mid 13th century – St Canice’s in Kilkenny, Cashel Cathedral, Athassel Priory, Youghal and Cashel Dominican priories. Cashel Cathedral and Dominican priory share similar design features, suggesting the same work force was employed on both.

1394: John O’Grady, archbishop of Cashel, was buried in the priory.

1480: John Cantwell, archbishop of Cashel, was a benefactor of the priory and recognized as a co-founder when the priory was rebuilt following an accidental fire.

15th century: The great east window of Cashel priory was replaced during renovations. The typical style of early English Gothic would have been a group of lancet windows combined under a single arch. In the fifteenth century, these were replaced by large single windows with chamfered (the removal of an edge between two faces) mullions (vertical divides between panes of glass in windows) and jambs (side post or lining of a doorway), a the head or top of the window filled with reticulated tracery (a net-like form of tracery made up of ogees (a double curve in the shape of an ‘s’)).

1535: Edward Brown, prior, leased out some of the property of the priory prior to the dissolution to a Peter Kelley, who leased nine tenements (or cottages) with six gardens, and a few others, including a Walter Flemming, who leased two messauges (a dwelling house with outbuildings and land) with four gardens.

1541: At another inquisition, it was found that the buildings had been sold, and that other possessions of the priory included an orchard, three gardens and a cemetery containing two acres, as well as nine tenements or cottages with six gardens within the precinct, and two messuages with four gardens outside of it. The size of the conventual precinct (the walled site of the priory buildings and surrounding gardens) was recorded as 2 acres (Trim priory, Co. Meath was 4 acres, while Waterford priory was only ½ an acre).

The church, chancel and cloister were sold after the dissolution for £4 (Waterford church was sold for £10).

1755: The Dominican houses of Cashel and Ballindoon were considered the best preserved of all the Dominican monasteries by Thomas de Burgo in his Hibernia Dominicana.

1756: Five friars were still attached to the priory.