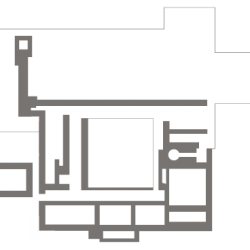 The Cistercian abbey at Bective is located close to the river Boyne in a rich medieval landscape and approximately 8km from Trim, one of the most intact medieval towns in Ireland. The abbey was dedicated to the Blessed Virgin Mary. It was the second Cistercian foundation in Ireland and daughter-church of Mellifont Abbey, Co. Louth (1140/2). At its height its properties included several granges, a watermill and a fishing-weir on the Boyne. Recent excavations have revealed evidence of large-scale cereal processing and also of the monastic kitchen garden in which herbs, vegetables, salads and fruit were grown. The extensive remains reflect periods of construction from the late twelfth and thirteenth-century church to the post-Dissolution fortified mansion.

The abbey was founded in 1147 by Murchadh O Melaghlin, king of Meath (Mide), whose territory stretched from the midlands to the east coast. He reigned for forty-seven years and he and his family were important patrons of new foundations in the midlands, including a convent of canonesses at Clonard, Co. Meath, the Nuns’ Church at Clonmacnoise, Co. Offaly and the Augustinian priory at Durrow, Co. Offaly. The Anglo-Norman lord Hugh de Lacy, lord of Meath, was killed in 1195 with an axe wielded by an Irishman when supervising the construction of a motte (a defensive fortification) at Durrow. His body was buried in Bective but his head was brought to St Thomas’s Abbey, Dublin. The two monasteries fell out over who had the right to de Lacy’s remains until the Bishop of Meath intervened in 1205 in favour of St Thomas’s. Abbots of Bective were involved in disputes with other Cistercian houses such as Mellifont, Co. Meath and Jerpoint, Co. Kilkenny.

The discovery of heraldic floor tiles at Bective bearing the arms of Gearoid Mór Fitzgerald, 8th earl of Kildare, suggests that the late fifteenth-/ early sixteenth-century renovations were completed under his patronage. Similar tiles were recovered at both Christchurch and St Patrick’s cathedrals, Dublin and Great Connell Priory, Co. Kildare, demonstrating some of the extent of the earl’s patronage of religious buildings.

Following the dissolution of the abbey it was leased to Thomas Agard, assistant to the Vice-Treasurer William Brabazon, who converted the domestic ranges of the abbey into a fortified house.

Located in lush and picturesque countryside less than an hour from Dublin, Bective Abbey is a good example of an abbey that reveals much of its history through its surviving fabric. The plain features of the church reveal the earliest, most austere phase of construction, at a time when the ethos of the order prohibited the unnecessary embellishment of buildings. The more ornate, late fifteenth-/ early sixteenth-century cloister contains a carving of an abbot. It reflects a period when, as the community of Bective contracted in size, it came to function more as a gentry house, from where its sizable estates were managed; the new tower house also built at the time an indication of the status of the abbot who dwelt within. The final phase of development is most evident in the east range, where an additional storey with dormer windows was added in the late sixteenth century, probably as servants’ quarters. These, together with the insertion of fireplaces with tall elegant chimney stacks, represent the total secularisation of the buildings following the Dissolution, when the estates passed to various individuals linked with the Dublin administration.

1227: The abbot of Bective became involved in riots in the Cistercian foundation at Jerpoint, Co. Kilkenny for which he was imprisoned

1380: King Richard II ordered that no Irishman or king’s enemy should be admitted as a monk to Bective

1488: James, abbot of Bective, was pardoned for his part in the Lambert Simnel rebellion.  Lambert Simnel, the son of an Oxford carpenter, was presented as the earl of Warwick and pretender to the English throne.  However, he ultimately failed to replace Henry VII as king of England, despite Anglo-Irish support

1536:  The abbey was dissolved and its abbot, John English, was granted a pension of £15

1537: It was discovered that Abbot John had taken away goods to the value of £35.  Thomas Agard, was granted the hall, roofed cloister, chambers and other buildings

1552: Bective was granted to Andrew Wyse, Vice-Treasurer of Ireland

After 1619: Sebastian Shortall (d.1639) was a Cistercian poet who became abbot of Bective Abbey after this date.  The community had been living in hiding in the local community since its dissolution in 1537

There was a story of a golden coffin that had been buried in Bective Abbey. A local man named Andy Gossan knew of its whereabouts, passing this information on to his elderly sister, Ann, on his deathbed. She in turn told the parish priest of Kilmessan, Fr. Morrissey, who took the secret to his grave, when he died in 1927, aged 86.

This story was recorded by a schoolgirl, Rosie Connell in 1938 and is now part of the duchas.ie Schools’ Collection.