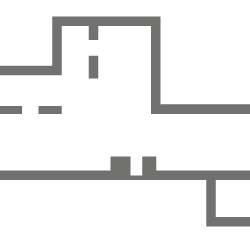 Athenry Dominican priory was one of the great Dominican foundations in Ireland, founded by Milo de Bermingham c.1241.  Located 25km to the east of Galway city, the priory initially stood on the outskirts of the town walls of Athenry but was eventually enveloped by the town walls. Athenry priory was a dynamic building, undergoing several phases of construction that revealed the shared patronage of the Dominicans between Gaelic Irish and Anglo-Norman benefactors.   The names that feature on the grave slabs of the church and within the fifteenth-century Athenry register are further proof of this.  The quality of architecture and art evident in Athenry are testament to the significant patronage the Dominicans enjoyed and were likely a reflection of de Bermingham wealth and power.   The church was held in high regard, serving as burial places for nobles such as de Bermingham, and several bishops of  Clonfert and Kilmacduagh.  Athenry priory was granted to the Earl of Clanricard in 1568 by Elizabeth I for use as a burial grounds before the buildings and their lands were granted to the town of Athenry in 1574.  The town suffered greatly during the late sixteenth-century and the Dominicans were forced to seek a new site for a priory near their old foundation from the earl of Clanricard in the 1620s.   They temporarily reacquired their old priory in 1685 but lost it again during as a result of the exile of the bishops and regular clergy (which included Dominicans and Franciscans) in 1698.

The founder of Athenry priory was Milo de Bermingham (d.1252), who purchased the site from Robert Braynach for 160 marks, providing the same sum for construction costs, in addition to supplying his own men-at-arms to assist with construction.  The Dominicans also received English cloth, wine and horses from de Bermingham.    Despite de Bermingham’s patronage, the majority of the buildings of the priory were as a result of the generosity of local Anglo-Norman and Gaelic lords.

The seventeenth-century Irish historian, Sir James Ware, established links with the priory. In 1622 he enquired about obtaining the Annales dom[us] fr[atru]m Praedicator[um] Athenriae’ and seemingly befriended Manus McAward, ‘an old friar there’. Despite the political turmoil of the 1640s, moreover, Ware received a copy of the Register of the Dominican Order of Athenry with the approval of the friary in October 1646.

The surviving Register of Athenry details the gifts from the other patrons of the priory;  Felim O’Conor (Feidlim Ua Conchobair) (d.1265), king of Connacht, build the refectory, Eugene O’Heyne bequeathed the dormitory, the chapter house was given by Cornelus O’Kelly, the cloister by Walter Husgard, the infirmary by Arthur McGallyly, a theological school by Florence Mac Flainn (d.1256), Archbishop of Tuam, and the guest-house by Dermot O’Trarasay.   The Athenry register also mentions a Donaldus O’Kelly who built a wall between the monastery and the town in the mid-fifteenth century, enclosing the convent grounds within the town walls.

Athenry was once one of the most impressive Dominican foundations in medieval Ireland, but today only the ruins of the priory church survive. The priory lies to the south of the thirteenth century de Bermingham castle, with the church consisting of a chancel, nave, tower (only of the south piers of which remain), northern aisle, an aisled north transept and an adjoining sacristy building to the south of the chancel.

It retains many thirteenth-century features, in addition to a large number of multi-period grave-slabs, both within the church building and scattered around the graveyard. There are no upstanding remains of the cloister or domestic ranges.

Most of the chancel and the nave were built during the initial phase of construction of the priory from c.1241 onwards.  The nave features a number of tomb niches featuring motifs associated with the so-called ‘School of the West’ style of architecture in Ireland, which dates them to the first phase of construction in the thirteenth century. The survival of the medieval register of the priory has made it possible to identify which patrons paid for specific architectural features of the church and its structural development: the north aisle, transept, tower were built and the chancel extended in the fourteenth century, while wall tombs and window tracery in the aisle and the chancel can be dated to the fifteenth century.

1241: Likely foundation date for the priory

1241:  The priory of SS. Peter and Paul was founded, with Milo de Bermingham (Meiler Mac Feorais) providing land and money for the building

1242:   A provincial chapter was held at Athenry

1252:  Milo (Meiler) de Bermingham was buried in the church. De Bermingham had most likely granted Athenry town its liberties (jurisdictions or rights of local government)

c.1312:   The church was a celebrated burial place for the founder’s descendants and others. Several bishops of Clonfert and Kilmacduagh were interred there. William, the founder’s son and archbishop of Tuam between 1289 and 1312 was buried in a splendid tomb, beside his father. He had been involved in a serious dispute with the friars in 1297

1376: Thomas de Bermingham died and was buried in the Dominican priory in Trim in this year but his body was recovered and was reburied in Athenry priory by two friars, John Walleys and John Michel

1400:   An indulgence was granted for the preservation of the fabric

Post 1408:  Joanna de Ruffur funded the glazing of the east window and a number of other windows in the choir

1451:  The friars built a chapel on land north of the river called Carrowardahrah in Toulubane, granted by Ulick Rufus de Burgo

1541:   In July, Adam de Coppynger was custos and the Lord Deputy allowed him and his brethern to remain undissolved, provided that they changed into secular habits, as they lay among the ‘Irishry…amongst dissobeysence’

1555:   The friars received a further grant of land

1568:   Queen Elizabeth directed that the Earl of Clanricarde could preserve the friary for a burial place

1574:   The friary, with 30 acres in Athenry and 12 acres in Ballidana, was granted to the town. In that year, the town and friary were sacked by Clanricarde’s sons

1585:   John de Burgo the younger was seized of the friary lands of Killokelly

1595:   The friars reoccupied the buildings, which were spared when Red Hugh O’Donnell took Athenry

1597:   The town and priory suffered severely in the wars at the end of the sixteenth century and the whole town was burned

1622 – 1685:   Fr. Ross Mageoghegan, the Provincial (appointed 1622), and other friars asked Ulick Burke, Earl of Clanricarde, for a site near their old friary, and they were given an isolated site between two lakes, called Coilascail (Brosk), near Esker; here they built a small friary and began to take novices, following the Regular Observance and later establishing a school of study. They recovered the old priory in 1685, retaining it until the general exile of 1698.

1646:  Sir James Ware received a copy of the Register of the Dominican Order of Athenry with the approval of the friary in October 1646.

1651:  A number of Dominicans were killed during Cromwell’s conquest of Ireland, including members of the Athenry priory; Frs Vincent Gerald Dillon, Stephen Petit and John O’Quillan and Brs James O’Moran, Dominic Black and Richard Hovedon

1706: Fr John O’Heyne, author of The Irish Dominicans of the Seventeenth Century, resided at Holy Cross in Louvain, (modern day Belgium) having fled Ireland in 1698

18th Century:  The Dominican priory in Athenry was gutted to provide materials for the military barracks which was built on the site.  Only the church remained in tact