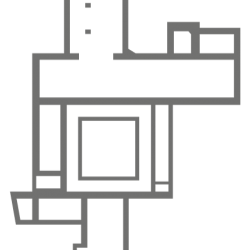 The Franciscan friary of Askeaton lies by the river Deel, to the north of the village of Askeaton, Co. Limerick and the impressive castle of the Earls of Desmond, which stands on a rocky island in the centre of the town. The friary was founded either in 1389 by Gerald Fitzgerald (1335-98), 3rd earl of Desmond and Lord Justice of Ireland, or in 1420 by James Fitzgerald Fitzgerald (c.1380–1462), 7th earl of Desmond. The extensive remains of the friary and its surroundings represent an imposing medieval architectural landscape that was probably planned intentionally in the early fifteenth century. The friary’s cloister is intact and an image of St Francis is carved into the cloister arcade to remind the Franciscan friars of their patron saint as they went to and from Divine Office.

While it is uncertain who the founder was, the friary was closely associated with the powerful Fitzgeralds of Desmond, whose fortunes rose during the fourteenth and fifteenth centuries, before being wiped out during the failed Desmond Rebellion of the 1580s.  The suggested foundation date of c. 1400 relies upon a grant of indulgence by Pope Boniface IX (1389–1404) to anyone visiting or giving alms to the friary of ‘Inisgebryny’ in the Diocese of Limerick, which may refer to Askeaton. At this time, Gerald Fitzmaurice Fitzgerald, 3rd earl of Desmond (d. 1398) might have brought the friars to the town. Gerald was a poet who composed courtly love poetry in the Irish language.

Other sources suggest the more likely foundation date of 1420, when the friary became a burial place for the Fitzgeralds. If so, Gerald’s son, James Fitzgerald Fitzgerald (c.1380–1462), 7th earl of Desmond was the friary’s first main benefactor. The Fitzgeralds were associated with the foundation of many mendicant houses throughout Ireland, including Youghal, Clane, Clonmel and Kildare for the Franciscans and Sligo, Tralee and Youghal for the Dominicans.

The Franciscan friary at Askeaton is an impressive foundation, due to its size, the extent of its remains and its proximity to the impressive ruins of the nearby Desmond castle.  Both friary and castle may have been built as part of the same urban building campaign. The church and its north transept, sacristy, cloister arcade and domestic buildings all survive, including the top floors of the east and west ranges. One of the most striking features of the friary is its beautiful fifteenth-century cloister arcade, with a devotional carving of St Francis showing the stigmata.  There is a medieval hospice within the friary’s precinct.

Among the detailed features are an elaborate sedilia in the south wall, three altar-tombs of similar design, probably built for the Desmond family or other prominent patrons, a Mass dial in the cloister and a wall painting of Christ as the Man of Sorrows.  A medieval wooden statue of the Madonna and Child and three medieval bells from Askeaton are now in the National Museum of Ireland, Dublin.

1389:  The possible foundation of the friary at Askeaton by Gerald Fitzmaurice Fitzgerald, 3th earl of Desmond and Lord Justice of Ireland

1441: Matthew MacEgan, member of the prominent family of lawyers, became the friary’s lector (the friar charged with the formation and training of candidates for the priesthood) on return from his studies in Bologna (Italy)

1460: Turlough MacMahon built a tomb for himself and his family in the friary

1491: The friars of Askeaton won their case against the friars of Ennis who were accused of hindering their fellow Franciscans in seeking alms

1513:  The friary was given to the Observantines by the Provincial, Fr Patrick Healy

1558:  In November, James Fitzjohn Fitzgerald, 14th earl of Desmond, was buried in the friary

1579-81: During the Desmond wars, the forces of Nicholas Malby, President of Connacht (c.1530-84) attacked the friary, expelling the friars. He killed a number of them, including the friars John Conolly (Cornelius) and William Tenal.  The church was desecrated and the tomb of James Fitzjohn Fitzgerald, 14th earl of Desmond was smashed

1586:  The possessions of the friary were listed as including: certain buildings, half an acre, a field to the north of the precinct, a watermill within the town, a fishing weir, the tithes from one of the fishing weir in Askeaton ‘the Earl’s weir’, namely the fish taken in the tides on one day and two nights in each week between 12 o’clock on Saturday and 7 o’clock on Monday

1627:  A number of friars came back to the friary and repaired it

1643:  The friary was re-established, at least until the Cromwellian conquest.  As there is no evidence of rebuilding at this time, it is most likely that the debris was cleared from the church, which was refurnished and reroofed

1661-1714:  Guardians of the friary were appointed with some regularity.  This continued down to 1872 but these were most likely in name only

c.1914:  Four bells associated with the friary were found buried near the entrance of the monastery by Gerald Moran, a local teacher

1992:  Bishop O’Healy and Fr. Rourke were among the sixteen Irish martyrs beatified by Pope John Paul II in 1992