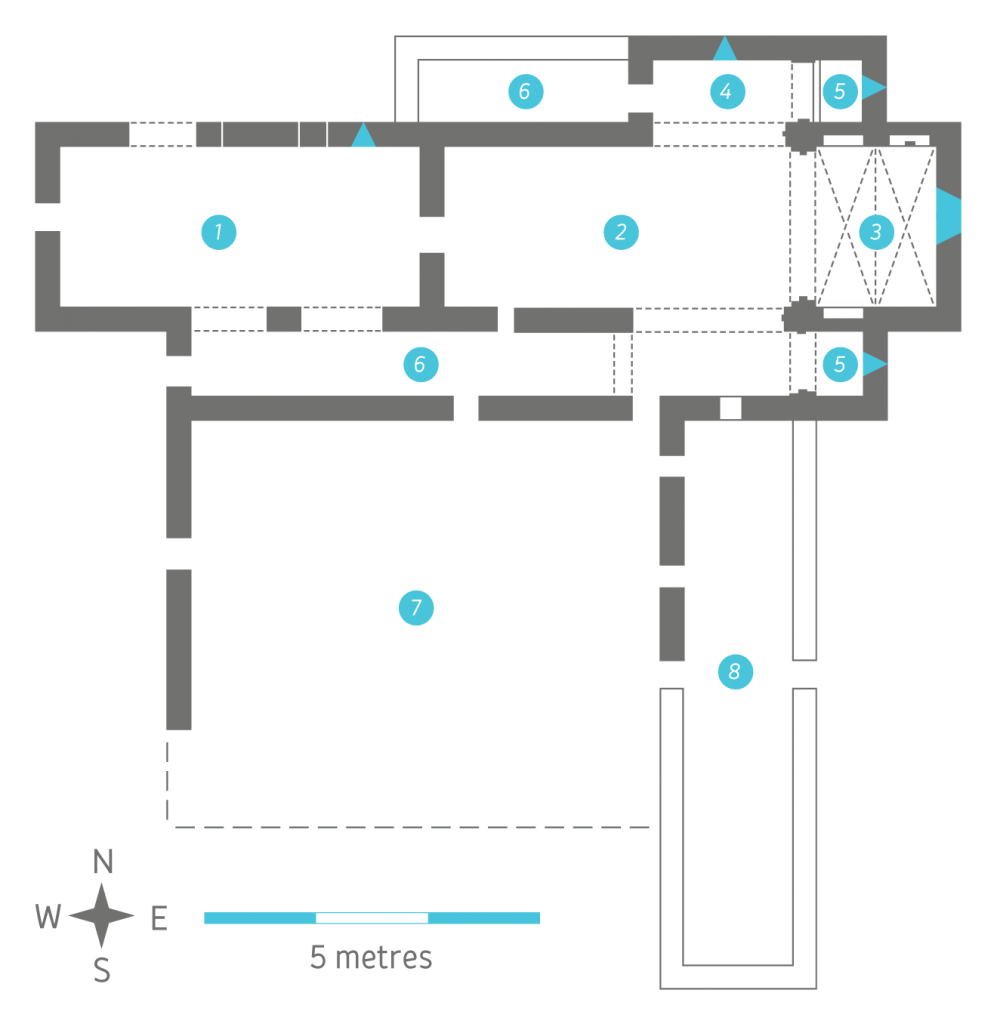 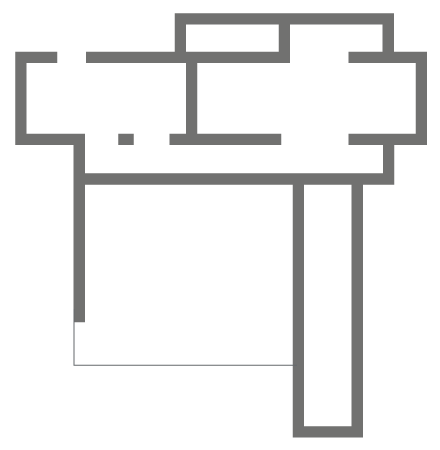 The small Cistercian abbey at Corcomroe nestle discreetly in the rocky landscape of the Burren, a location evoked in the name of the foundation – ‘St Mary of the Fertile Rock’ 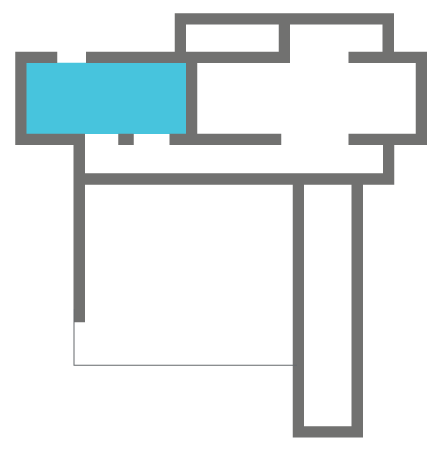 In the fifteenth century the abbey church was shortened, and the wall facing you when entering the church through the west doorway was built at that time. It includes a bell turret. 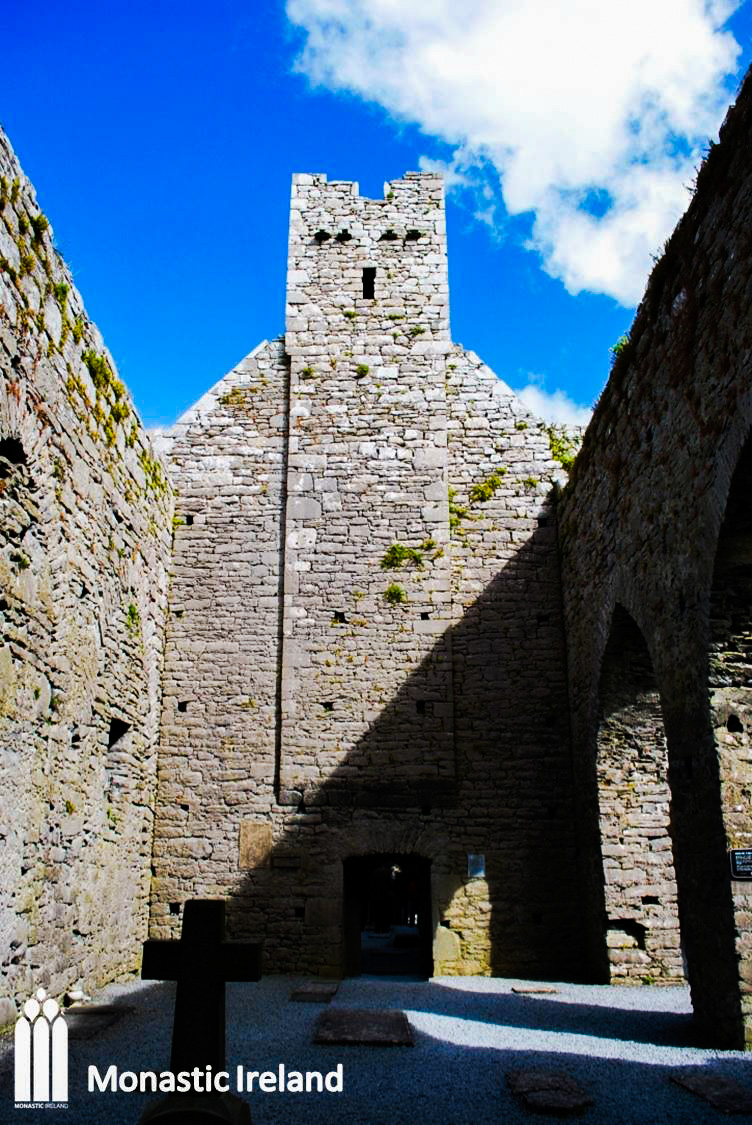 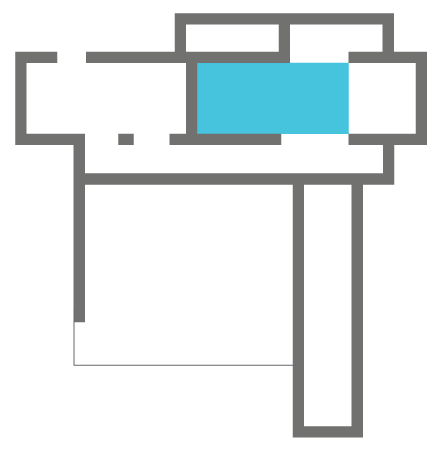 A view of the church chancel, which ends with the vaulted presbytery or sanctuary, where the high altar stood and the mass was celebrated. On either side are transepts, terminated by small vaulted chapels. 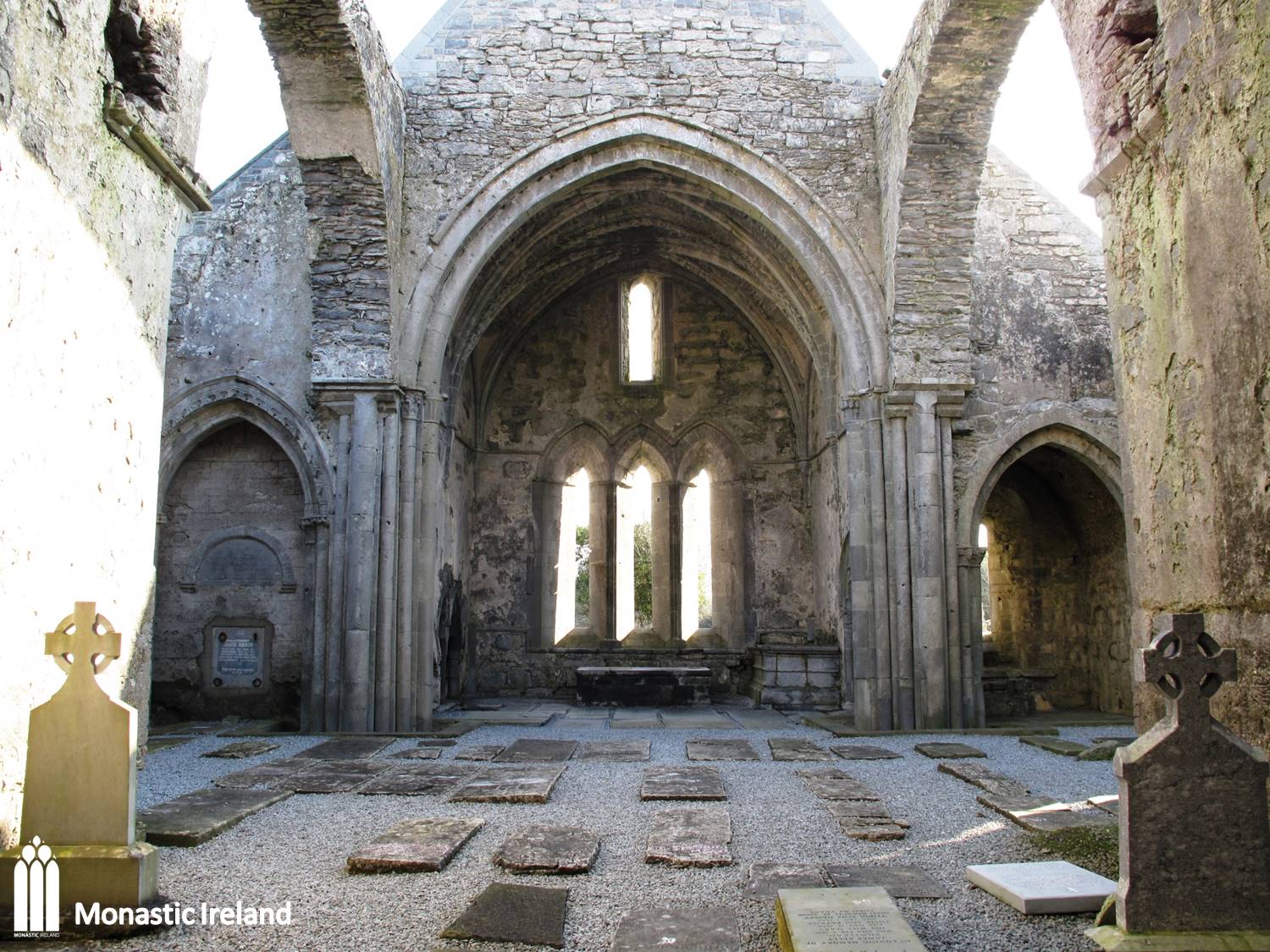 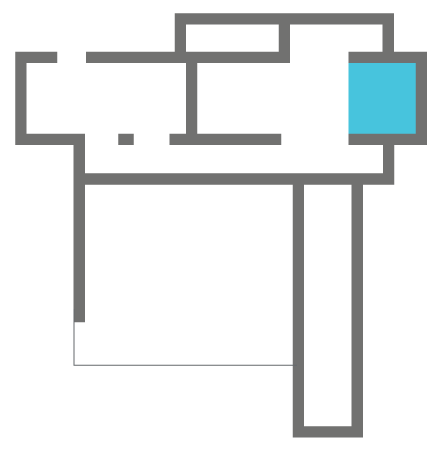 The presbytery lay at the east end of the chancel, located underneath the principal window, and contained the High Altar and the sedilia (or ornamental seats for the clergy officiating at Mass).

The presbytery is the part of the chancel underneath the principal window, where stood the High Altar and the sedilia or ornamental seats for the clergy officiating at Mass.

A view of the sedilia in the presbytery or sanctuary of the chancel, in the south wall. The capitals of the two columns are decorated with palmette ornaments, a very common decorative carving in the west of Ireland during the first half of the thirteenth century. 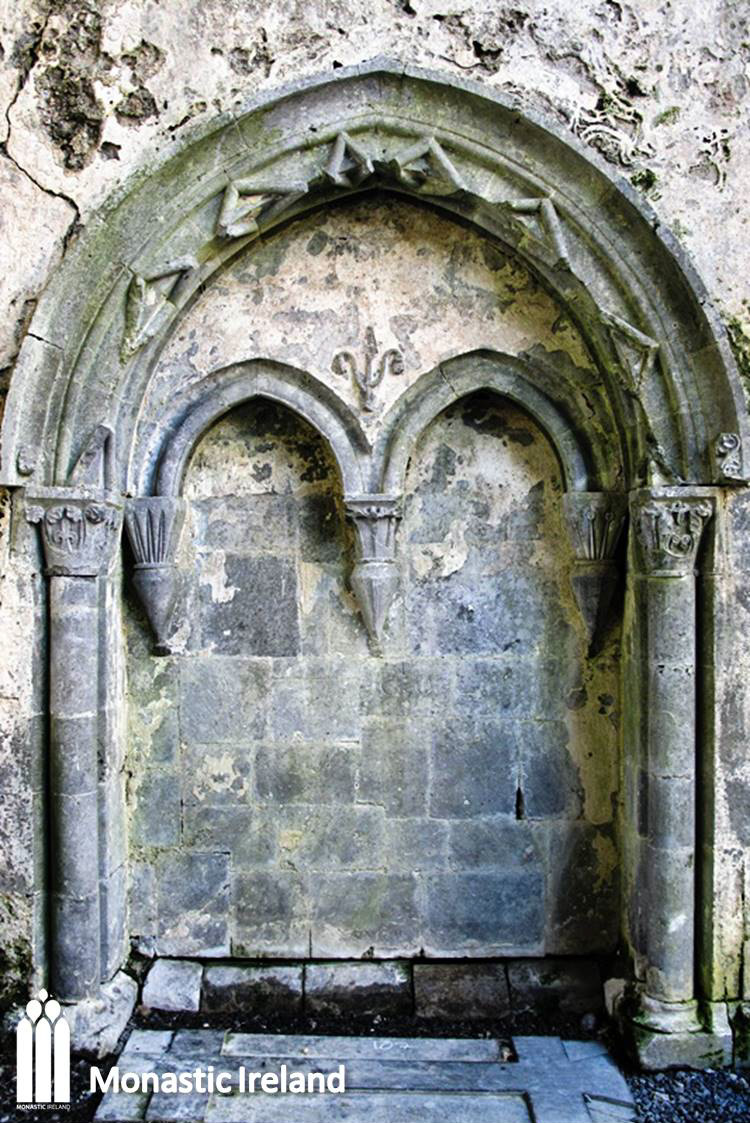 A view of the north wall of the chancel sanctuary, showing a double sedilia with decorated columns and cusped trefoil arches, next to a tomb-niche with a recumbent figure. This is the effigy of Conor na Siudaine O Brien, King of Munster and one of the abbey’s great benefactors (d. 1267). 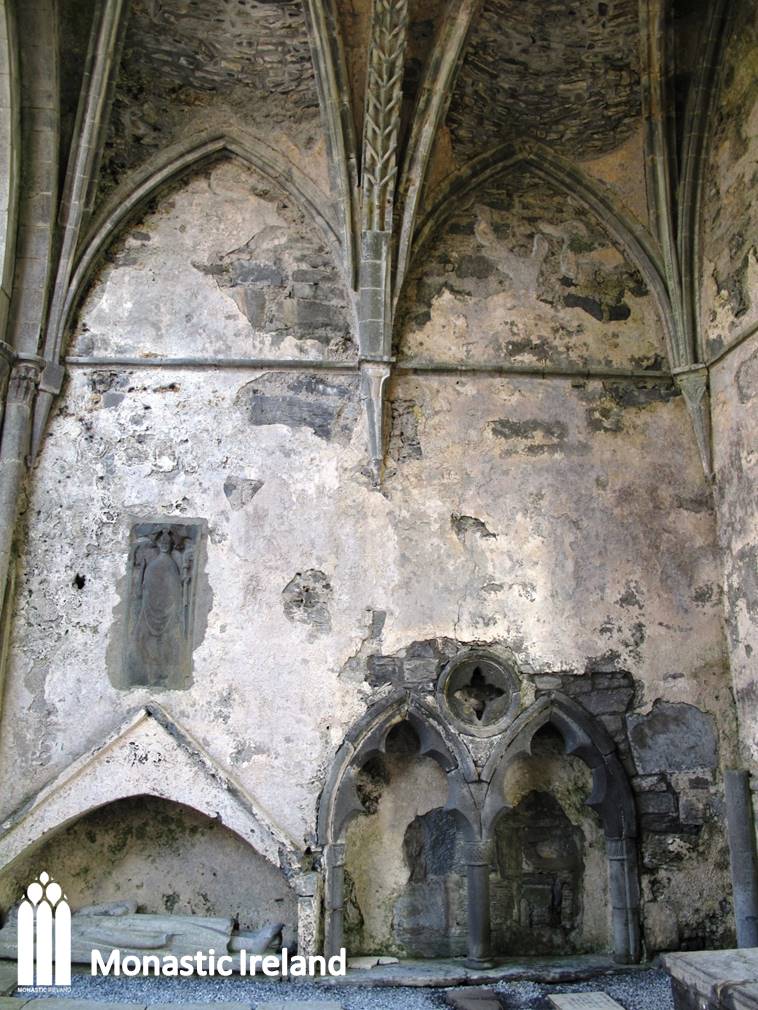 The figure of the smiling bishop stands above the tomb of Conor na Siudaine O Brien, King of Munster (d. 1267). 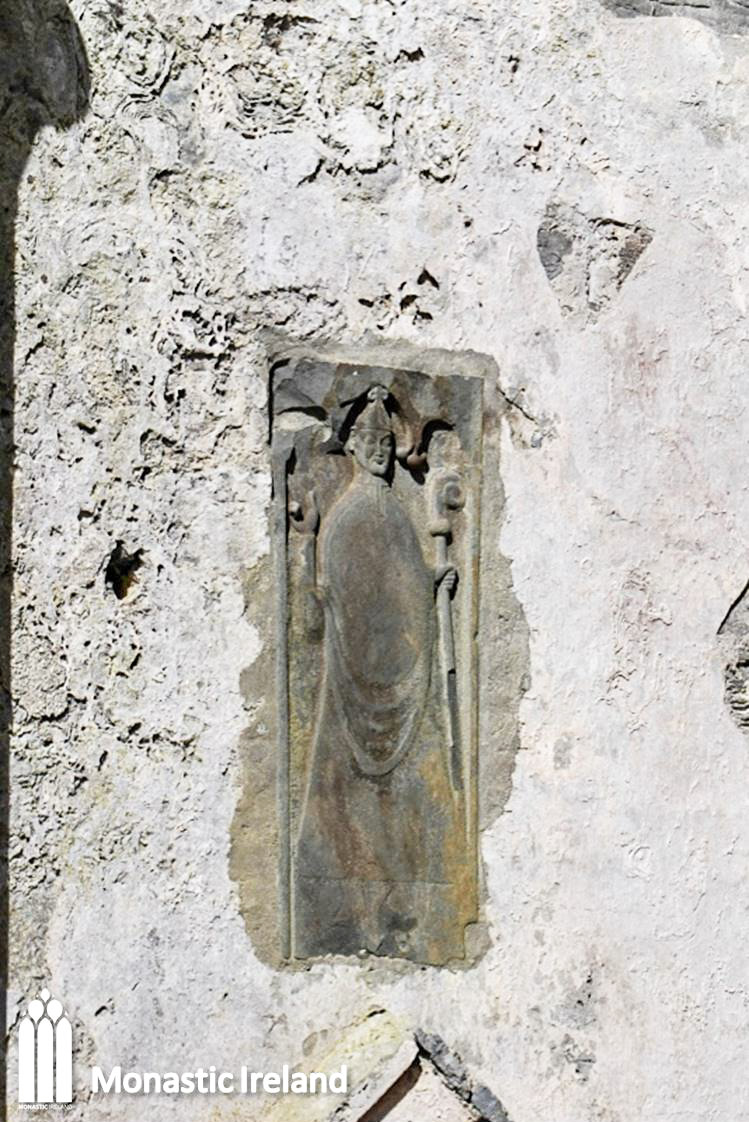 A view of the south wall of the chancel sanctuary, with another pair of sedilia. 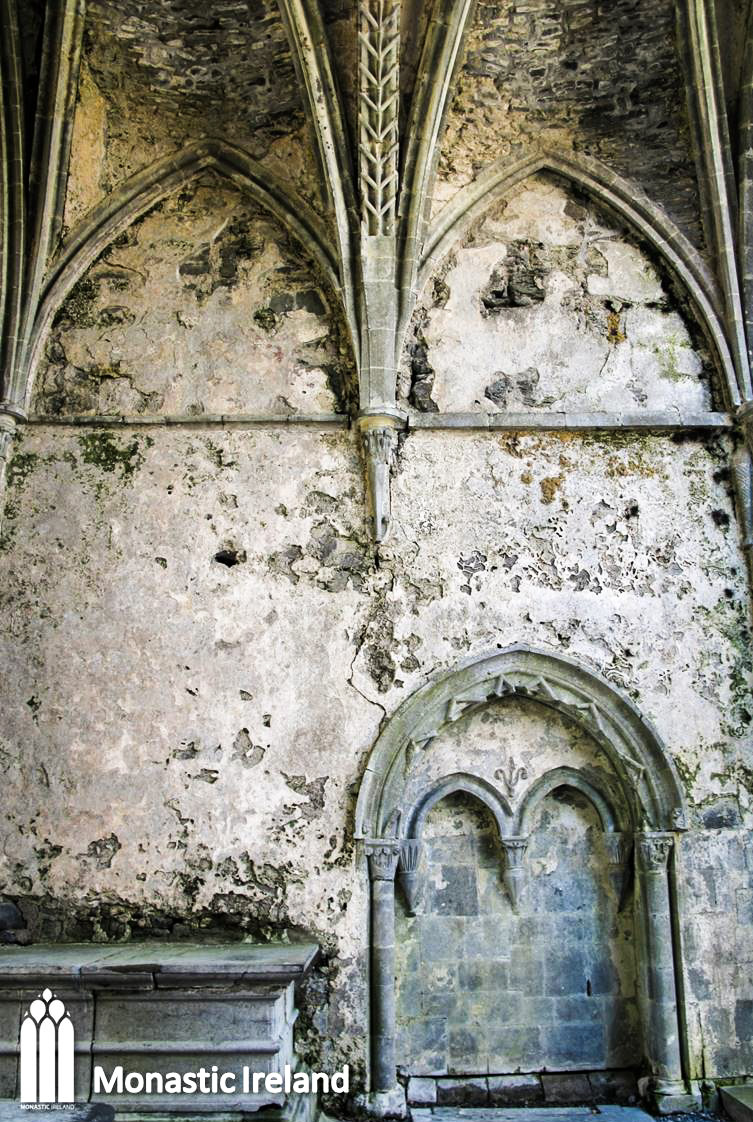 A view of the east façade of the church.
The builders of Corcomroe Abbey were clearly inspired by the church of Abbeyknocmoy, another Cistercian foundation located in Co. Galway, as the elevation of their east facades is basically the same: three lancets below a single lancet and a further lancet lighting the space between the vault and the roof. 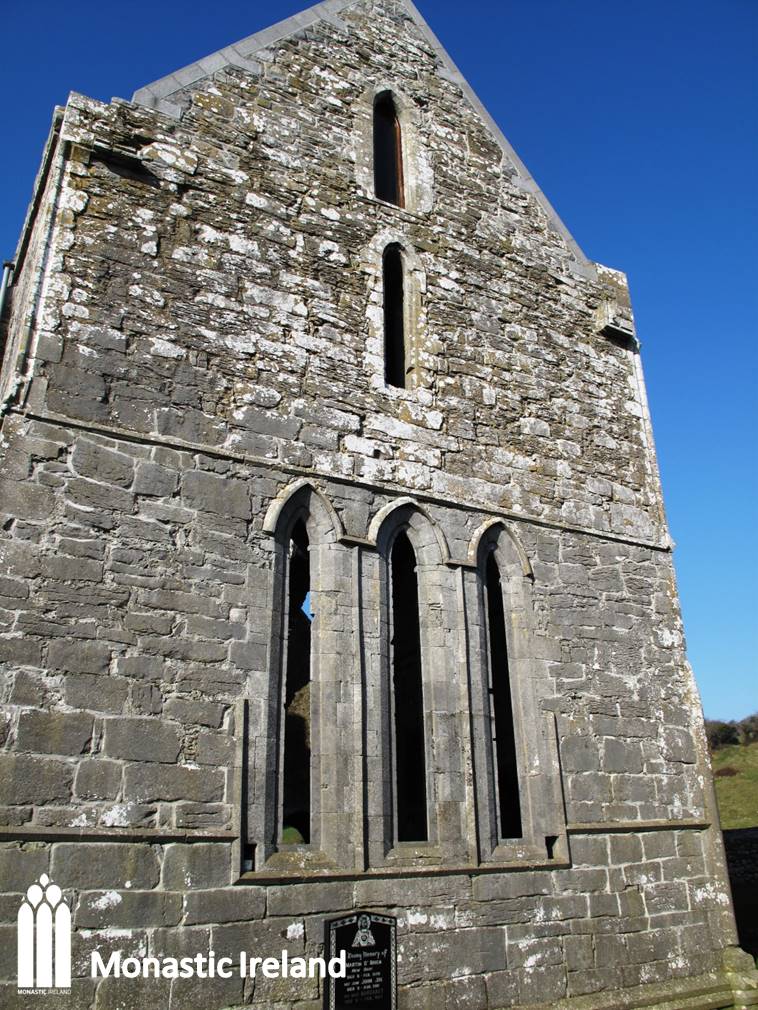 A closer look at the capitals on the south responds of the presbytery arch. The central capital depicts seadpods of opium poppy (only one remains intact at the bottom right of the capital), which was a common plant in medieval gardens, even though it is native of western Asia, and perhaps it was cultivated by the monks in Corcomroe’s garden. The bell-like flower seen on the top half of the capital might be the flower of the ‘deadly nightshade’, although it cannot be identified with certainty. 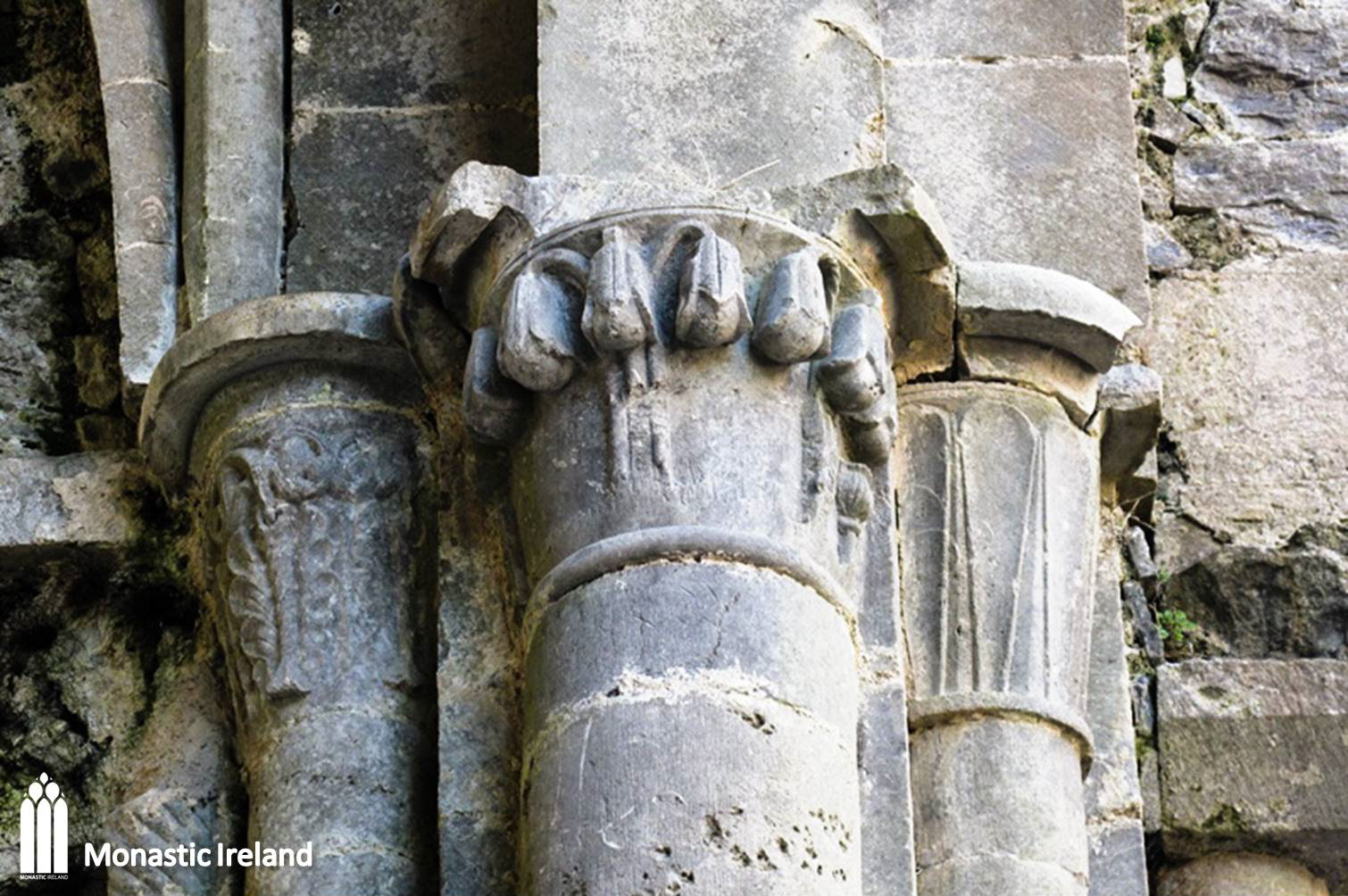 A view of the rib vault over the presbytery in the church chancel. The transverse rib (the central rib in this picture) was decorated with ‘herringbone’ chevron. 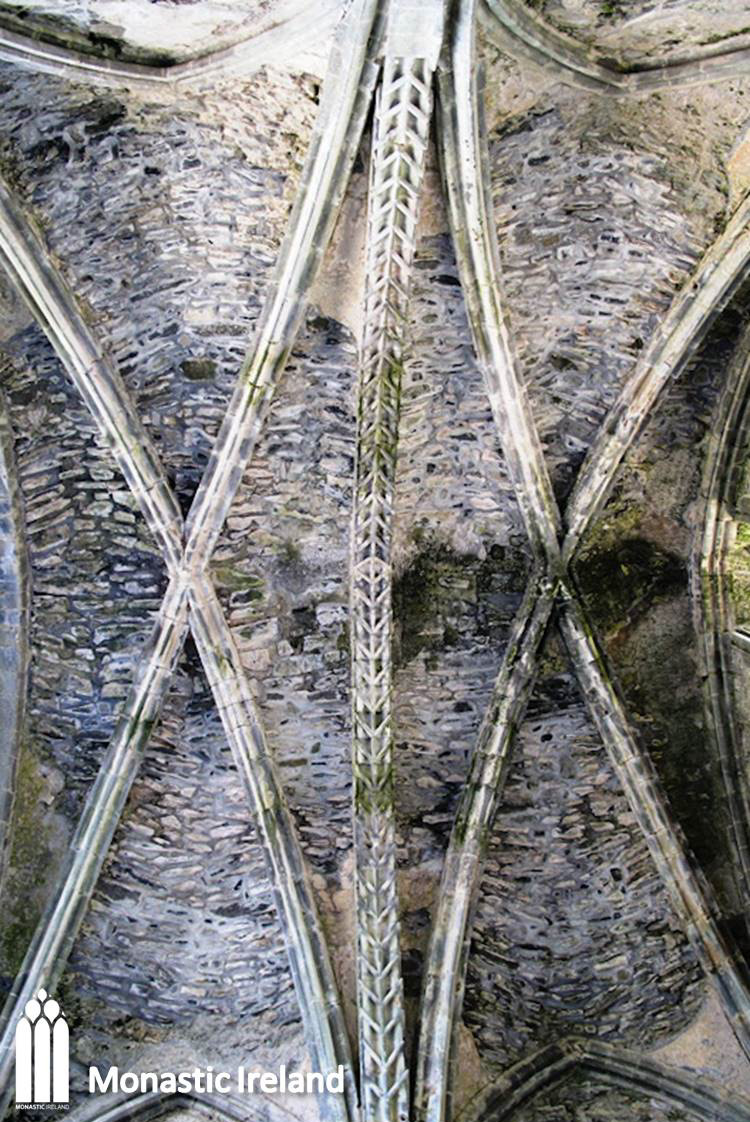 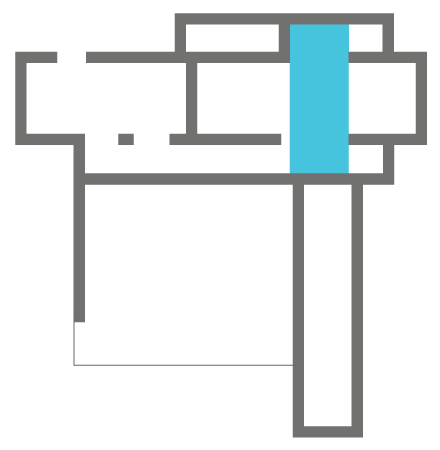 A view of the capitals on the south responds of the north transept chapel. The motif depicted here resembled an inverted fleur-de-lis, but unlike other capitals in the church, it is not directly modelled after a living plant. 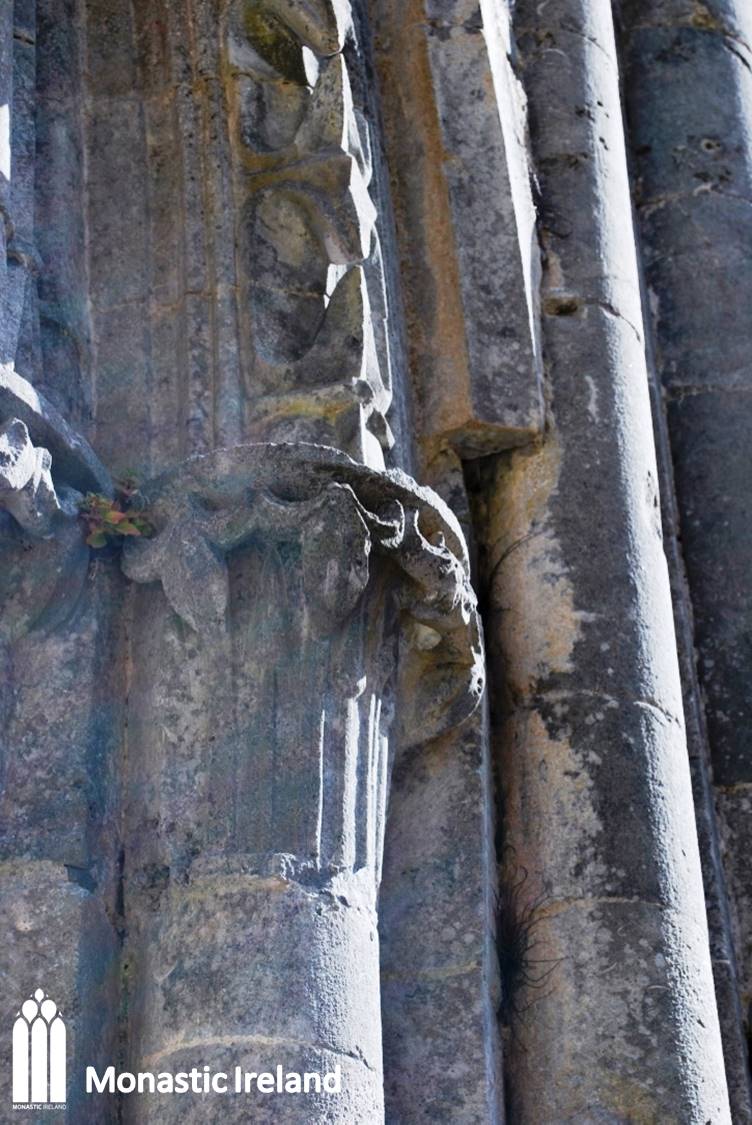 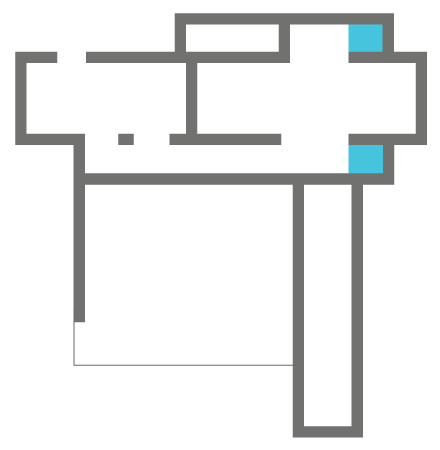 A close look at the capitals on the north responds of the south transept chapel. The capital on the left depicts the face of a man with tightly pursed lips which is characteristic of the west of Ireland. The capital on the right presents a stylized motif than the botanical carvings found on other capitals in the chancel. 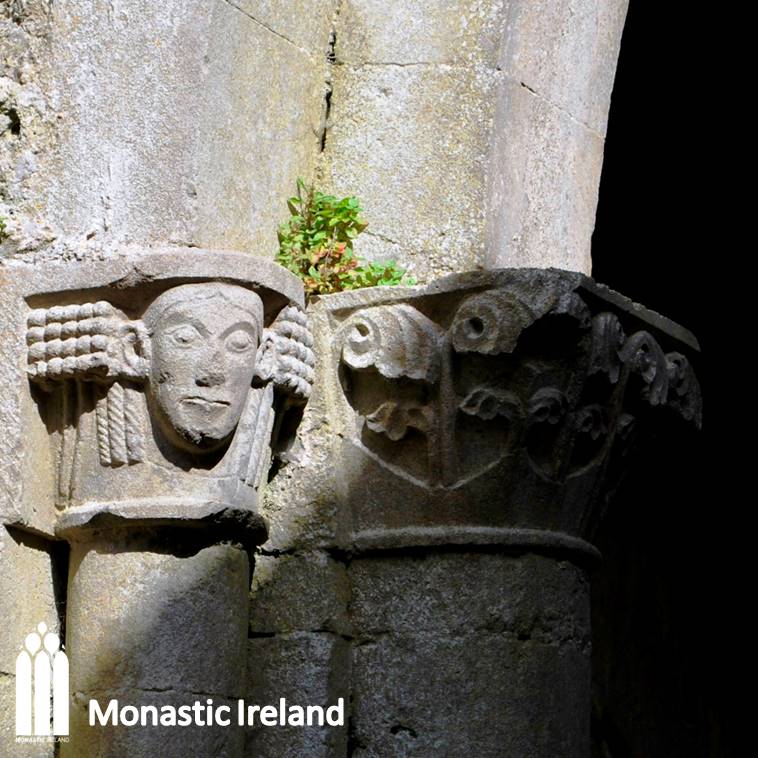 A close look at the capitals on the north responds of the north transept chapel, probably depicting lily-of-the-valley, which is not a plant native to Ireland, but which was already well regarded in medieval times for its perfume and medicinal properties. 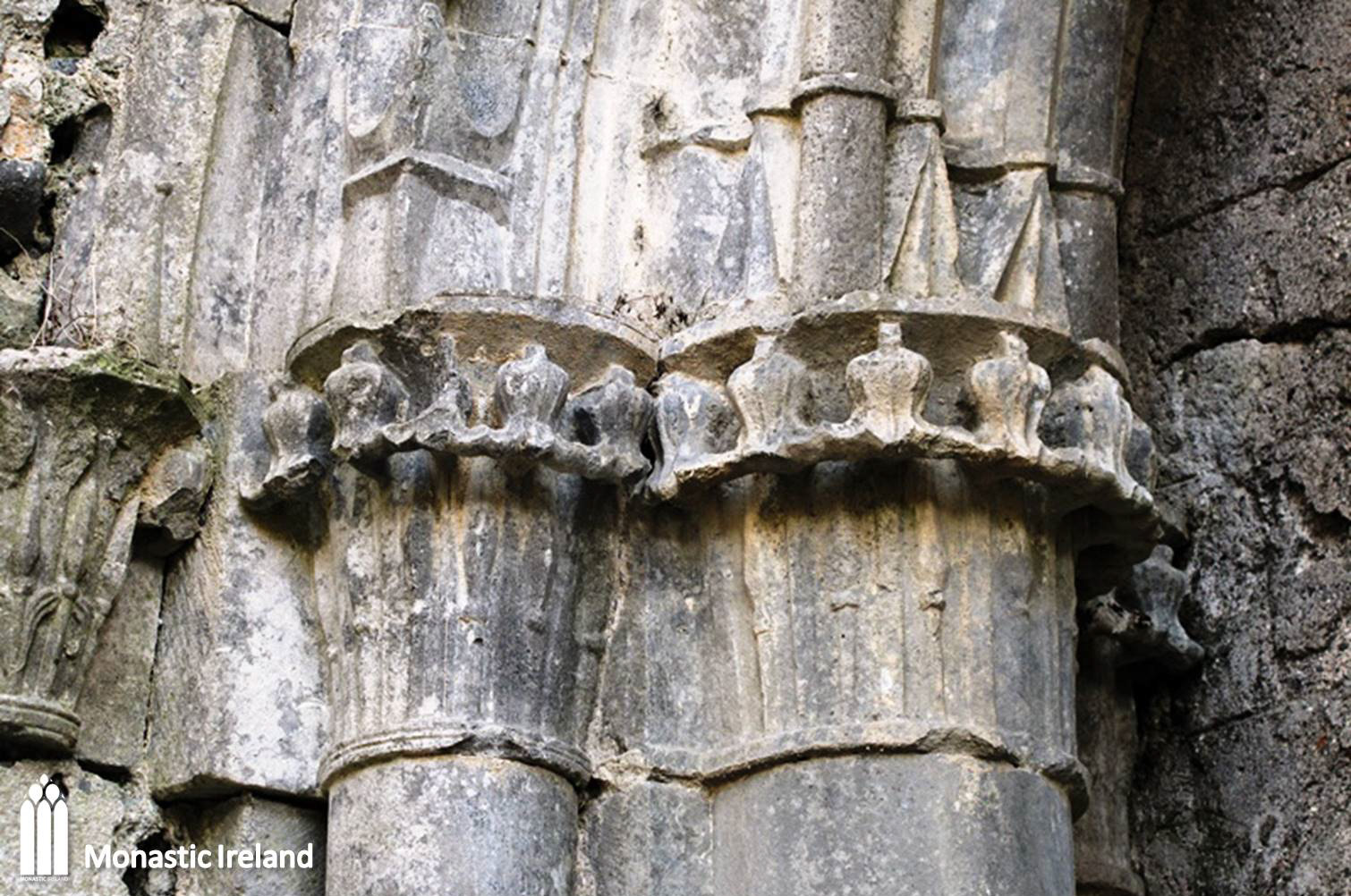 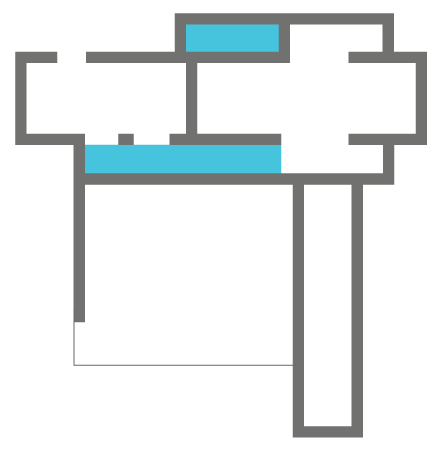 A view of the south aisle of the church, with the arcade giving into the nave on the right. This aisle, as well as the nave, or laybrothers’ choir, was built last. The crude character of the masonry, the simplicity of the design of the arcade, and the total absence of any decorative carvings – in stark contrast to the work in the monks’ choir - suggests that the abbey was experiencing financial difficulties. 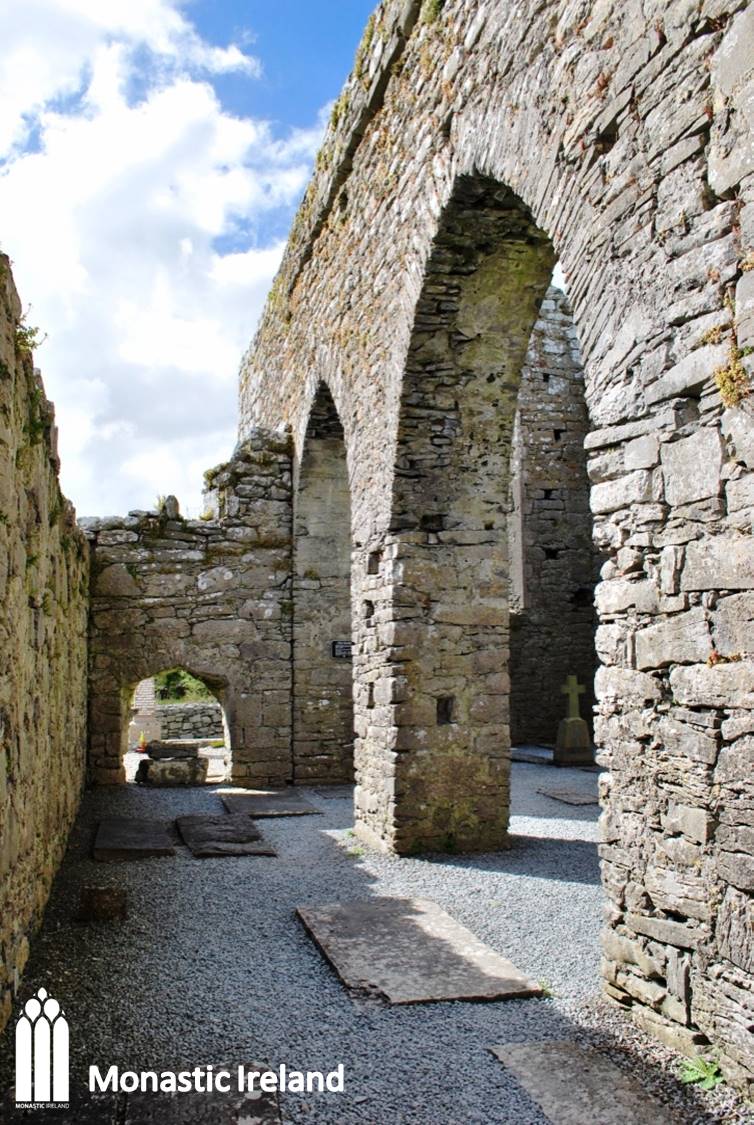 A view of the church east façade and north lateral aisle, transept and chapel. In the background behind the aisle can be seen the bell turret that was built in the fifteenth century atop the wall inserted in the nave to shorten the church. 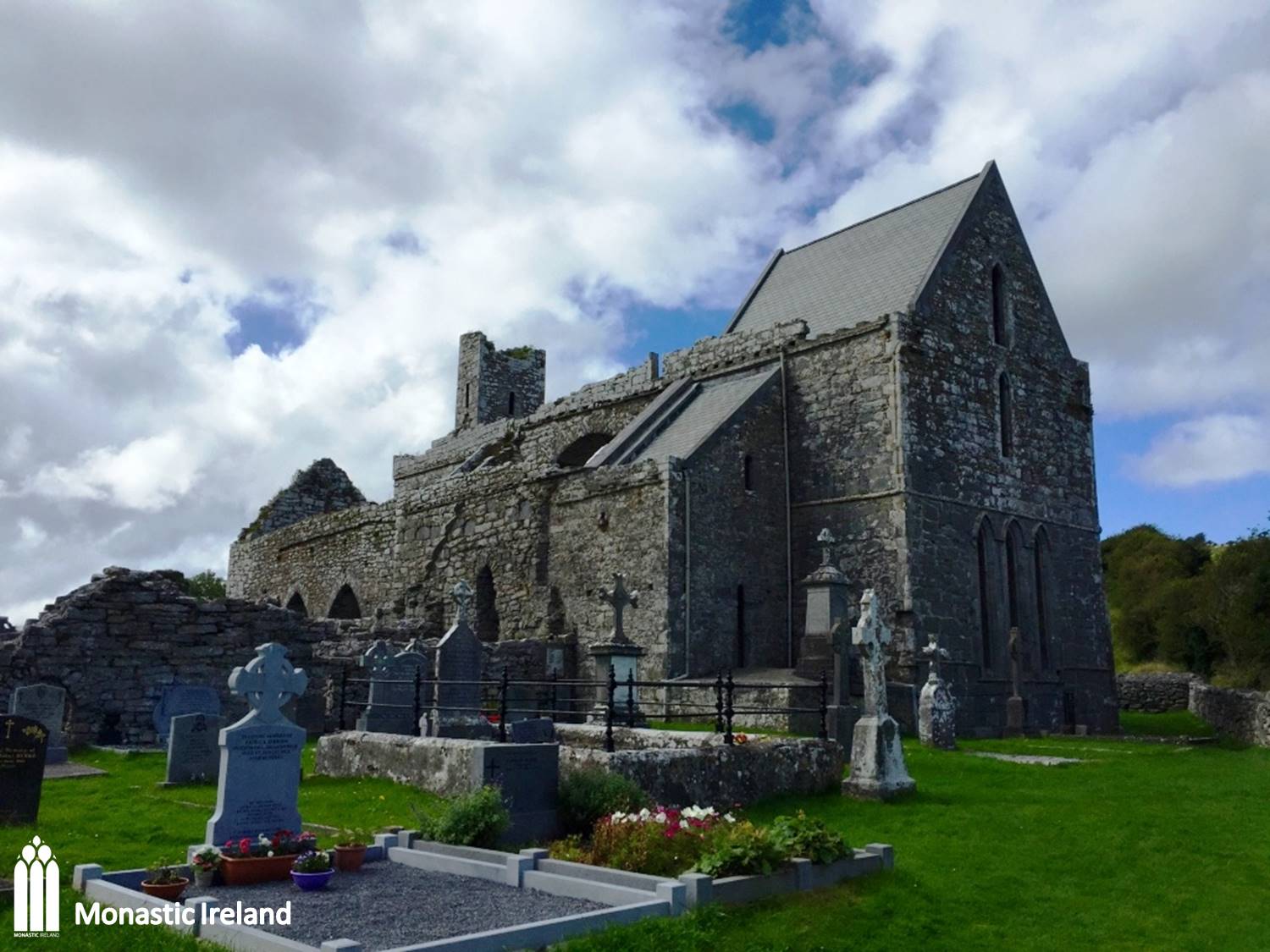 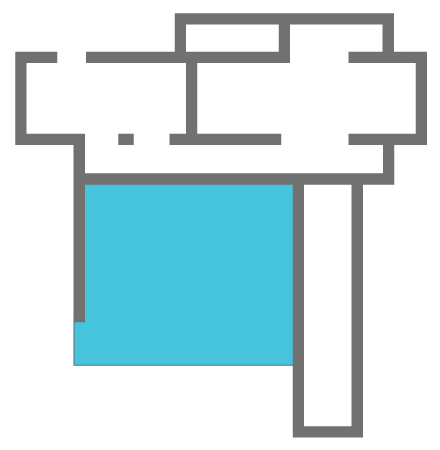 A view of the site of the cloister, to the south of the church. The cloister walk and arcade are gone, and the cloister garth is now used as a cemetery. 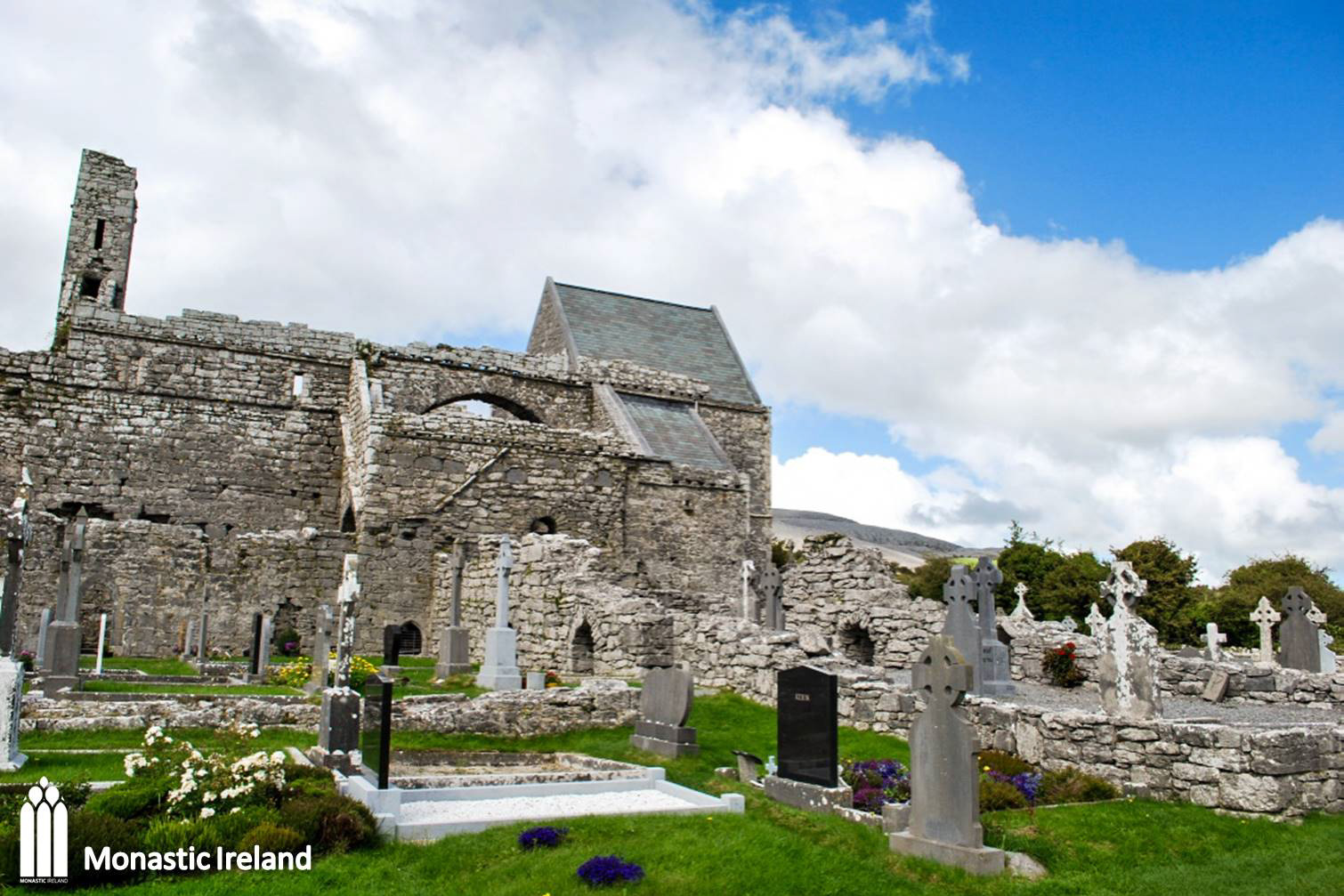 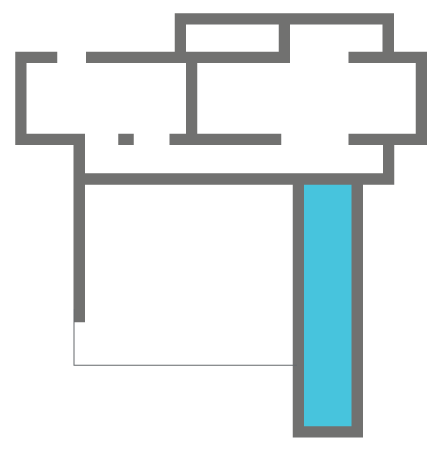 In a Cistercian context, the chapter room was often adjoined by a parlour, a small room or passage where the monks gathered to receive their work tools from the prior.