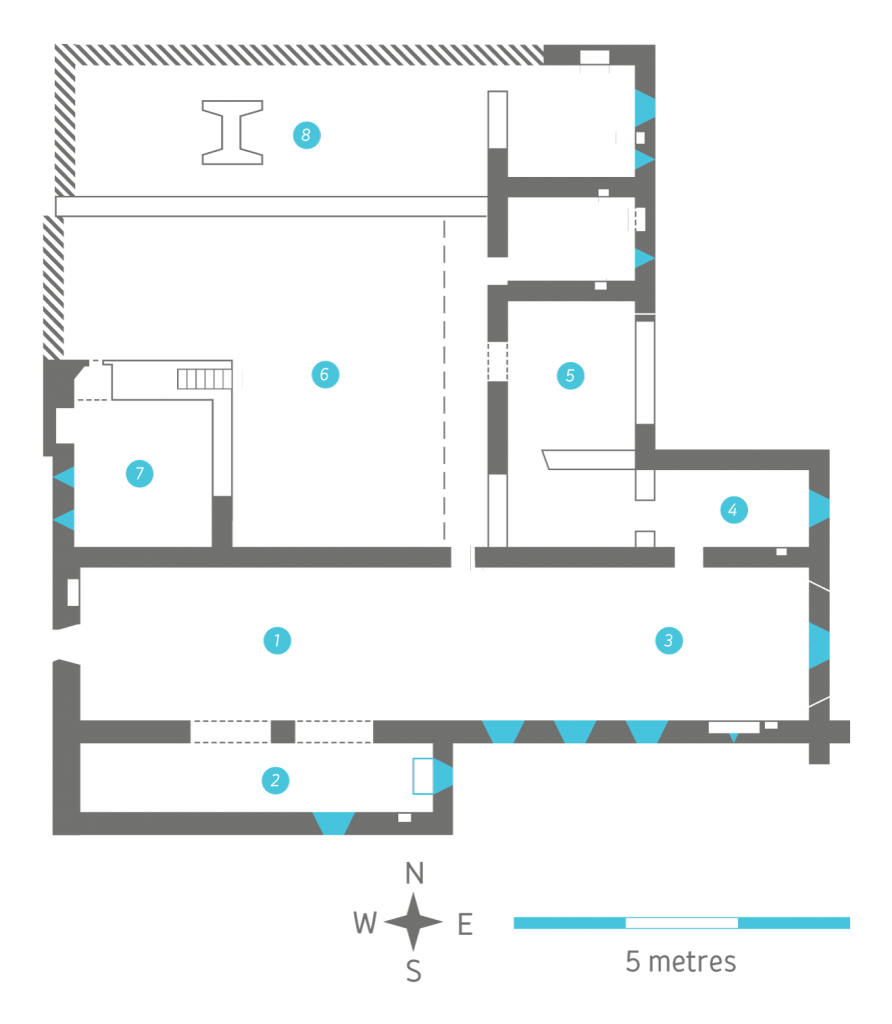 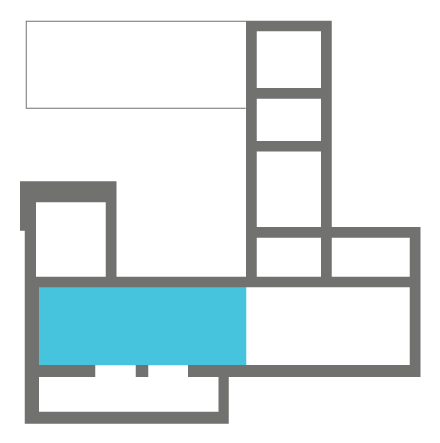 A view into the church nave. Unlike many late medieval mendicant churches, there is no evidence that a crossing tower was ever built in Burriscarra, which would have structurally divided the church between the choir of the friars, and the nave where the laity stood. However, it is likely that some form of structural division existed, perhaps a wooden screen with a central opening, through which the laity could witness the elevation of the host during the Eucharist. 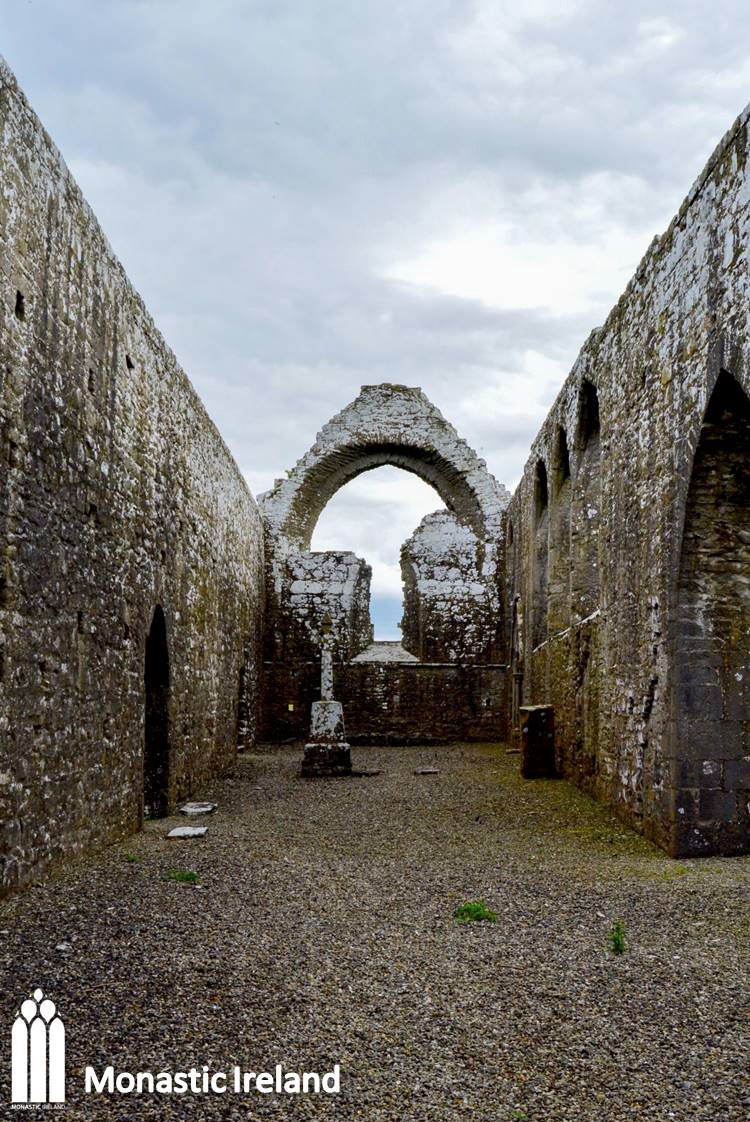 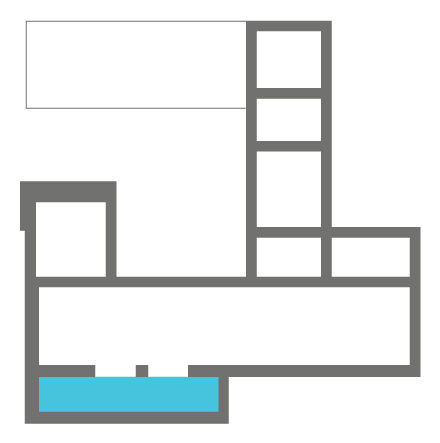 A view of the south aisle of the nave, a common feature in mendicant churches. It was separated from the nave by two pointed arches. 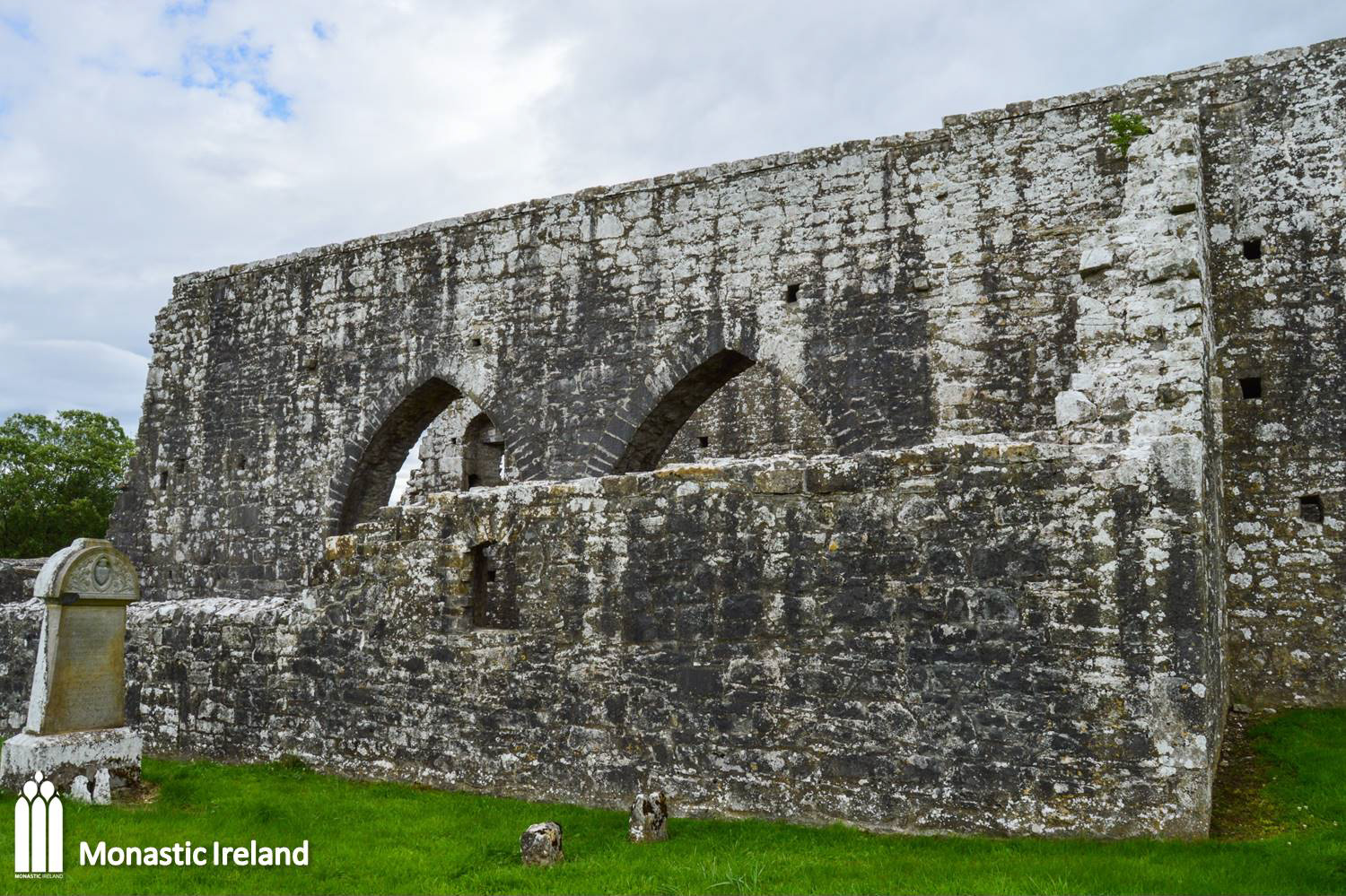 A view into the nave’s south aisle, separated by two very simple pointed arches without any decorative mouldings, and a pillar with no base or capital. The only ornamental element is to be found in the double-light window in the east wall of the aisle, decorated with simple curvilinear tracery. Under the window is the remains of what look to have been a secondary altar. While in a mendicant context chapels were often found in larger structures abutting the nave (the so-called single-armed transept), side aisles could also house small chapels, and represented an additional space where benefactors could be buried. 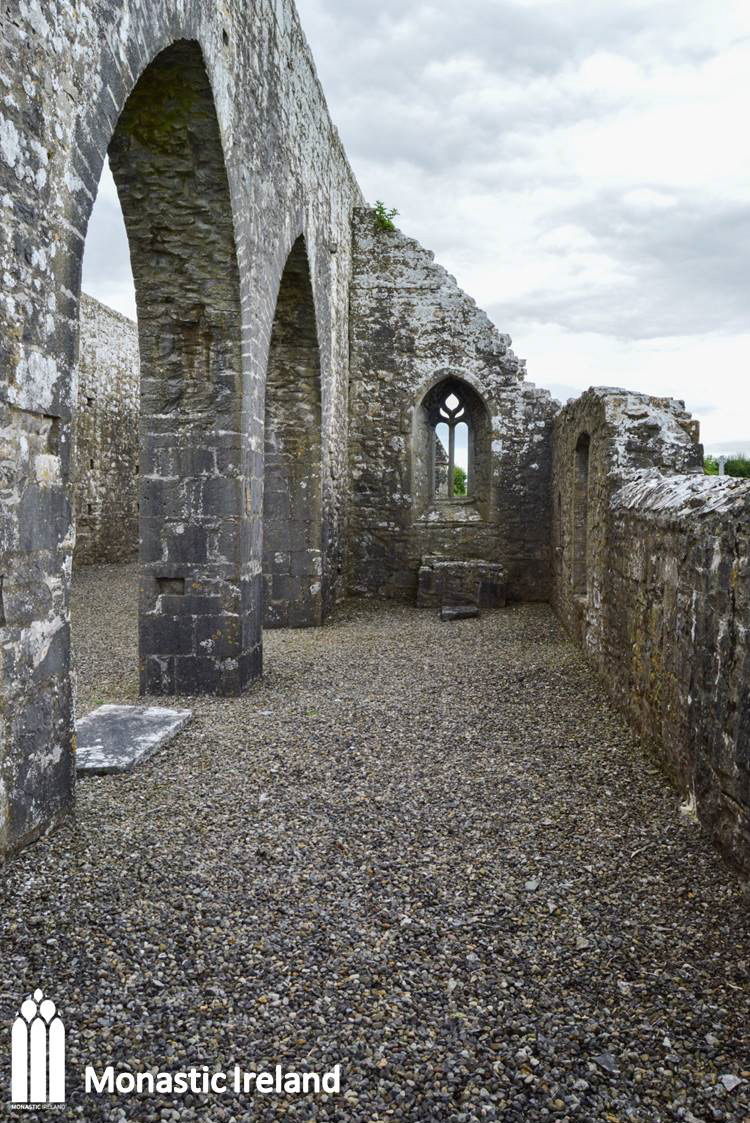 This piscina is placed in the south wall of the aisle at its east end, and likely associated with the secondary altar there, where the friars could say private masses for the benefactor or benefactors who supported the maintenance of the chapel. 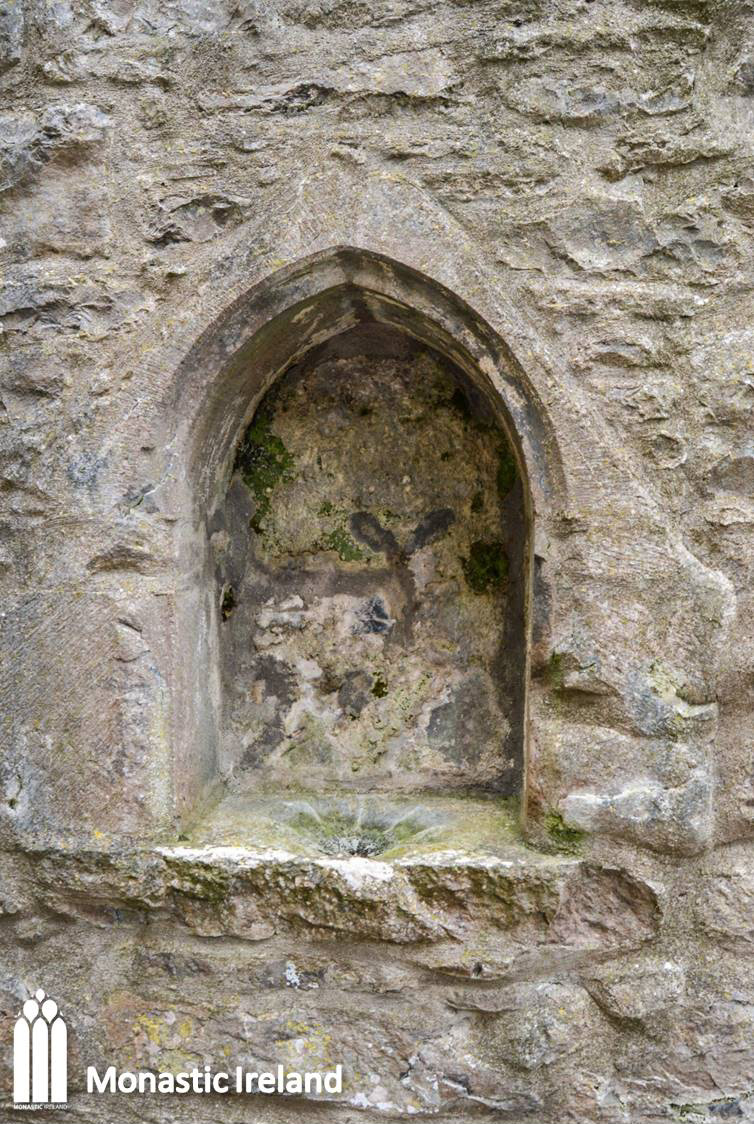 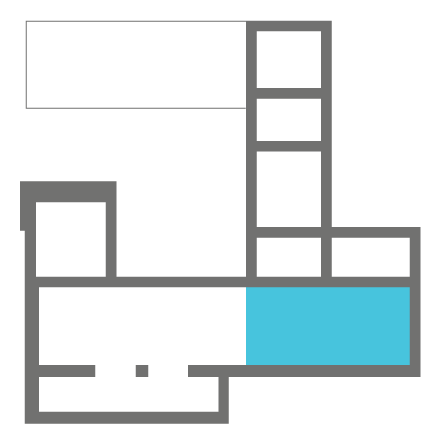 A view of the south elevation of the chancel. The tracery of the three larger windows is mostly gone although their width and the small sections of tracery that remain suggest they would have been two or three lights, in contrast to the opening in the east end of the wall, a trefoil-headed single light, which might suggest the east end of the church might be earlier in date. 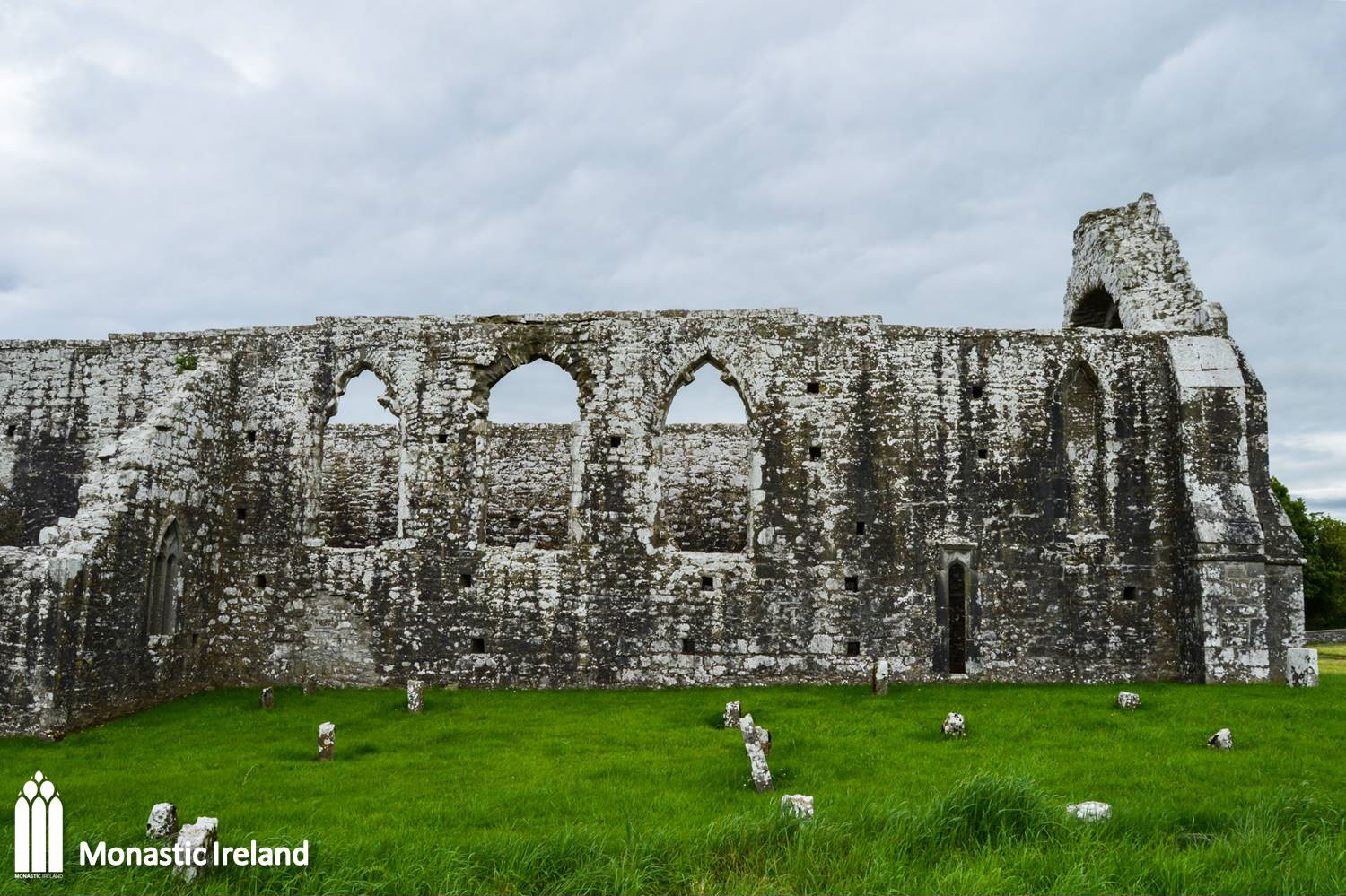 In the south wall of the church chancel are two elements found in virtually all mendicant churches: a piscina, and sedilia where the officiating clergy sat during services. In Burriscarra, the latter is comprised of a low ledge beneath a trefoil-headed arch with roll-mouldings and a single light window in the background. The hood moulding framing the sedilia features very weathered carved heads at each end. 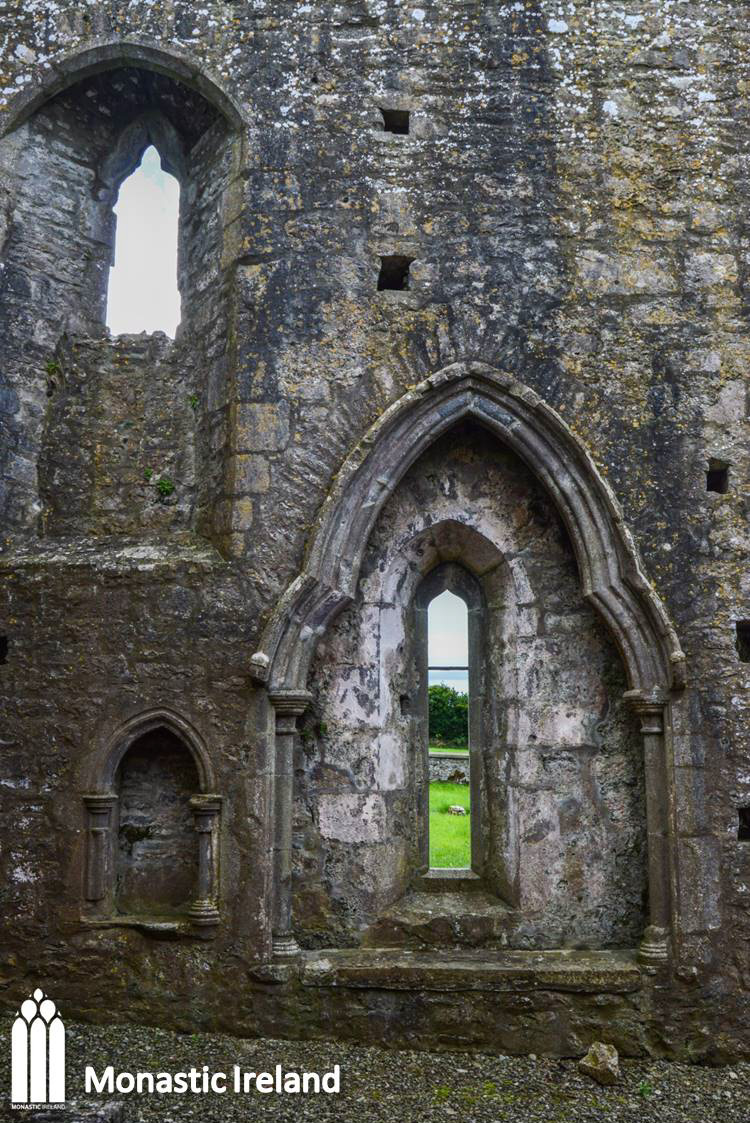 A closer look at the west jamb of the sedilia’s arch, an engaged column with a decorated capital and a base with roll-mouldings. The capital features chevron ornaments, with a dot pierced above each of them. The head at the stop of the hood moulding is very damaged and missing its left side and its nose 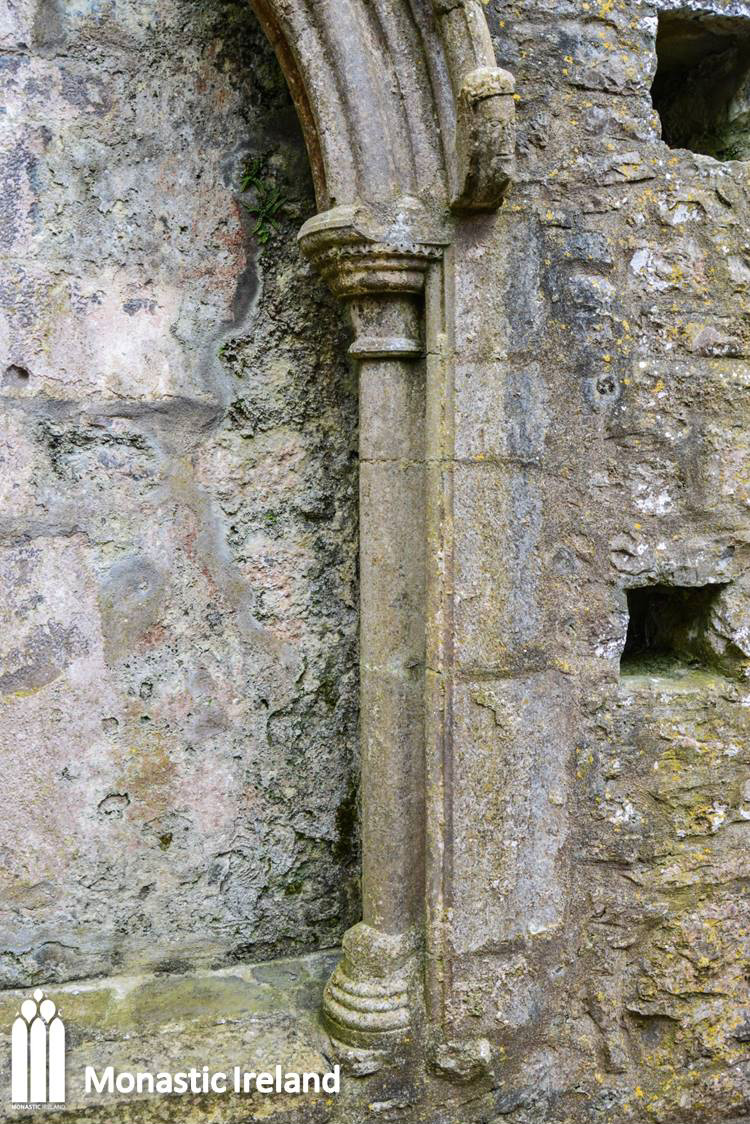 A closer look at the east side of the sedilia arch. Here the column’s capital is decorated only with roll mouldings, while the carved head at the end of the hood moulding is missing its lower half. It is impossible to know who these heads would have represented, although it is possible that they might have been patrons of the friars who helped pay for the construction of the friary. 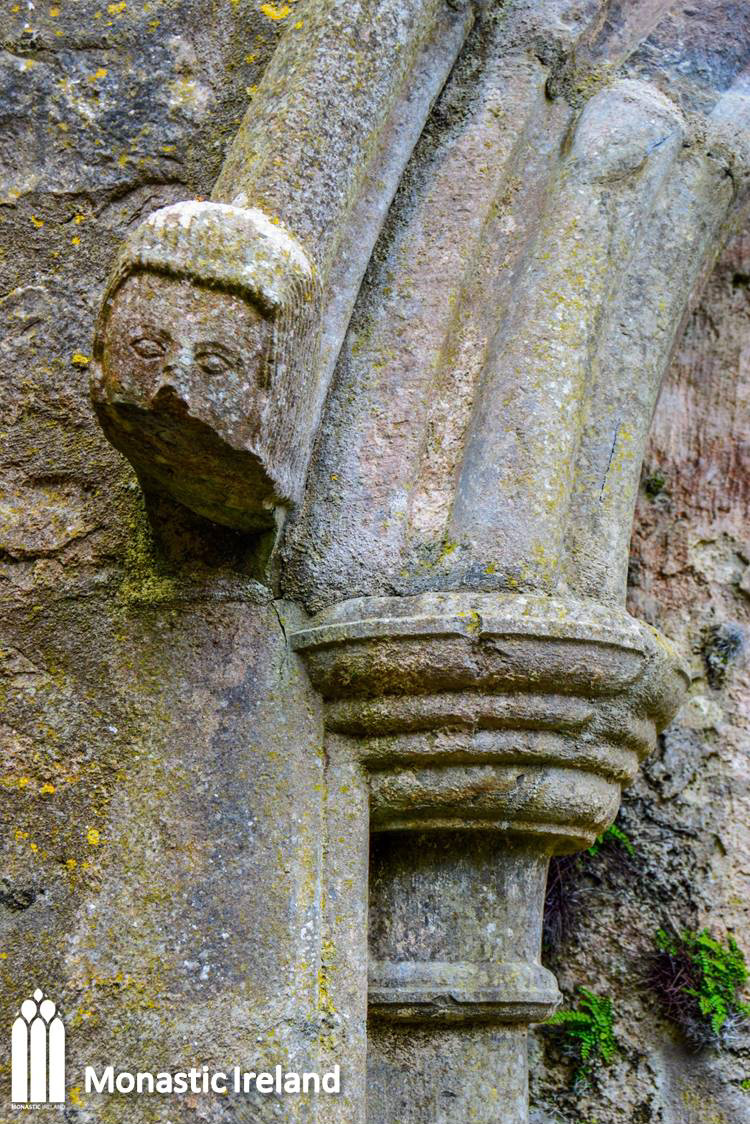 A closer look at the piscina, a stone basin set in a recess, used to wash the sacramental vessels. Here it is framed by a pointed arch resting on two engaged columns with roll-moulded capitals. 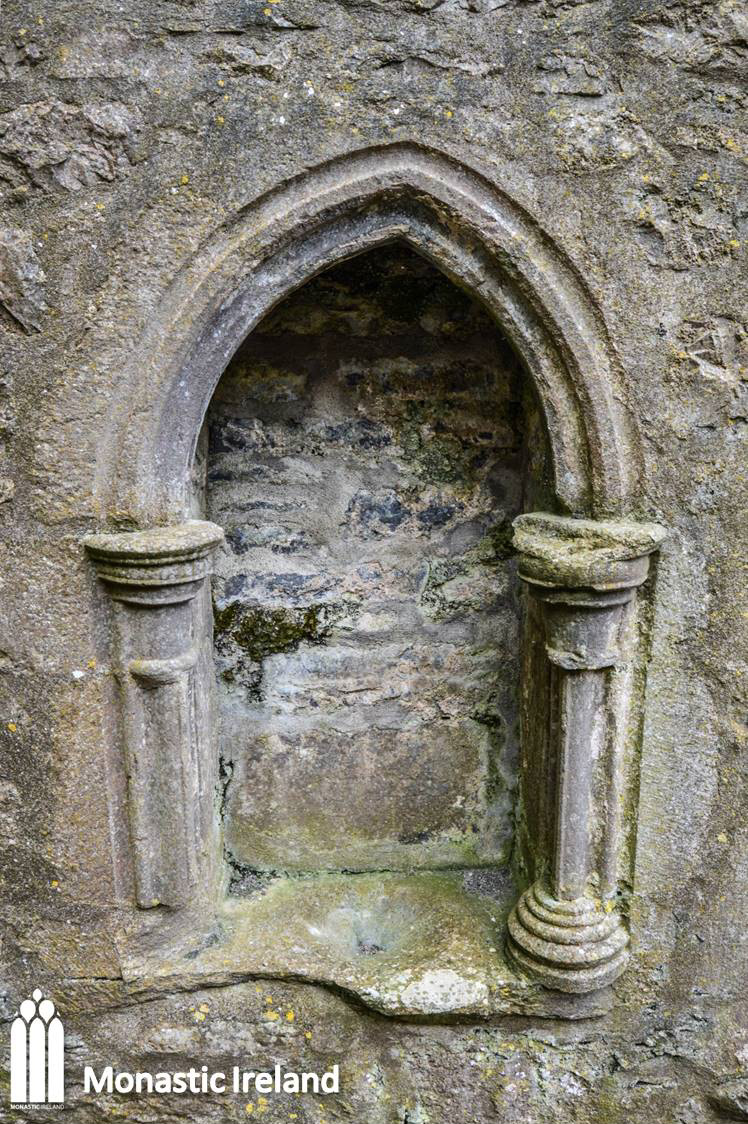 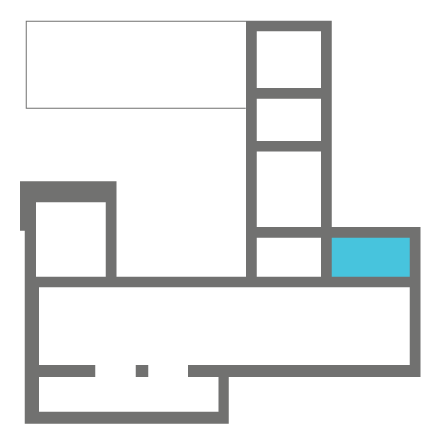 A view of the sacristy, abutting the church choir to the north. 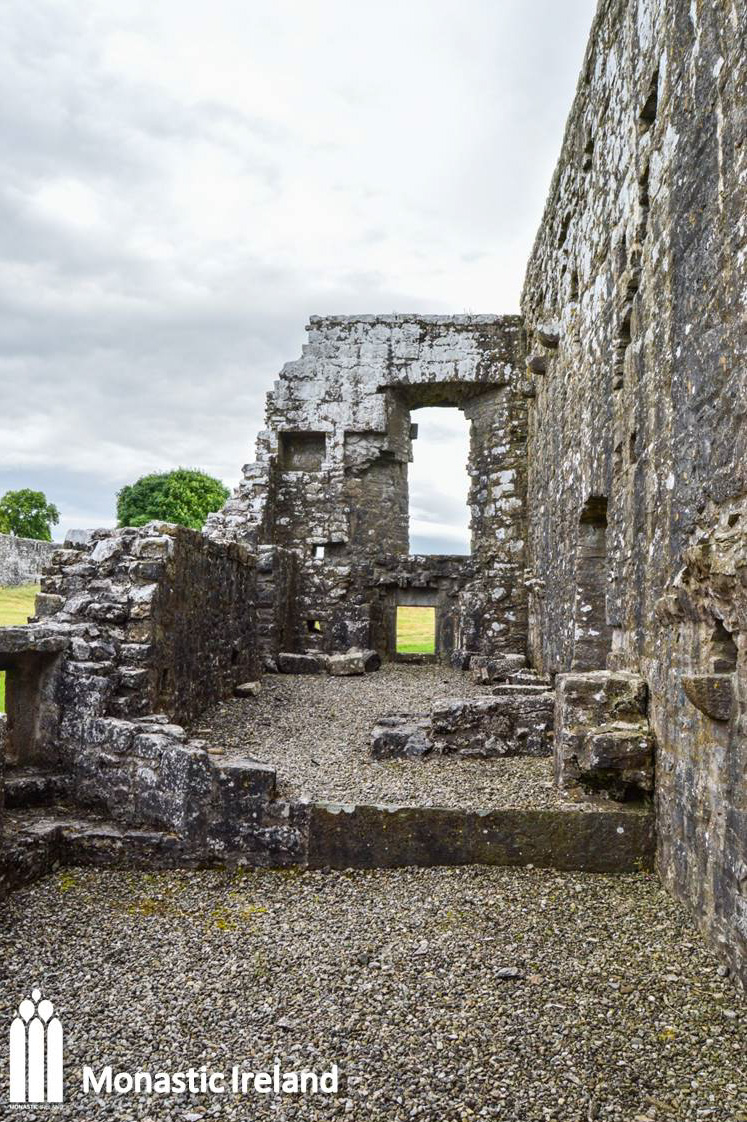 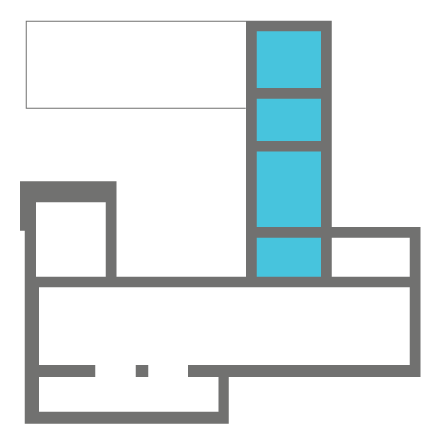 A view of the east elevation of the friary. While Burriscarra was originally founded for the Carmelites in the late thirteenth century, most of the present remains likely date to the first half of the fifteenth-century when the Augustinian friars took over. The east window appear to have been originally quite large, but any tracery that might have existed is gone. The window was at some point filled with a smaller opening, which does not survive intact either. 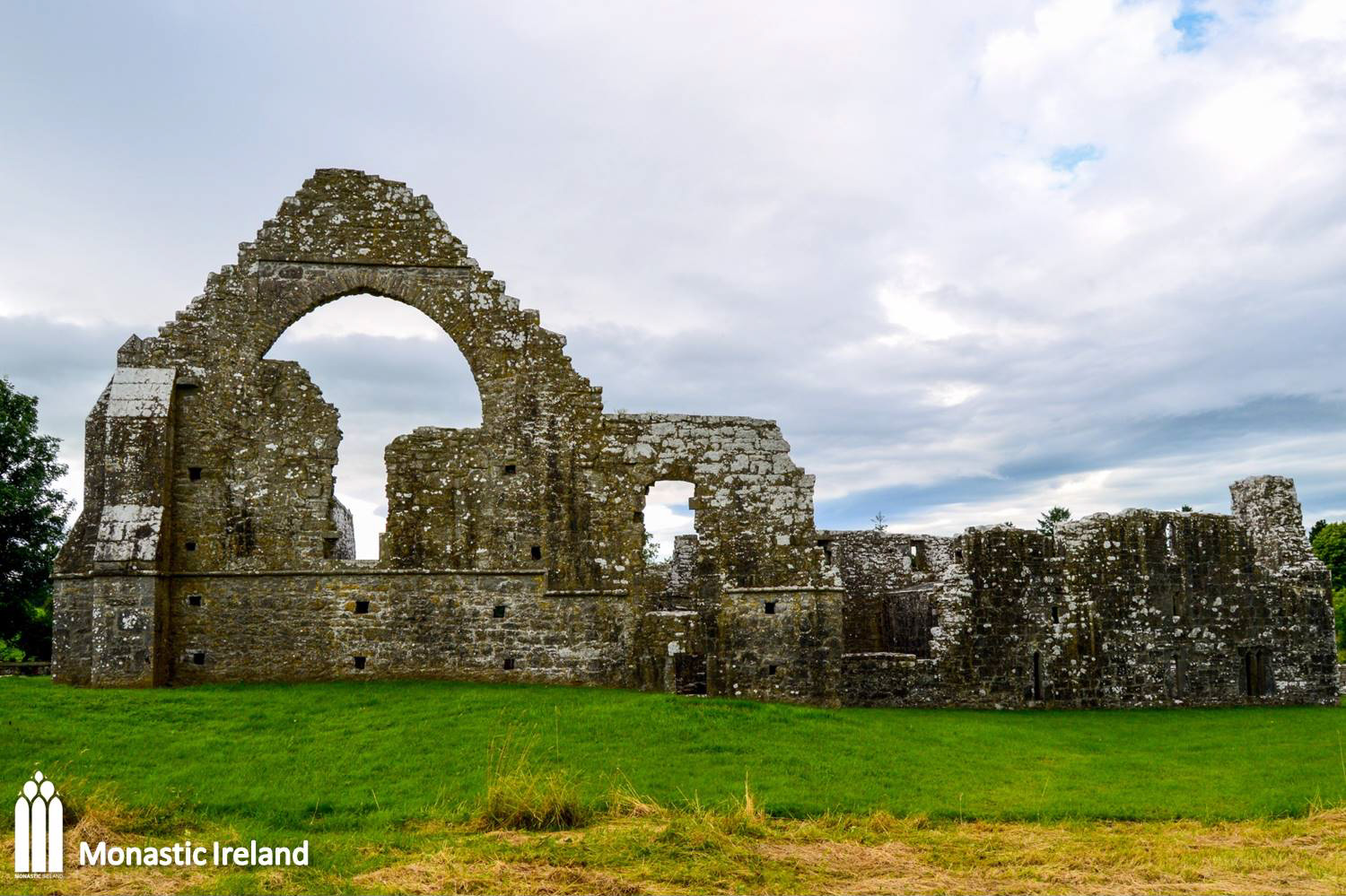 A view into the north-most room of the east range. It is a large room with a fireplace in the north wall. The windows in the ground floor show that it was used for some form of day activity that required enough light. 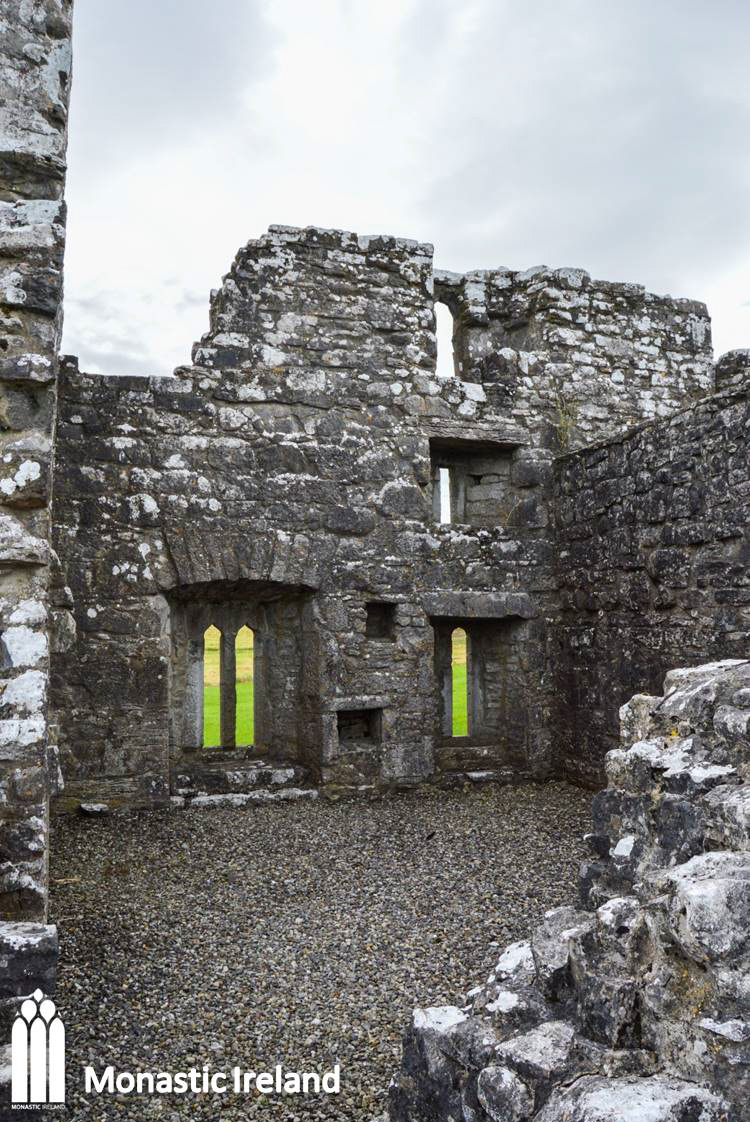 The west elevation of the east range, where a string course runs along the wall, which is associated with the lean-to roof of the cloister arcade. A similar string course is visible on the remains of the east wall of the north range. The east range is comprised of four rooms, in addition to the sacristy directly to the east of it. The third room from the church is vaulted, and is now used to store stones from the ruined buildings. It has a fireplace, as does the room beside it. The east range of a mendicant friary would typically have housed the Chapter room, a day room, and the friars’ dormitory above. 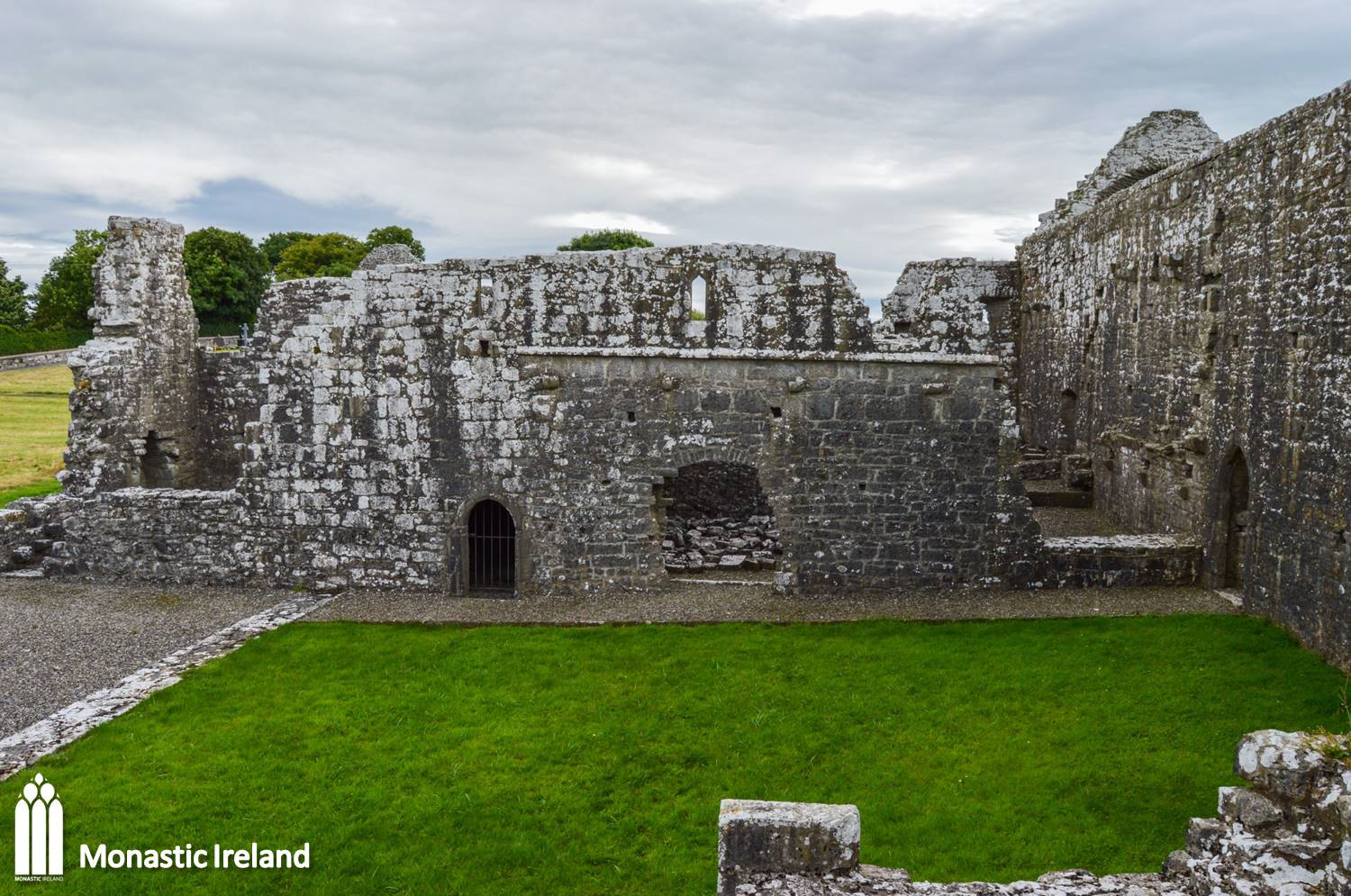 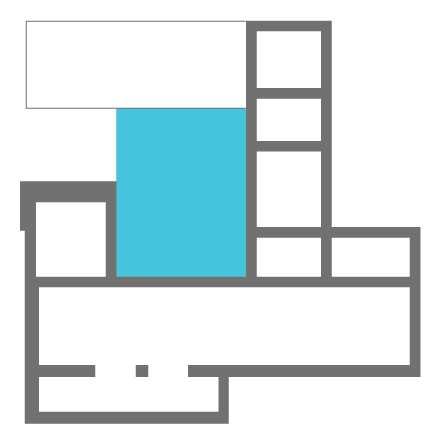 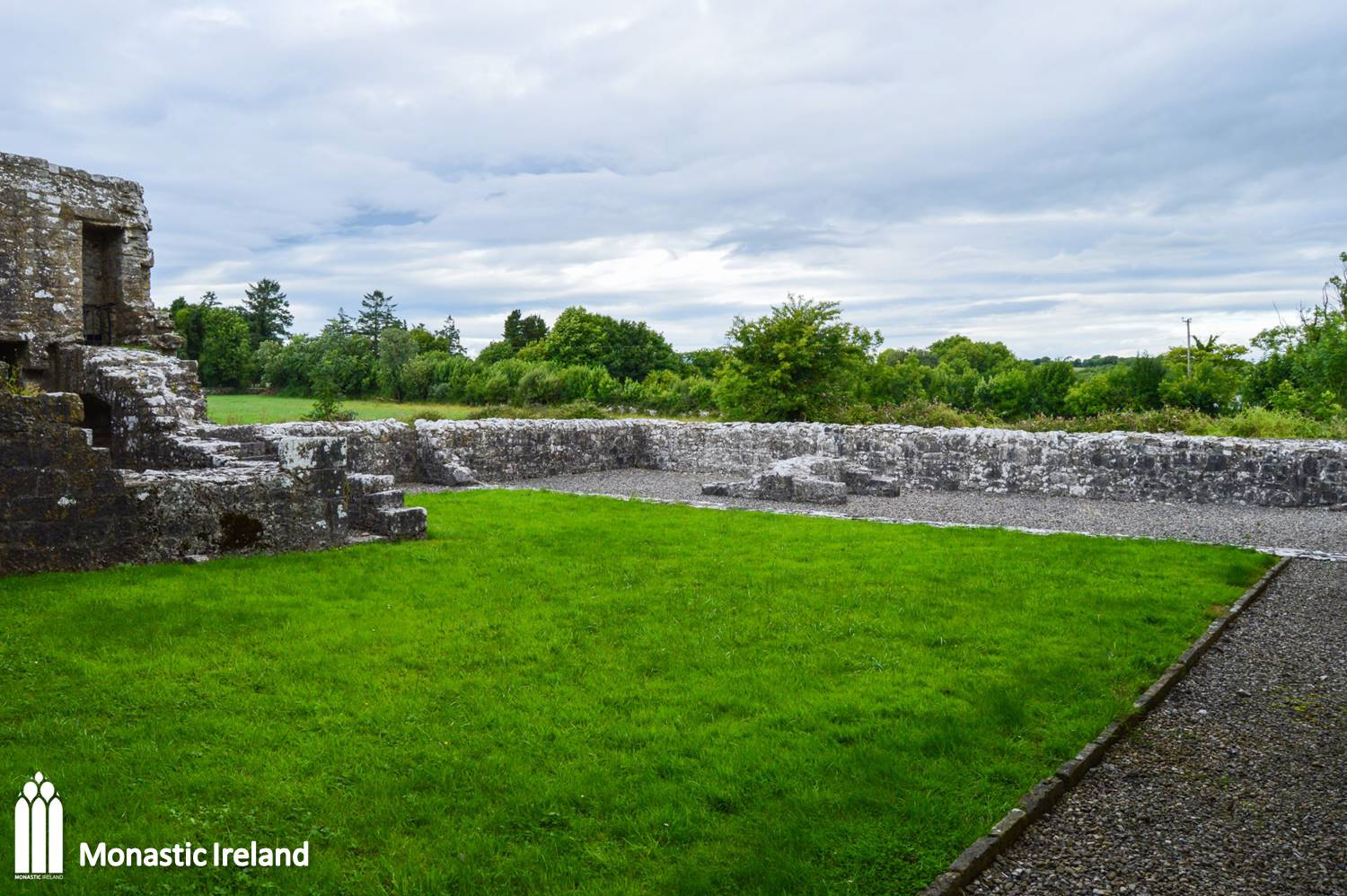 A view of the cloister square and the remains of the three domestic ranges. 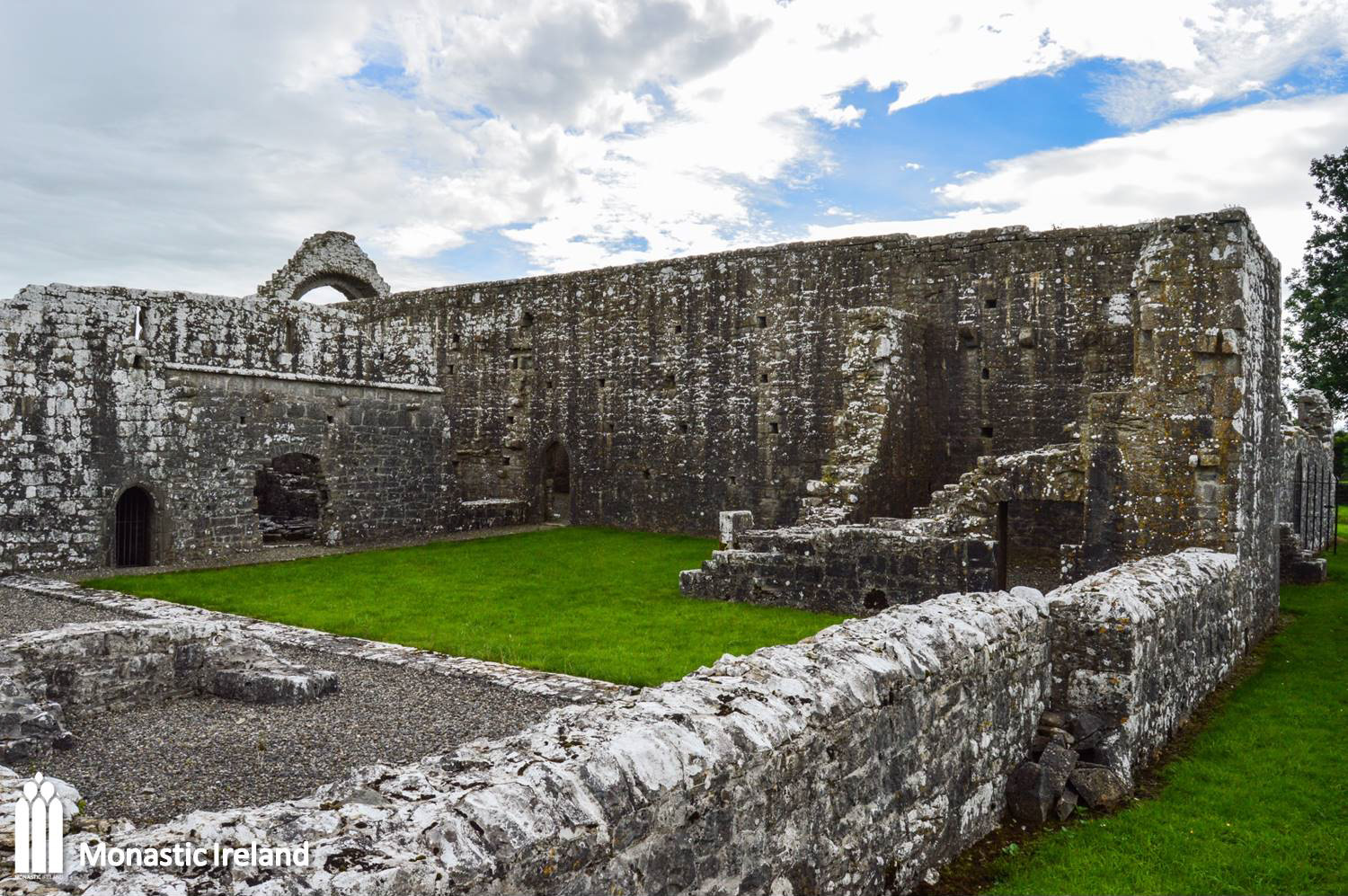 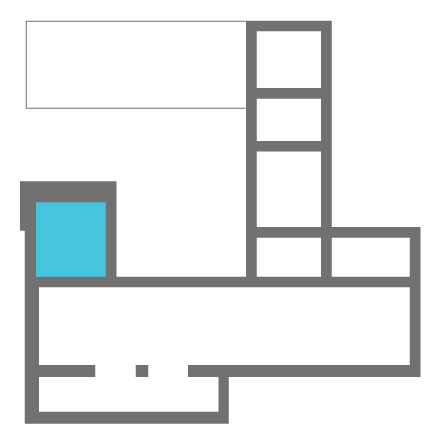 A view of the remains of the west range. It is a short structure that does not seem to have connected with the north range to form a quadrangular set of buildings with the other two ranges and the church. A straight flight of stairs remain that would have led up to the upper floor. 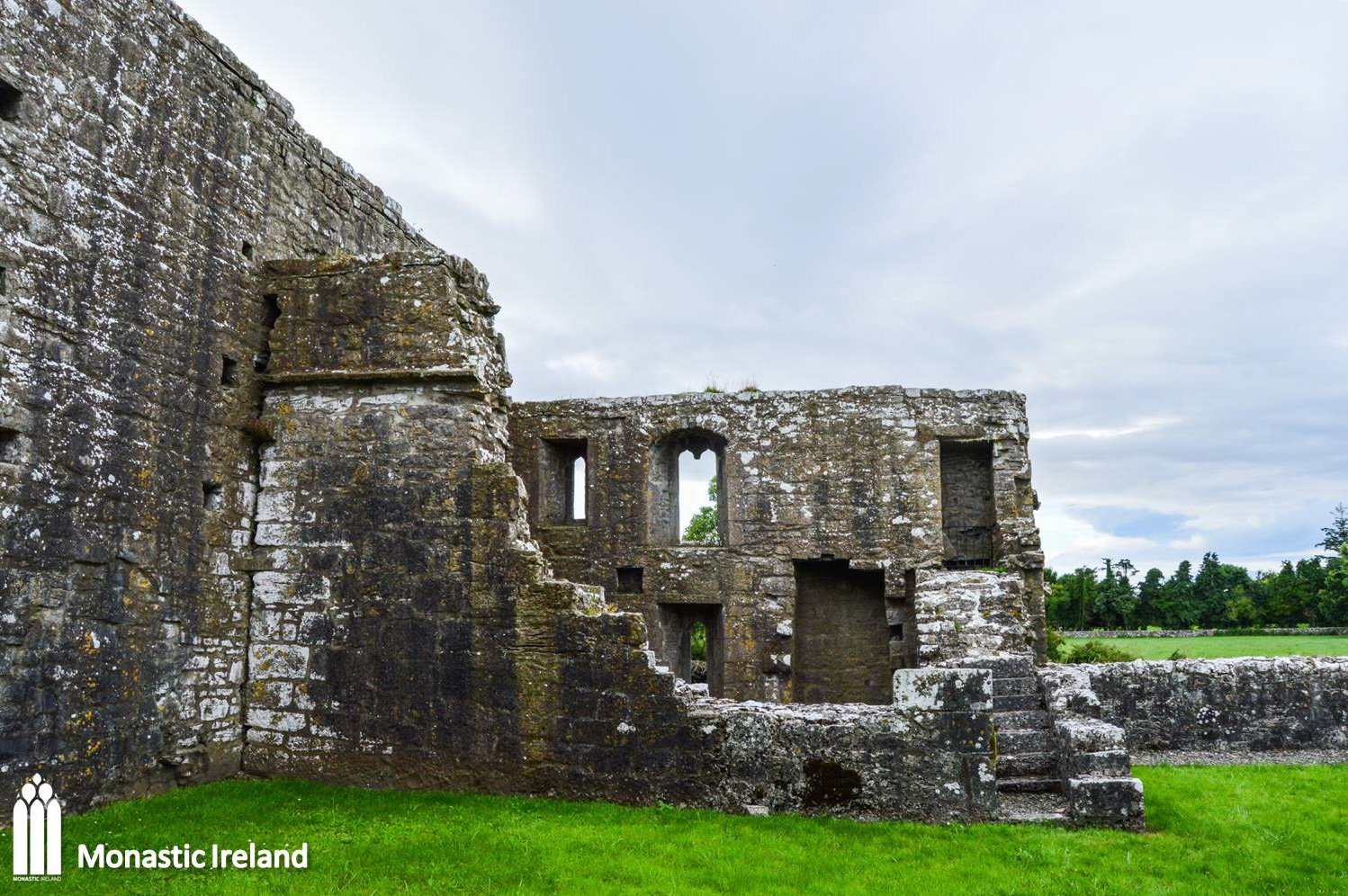 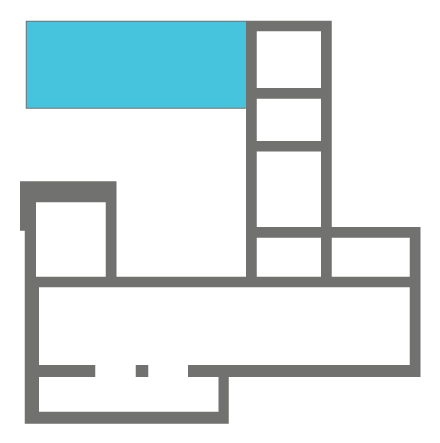 The north range (although usually located to the south of the cloister) of domestic buildings contained the rooms where the religious community dined, including the refectory, kitchen and a warming room known as a calefactory.

Only the outline of the north range remains. The refectory and kitchen of the friars were probably located in this range. 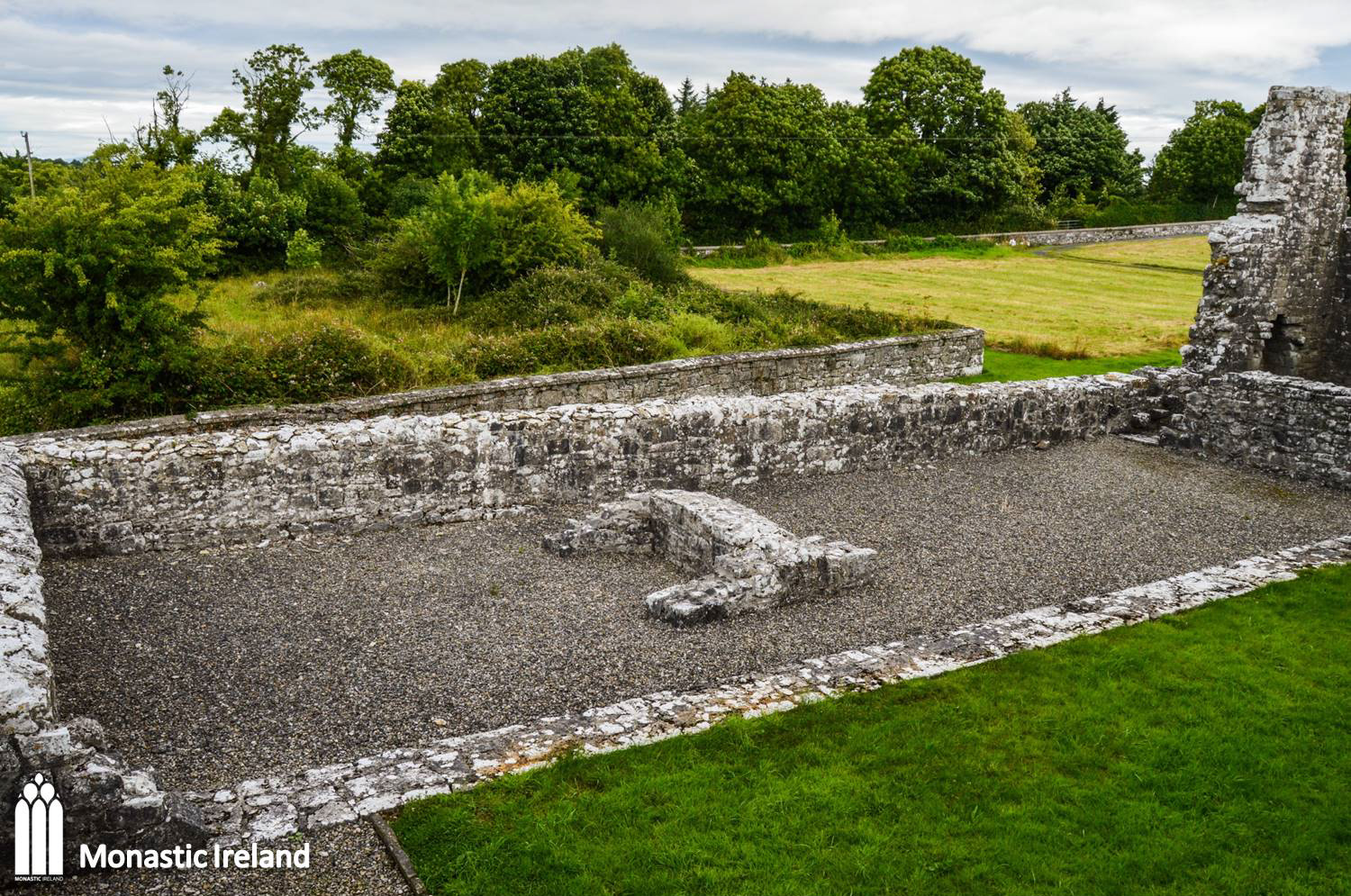 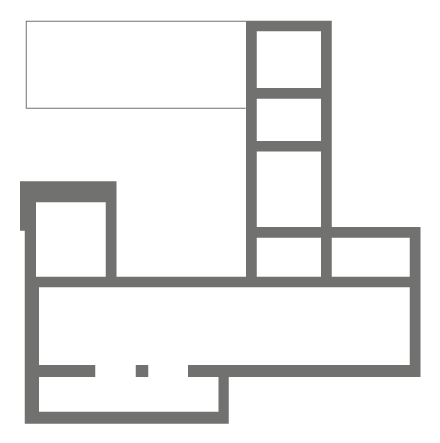 A view of Burriscarra friary, approaching it from the modern cemetery, and showing its picturesque setting away from any nucleated settlement. 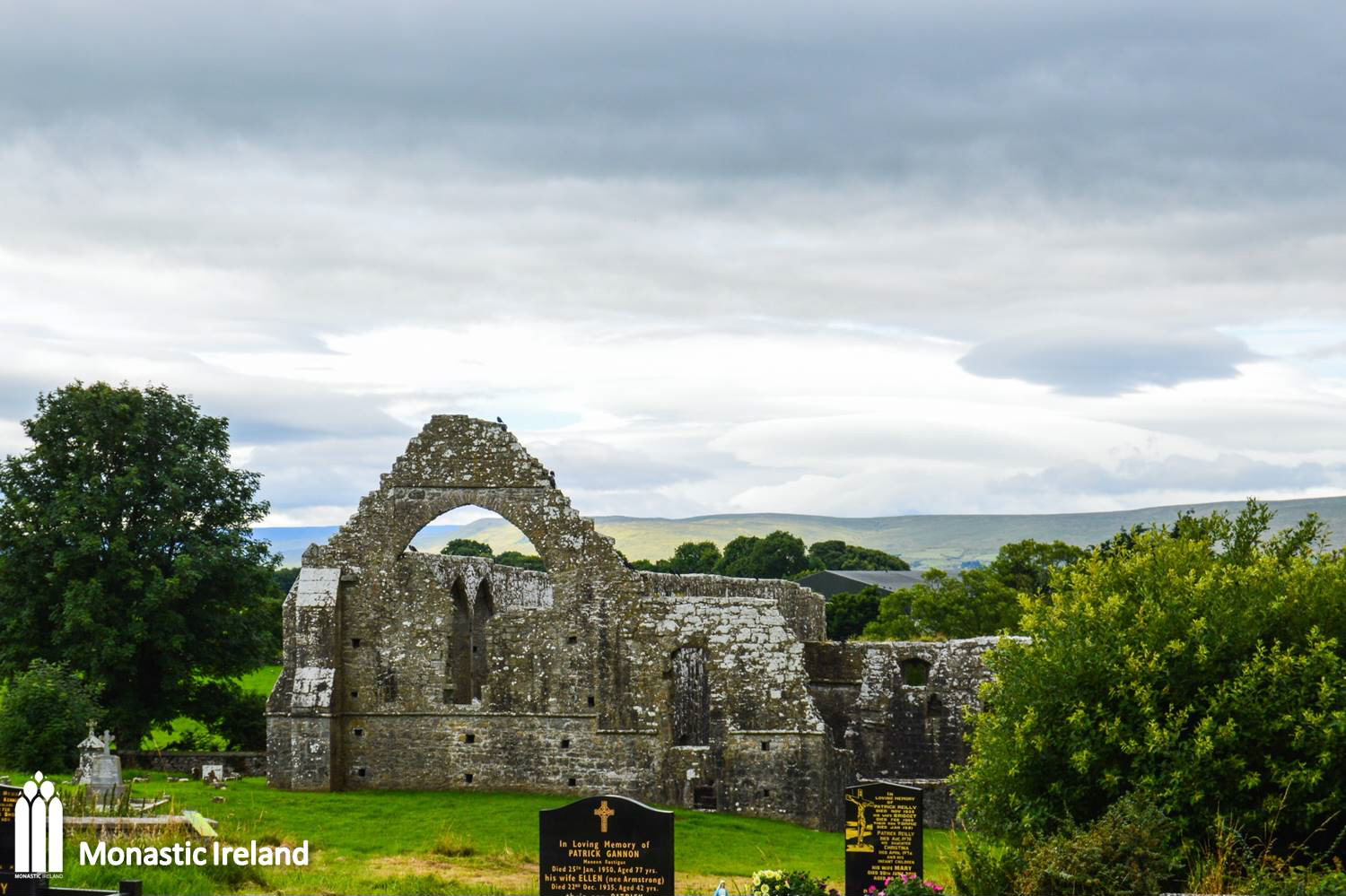