The EU ‘3D-Icons’ project aims to create highly accurate 3D models and a range of other materials (images, texts and videos) of iconic and internationally important monuments and buildings across Europe and to provide access to this data on line.

Over 130 monuments and buildings from Ireland, including decorated high crosses, the passage tombs of Knowth and Newgrange, and the ceremonial landscape of Tara are featured in this digital collection, as is the monastic complex of Glendalough and the island monastery of Skellig Michael. 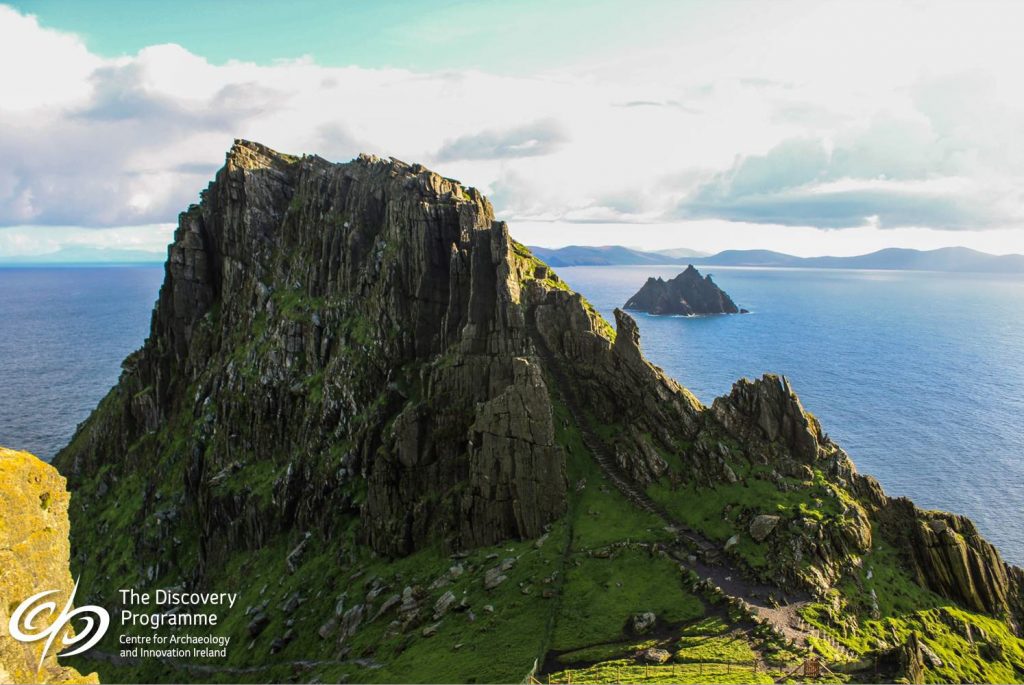 Skellig Michael
by The Discovery Programme
on Sketchfab

Skellig Michael (‘The Rock of St Michael’) located off the south-west coast of Ireland is the most spectacularly situated of all the early medieval island monastic sites, with a well-preserved monastery and remote hermitage. The pinnacle consists of two Old Red Sandstone peaks with a valley between them.The island’s isolation has helped to preserve and protect the monastic remains. There are two main sites on the island: the monastery and the hermitage, with three flights of steps to the monastery. 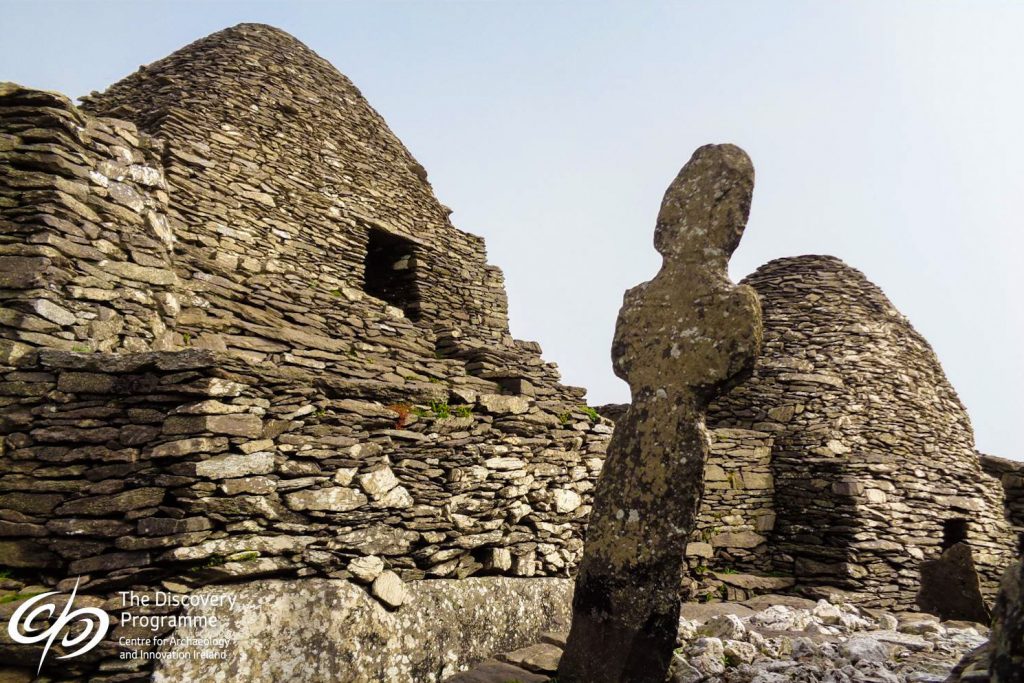 Large Oratory
by The Discovery Programme
on Sketchfab

The large oratory is of the usual inverted-boat shape, with the door in the west wall (Ill. 1.5). It is built of stones of moderate size laid in horizontal courses. Internally it is rectangular (measuring 3.45m by 2.35m) up to a height of 2.3m and then develops into an elongated dome. The internal walls show signs of later limewashing. There is a small rectangular window in the east wall. On either side of the door, which has inclined jambs, the wall is faced inside with two large vertical slabs. The walls of the oratory are about 1.2m thick. Externally, there is a cross of white quartz inserted into the stones of the wall above the doorway, but this is a later addition. 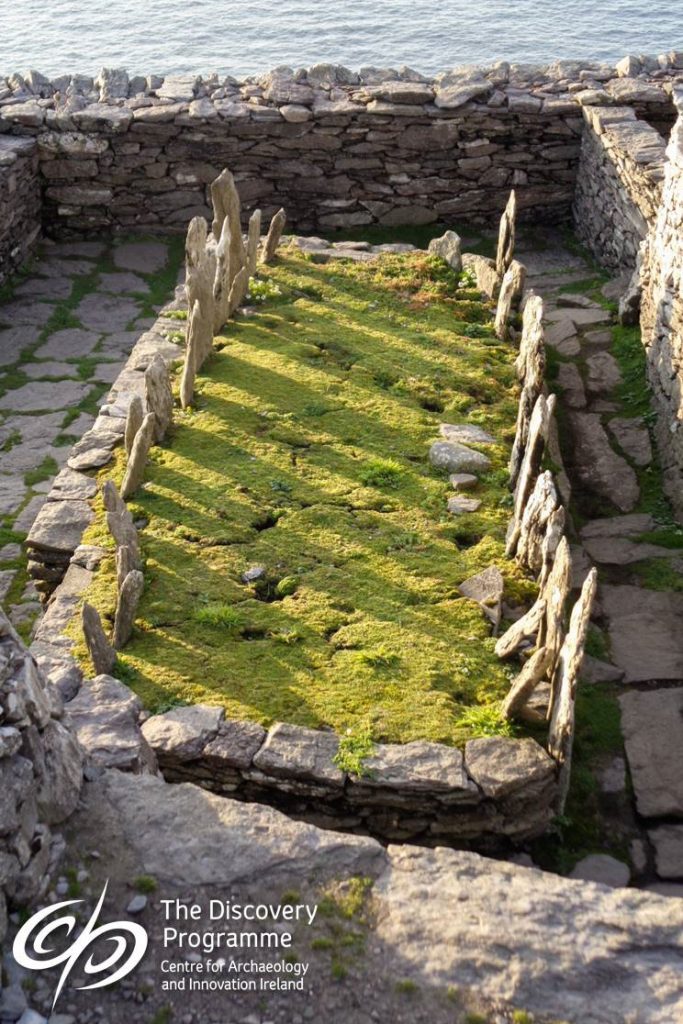 Monks’ Graveyard
by The Discovery Programme
on Sketchfab

The Monks’ Graveyard is located to the east of the large oratory, taking the form of a sub-rectangular platform (constructed in two phases) measuring 7.3m by 3.2m (Ill. 1.5). Its base is defined by large, long orthostats (an upright stone or slab forming part of a structure), against which a row of crosses and cross-slabs are placed vertically on the west side. Originally the graveyard was bigger but the east side fell away when part of the adjacent enclosure retaining wall collapsed. 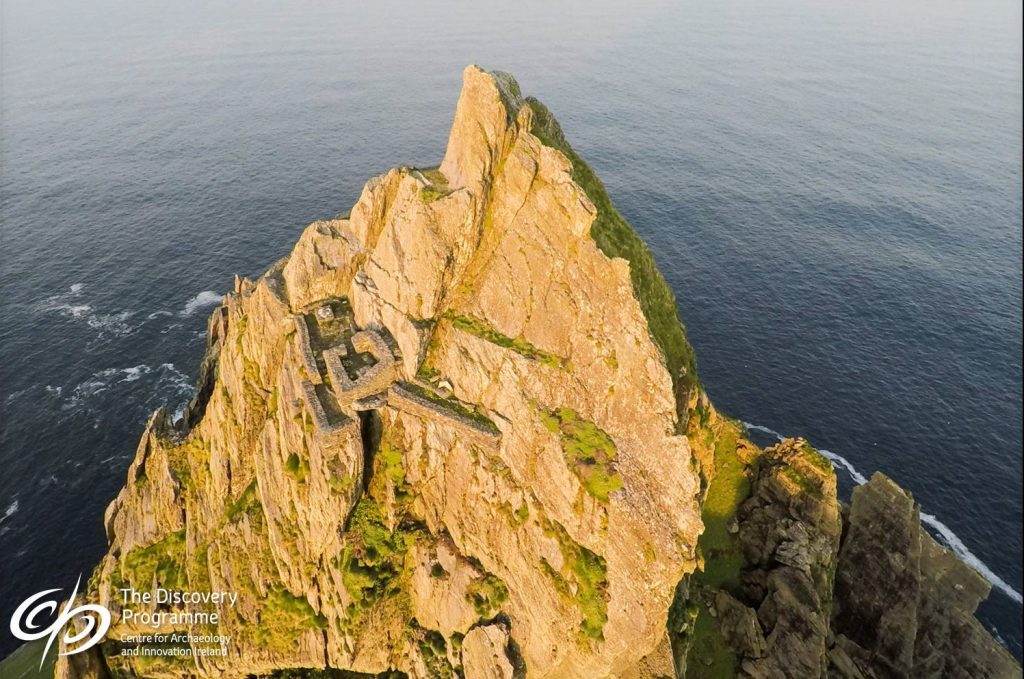 The Hermitage
by The Discovery Programme
on Sketchfab

The Hermitage consists of three separate terraces, labelled Garden/Dwelling Terrace, Oratory Terrace and Outer Terrace. The Garden/Dwelling and Oratory Terraces are located near each other, on the two best natural ledges of the peak. Their spatial proximity is reinforced by the construction of two routes between them, suggesting that they had an important functional relationship. The Outer Terrace, in contrast, is set very much apart from the other terraces and is also the most difficult to reach.

The Garden/Dwelling Terrace – This kidney-shaped terrace is 13m long and varies in width from 2m to 4m. The long axis of the terrace runs roughly from north-west to south-east. The retaining wall, 1.5m high at the north-western end of the platform, is built on firm bedrock and is in impeccable condition. Much of the remaining terrace has collapsed, the current ground level now being below the original level. It is possible that a small dwelling cell may have existed here.

The Oratory Terrace – The second and most important of the three eremitic stations of the South Peak, the Oratory Terrace, lies at right-angles to the Garden/Dwelling Terrace and 4m above it. The main structure is that of a corbelled oratory with a narrow entry midway in the east wall. Internally it is approximately 2.3m x 2m. Against the east wall are the remains of an altar. Two small, interconnected basins are located beside the church. These hold water — a vital resource for a hermit in this inhospitable place. The monks had cut channels into the near vertical, exposed rock faces above this terrace to channel the rainwater down into the basins below. To the east of the Oratory Terrace is a long, narrow,tapering terrace upon which are the possible remains of a shrine.

Access to the Hermitage – The climb to the Hermitage starts at Christ’s Saddle and follows rock-cut steps and handholds to the Lower Traverse, below the Needle’s Eye. The monks cut almost vertical rock-cut steps up through a cleft in the rock and at this point this is known as the Needle’s Eye. Above this is a contemplation or prayer station. A further steep climb leads up to the first of three terraces. At a point halfway up this climb is a separate, more basic route, which leads right up to the summit. The rock-cut steps near the top of this route run under the Upper Traverse, evidence that this was the original route used by the monks to get to the summit prior to the construction of the Hermitage.

The Upper Traverse – This is located above the Oratory Terrace and leads across to the final rock-cut climb to the summit and the Outer Terrace. It was originally paved and had a parapet wall.