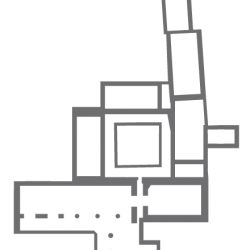 Timoleague Franciscan friary is located in a village on the bank of the River Argideen overlooking Courtmacsherry Bay. It was built on the site of an earlier church dedicated to St Molaga whose feast was celebrated here until the seventeenth century. The foundation of the friary has been attributed to Domhnall Got MacCarthy (d. 1252) in 1240 and also to William de Barry (d. 1373), with his wife Margery de Courcy, in the early fourteenth century. The extensive remains incorporating the church, domestic ranges and a sally port were built in the thirteenth and fourteenth centuries, with additions built in the fifteenth and seventeenth centuries.

Domhnall Got MacCarthy (d. 1252) was the founder of the MacCarthy Reagh dynasty of Carbery in West Cork, and was king of Desmond (Cos Cork and Kerry) from 1247 until the time of his death. He was a younger son of Domnall Mór MacCarthy, king of Desmond (r. 1185-1206). He established a firm power base in the region known as Carbery in southwest Cork, where Timoleague is located.

Despite the extension of the Anglo-Norman lordship in West Cork, Domhnall managed to maintain power and land in the area, and is named as one possible founder of the Franciscan friary in 1240. His grandfather Diarmait had founded the Cistercian abbey of Abbeymahon, originally located at Aghamanister, about two kilometres south of Timoleague. That abbey was moved to its new site before 1278, when Domhnall Got’s son Diarmait was buried there.

The de Barrys, a major Anglo-Norman magnate family of Co Cork, were in possession of Timoleague from 1229. William de Barry (c. 1297-1373) was granted his family’s land of West Cork in the first half of the fourteenth century, and was the founder of the Barry Roe lordship. William and his wife Margery de Courcy (d. 1373) are named as founders and are buried in the friary. Domhnall Got’s great grandson Domhnall Glas (d. 1366), lord of Carbery, who was also buried in the friary may have been another patron. The friary became the burial place of the MacCarthy Reaghs in the late medieval period and probably housed the great Irish manuscript known as the Book of Lismore or the Book of Mac Cárthaigh Riabhach (MacCarthy Reagh) in its library.

Timoleague is worth visiting as one of the few early Franciscan foundations with extensive remains in Ireland. It lies within a very picturesque landscape, beside a small but colourful village of medieval origin and overlooking the river Argideen’s estuary and Courtmacsherry Bay. The buildings themselves present many interesting features and some intriguing quirks, such as the mysterious wall passages and the tall arches on each side of the choir. Also of note is the fifteenth century inserted tower, a typical example of a Franciscan bell-tower. The cellars in the east range are another notable feature: one of them leads down to an outbuilding that would have opened directly onto the river, allowing for ships to deliver fish or other goods to the friary.

c.1240: A foundation was established at the site of Timoleague friary sometime in the thirteenth century, but it is not clear whether it was the Franciscan friary or of another regular or secular community

1331:  Timoleague is listed in the custody of Cork (an administrative division within a province of the Franciscan order)

1366: Domhnall Glas MacCarthy, lord of Carbery and patron, was buried in the friary

1373: William de Barry and his wife Margery, referred to as the first founders of the friary in a documentary source, were buried in the friary

1460: The Observant reform was introduced by de Barrys

1518: John Edmund de Courcy, bishop of Clogher in 1485, and bishop of Ross in 1494, was buried in Timoleague.  He had built the tower, dormitory, infirmary and library there

Post 1540:  The friars remained in the friary after the general suppression of the monasteries

1568:  The friary was confiscated by the crown

1576: Donnchadha MacCarthy Reagh was buried in the friary in the burial-place of his father and grandfather

1590: William Lyon (d.1617), Protestant bishop of Cork removed iron from the friary to build a new mill in the town.  The new mill suffered frequent floods and was severely damaged

1596: Dr. Meredith Hanmer (d.1604), author of the Chronicle of Ireland and warden of the new college at Youghal in 1599, is said to have taken stone and wood from the dormitories to use in his own building projects.  However, according to tradition, the ship carrying the material was sunk during a storm in a sheltered bay

1604:  The friary was repaired by the friars and alterations were made

1612:  An English force was sent to plunder the friary, but it was sent away by a small Irish force under the command of Lieutenant Daniel O’Sullivan

1629: The important Irish manuscript The Book of Lismore (aka The Book of MacCarthy Reagh) was in the custody of the friars where it was consulted by the Franciscan historian from Donegal Mícheál Ó Cléirigh

1631: The friary still existed but had been plundered and the friars imprisoned, while some had been seeking shelter in the locality