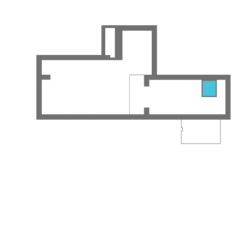 Orders: Franciscan (OFM/ Ordo Fratrum Minorum) from foundation until 1253 Dominican (Order of Preachers, Ordo Praedicatorum) after 1253
Founded shortly before 1253
Founded by Jordan de Exeter, Lord of Athlethan
Also known as the Priory of the Holy Cross

The ruins of the Dominican priory of the Holy Cross lie within the small town of Strade, just a few kilometres south east of Lough Cullin in the centre of County Mayo.  It was founded by Jordan de Exeter, Lord of Athlethan for the Franciscan Order in the thirteenth century, and was the first mendicant house in what was later to become County Mayo.  Its foundation date is unknown but the Franciscan presence at the site could not have lasted long (with the first Franciscan house in Ireland founded in Youghal only in 1224).  In 1253, the site was transferred to the Dominican friars either by the founder Jordan de Exeter, or his son Stephen fitz Jordan de Exeter, allegedly at the request of Stephen’s wife Basilia de Bermingham, daughter of Meiler de Bermingham, patron of the Dominicans of Athenry.

The priory was a daughter house of the Dominican priory in Sligo, according to a sixteenth-century register of Achonry.  Sligo friary was consecrated in 1253, the year that Strade was transferred to the Dominicans.

Like many friaries in the west of Ireland, little documentary evidence survives that details the priory’s patronage networks and key benefactors.  However, the story of the transfer of Strade priory from the Franciscans to the Dominicans by the de Exeters is known due to an entry in the Athenry Register.  The de Exeter family had long been stalwart supporters of the Franciscan order, having founded Strade friary some years previously. However, Stephen’s wife, Basilia, was a de Bermingham, who were great friends of the Dominican order.  Indeed, her father Myler had founded the Dominican house in Athenry c.1241. The story goes that Basilia invited her father to visit her at Strade for a feast.  Once the banquet had begun, Basilia declared that she would neither eat nor drink until her husband granted her a special request.  Eager to avoid embarrassment and appease his wife, Stephen agreed.  Unfortunately for the local Franciscans, she requested that they be expelled from Strade and their friary transferred to the Dominican order.  Her husband agreed, agents were sent to Rome to obtain papal permission for the deal, and the Franciscans left Strade in 1252/3.

Caution is advised however, as the entry about the transfer of the friary as the source was not contemporary, instead dating instead to the fifteenth century.

Like other mendicant foundations throughout Ireland, the friars of Strade were dependent on local patronage to ensure the survival of their convent and recovery after fire.  The tomb niche and altar reredos (ornamental screen covering the wall at the back of an altar) feature depictions of what are believed to be patrons of the priory.  Given that the de Exeter family were clearly important patrons of the friary, it is possible that they might feature on some of these.

Moving on from the medieval history of Strade, the foundation also has significance as the burial place of nineteenth-century Land League campaigner Michael Davitt (d.1906), who was born in the town.  Anne Bald, one of the wives of nineteenth-century map-maker William Bald is also buried in the priory precincts.  In the nineteenth-century, John Dillon (d.1927), Member of Parliament for East Mayo, expressed his gratitude to his cousin Anne Deane by inserting a memorial to her in the medieval tomb niche on the north side of the choir.

Strade priory was a medium-sized foundation and was home to a community of six to nine friars.  While the church survives reasonably well, little survives of the domestic buildings at the site.  The construction at the priory occurred during two main phases.  The earlier phase dates from the thirteenth century when lancet windows (tall narrow windows with a pointed top) were popular.  Much of the nave, chancel, and north aisle of the church date from the thirteenth century.  Further additions were made to the friary in the fifteenth or sixteenth centuries, possibly as a result of a papal indulgence of 1434.  This phase includes the construction of a tower (no longer standing) above the new chancel arch and the replacement of the east window.

The priory features a number of interesting examples of late medieval stone sculpture.  Two examples of particular note are the altar reredos and a canopy tomb.  The altar reredos depicts a Pietà scene of the Virgin Mary holding the crucified Christ on her lap.  To either side are depicted a man and a woman thought to represent patrons of the friary.

The canopy tomb on the north side of the choir is considered one of the finest examples of a type popular in the west of Ireland in the late medieval period.  The tomb frontal features eight figures, most of whom can be identified as specific religious figures on the basis of their attributes.  The first three figures represent the Magi, carrying their gifts of gold, frankincense and myrrh.  Next to them is a figure of Christ displaying the Five Wounds.  This depiction has striking similarities to examples from the Ormond group of carvings which includes examples in Kilkenny, in addition to a depiction in St Nicholas’s Collegiate Church in Galway.  To the right of the pilaster that divides the front of the tomb is a carving of a kneeling man in a habit withdrawing his hood.  He has a weaver’s shuttle hanging from his belt, which may symbolically represent the passing of time or the man’s association with the wool trade.  One of the figures on the altar reredos also has such a device suspended from his belt.  The kneeling figure on the tomb frontal is likely to represent a patron of the friary.  To his right are the figures of a bishop, St Peter and St Paul respectively.

Before 1252: The friary was founded by Jordan de Exeter Lord of Athlethan for the Franciscan Order.

1252: The friary was transferred to the Dominicans, allegedly at the insistence of Basilia de Bermingham, wife of Stephen de Exeter and daughter of Meiler de Bermingham of Athenry.

1254: The friary was badly damaged in a fire, according to the Annals of Loch Cé.

1434: Papal indulgence were granted for repairs to the building by Pope Eugenius IV (d.1447).

1448: Tadhg Óg Ó hUiginn, described as ‘the chief teacher of the poets of Ireland and Scotland’ in the annals,  and keeper of a guest house for scholars and pilgrims, died and was buried in the priory of Strade.

1558: The friary suffered burning, ravages and occupation by ‘heretics’.

1575:  The site of the house of friars of Strade and the two quarters of land (rent 45s.) was granted to James Garvey for 21 years.

1580: At a meeting in Strade Priory in March, Sir Nicholas Malby (d.1584), President of Connacht, agreed to accept Sir Richard ‘an Iarainn’ de Burgh, known as ‘Iron Dick’, as lord of the MacWilliam Íochtair, in return for his loyalty

1588: Strade was leased to Patrick Barnewall for 40 years.

1578: Some of the friary’s lands were leased to Edmond Barrett

1767 : Only four friars were recorded at Strade