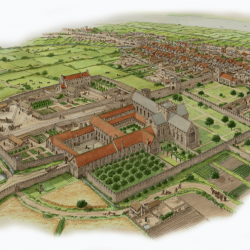 The Augustinian abbey of St Thomas the Martyr lay outside the medieval walls of Dublin in the western suburbs, just off of modern-day Thomas Street. It was founded by William FitzAldelm, custos of Ireland, on behalf of Henry II, king of England, in 1177. The abbey of St Thomas the Martyr followed the Victorine rule, which was also followed in St Augustine’s Abbey in Bristol, England. It is therefore likely that the first canons came over from Bristol. No trace of the abbey remains on the modern landscape.

St Thomas’ Abbey for Monastic Ireland from Noho on Vimeo.

The abbey was dedicated to Thomas Becket, archbishop of Canterbury, who had been murdered in his cathedral by Henry II’s knights in 1170. Becket was canonised in 1173, and the abbey in Dublin was founded shortly afterwards as an act of restitution by the king.

The founder, Henry II, was king of England.  He visited Ireland in 1171, partly to escape the scandal of Thomas Becket’s murder. While he was here he compelled both recent Anglo-Norman conquerors and Irish kings to submit to him, making him overlord of Ireland. He made William FitzAldhelm his steward in Ireland when he left to return to England and it was he who was instrumental in founding the abbey. The abbey of St Thomas the martyr was the only royal foundation in medieval Ireland and its most generous royal benefactor was Henry’s son, the infamous King John. Henry made John lord of Ireland and he visited Ireland twice, therefore he appears to have taken a special interest in his lordship. Even before he became king, John issued a charter granting the abbey all its possessions as free alms. When he became king, he granted the abbey a tithe of the rent of 200 marks that he received from the city of Dublin. John also granted St Thomas’ his tithe of ale that he had by custom of the taverns of Dublin.

Due to the abbey’s association with the Crown, many of the new Anglo-Norman settlers also became its patrons. Some of the abbey’s earliest donors included Hugh de Lacy, lord of Meath, Richard de Clare, lord of Leinster and John de Courcy, who had conquered Ulster. The abbey also became a very popular burial place for some of Ireland’s most important new settlers, including Hugh de Lacy and Basilia de Clare, Richard’s sister.

No trace of the abbey remains above ground, but the probable south wall of the abbey’s church was found by Claire Walsh during an archaeological excavation in 1997 at 2-5 Meath Market, Earl Street South, just off Meath Street. The cemetery of St Catherine’s church, which was adjacent to the abbey, still survives as a public park, maintained by Dublin City Council. Thomas Court, the entrance to the abbey precinct is situated to the west of the cemetery. Hanbury Lane probably marks the northern extent of the abbey precinct, which would have extended down to modern-day Pimlico.

c.1199: John, lord of Ireland, grants the abbey a tolboll (brewing tax) of all the ale and mead brewed in the city.

c.1244: Water is diverted from the Dodder river to the abbey’s watercourse. This sophisticated system will eventually power four mills on the abbey’s lands at Donore.

1289: A fire destroys portions of the abbey buildings.

1306: Richard Sweteman, the abbot of St Thomas’ abbey, is accused of assaulting Alan the Baker on the highway in the city of Dublin.

1326-7: William Stillam drowns in the abbey’s millpond. Thomas de Kent, coroner for Fingal viewed the body, leading to a dispute between the crown and the city over jurisdiction of the abbey, which the city won.

1327: St Catherine’s priory of canons in Leixlip is annexed to St Thomas’ abbey.

1363: On 18 August Thomad de Dale and John de Troye are ordered to investigate an allegation that John Walsh, the abbot, stole jewels and goods belonging to the abbey.

1380: Irishmen are forbidden by statute to become canons of St Thomas’ abbey.

1392: The mayor, bailiffs and citizens of Dublin attack St Thomas’ abbey. The cause for this attack appears to have been a dispute between Richard Tutbery and John Serjaunt as to who should succeed Thomas Scurlag as abbot.

1488: On 21 July, the earl of Kildare, the abbot of St Thomas’ abbey and other nobles are pardoned by Henry VII in the abbey for their part in the coronation of the pretender Lambert Simnel.

1539: St Thomas’ abbey is dissolved during Henry VIII’s Reformation of the Church.

1539: On 31 March, William Brabazon, vice-treasurer, and later justiciar, of Ireland is granted the site of St Thomas’ abbey along with 20 acres of adjacent land.

1552: William Brabazon dies on 7 July at Knockfergus in Co. Louth, while on military expedition against the O’Neills and Scots in Ulster. He may have been moved to St Catherine’s church at some point because a monument is later erected to his memory here.

1610: The church belonging to St Thomas’ abbey must have been gone at this point, because it is not depicted on Speed’s map.

1634: Documentary evidence confirms that the cloister of the abbey no longer exists, though the king’s chamber, frequently used by the justiciar of Ireland is still there.