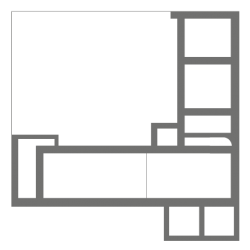 Murrisk friary is located in the rather remote, but very picturesque setting on the southern shore of Clew Bay, Co. Mayo at the foot of Croagh Patrick. The friary was established as an Observant house in 1456, when Hugh O’Malley, a friar from the Observant Augustinian friary in Banada, Co. Sligo, received the papal permission to build a church, cloister and domestic buildings on land granted by Thady O’Malley in Murrisk. The friary was dedicated to St Patrick and served as the starting point of the Croagh Patrick pilgrimage and is thought to have house Patrick’s relics, including one of the saint’s teeth, now in the National Museum of Ireland. Despite the papal permission for the foundation stating that a ‘church, cloister, bell tower, bell, refectory, dorter and other necessary offices’ should be built, the remains only consist of an aisleless church and one domestic range to the east.  The grounds are still used as a cemetery by the local population.

Not much is known about Hugh O’Malley, the friar who prompted the foundation of the friary in Murrisk. He came from the friary in Banada, which was founded in 1423 and shortly thereafter established as a house following the Observant reform of the order. He is likely related to Thady O’Malley, ‘chief of his sept’, who granted the lands in Murrisk to build the friary, which he did ‘for the welfare of his soul and the souls of his progenitors’. The O’Malleys (Uí Mháille), Lords of Umaill, were one of the few seafaring families on the west coast and controlled most of what is now the barony of Murrisk. Thady was likely Tadhg mac Diarmaid Ó Máille (d. 1467), who ruled Umaill at the time. The O’Malley’s nominal overlords were the Mac William Burkes (Oughter), who were also important benefactors of the mendicant orders, establishing the Dominican friary in Burrishoole and the Franciscan friary in Moyne.

Interestingly, in the papal permission the reason given for the foundation of the friary is the fact that the local population has ‘not hitherto been instructed in the faith’.  However, this is difficult to believe in late medieval Ireland, especially given Murrisk’s proximity to the Croagh Patrick pilgrimage. It is believed that following the construction of the friary, the relics of St Patrick were kept in the church, which became the starting point of the Croagh Patrick pilgrimage.  It is possible that these reliquaries included the shrine of St Patrick’s tooth (Fiacail Phadraig), now in the National Museum of Ireland, and the St Patrick’s Black Bell, which has been acquired by the Royal Irish Academy.

Despite the official suppression of the friary in 1578, the friars were able to stay, probably due to the remoteness of the site and the ongoing patronage and protection of powerful patrons. Testaments to this ongoing patronage are two chalices that were made for the friars in the seventeenth century. The Viscount Mayo Chalice of 1635 was commissioned by Maeve/Maud O’Conor in honour of her late husband Theobald Burke (d. 1629), 1st Viscount Mayo, son of the famous pirate queen of Connacht, Grace O’Malley (d. 1603). He usually fought on the side of the English against the other branches of Burke in Mayo, for which he was rewarded with a knighthood in 1603-04, later created Viscount Mayo in 1627. His wife, Maud, was the daughter of Charles O’Conor of Sligo. The chalice bears the following inscription:

(Pray for the souls of Theobald, Lord Viscount Mayo and his wife, Maeve ni Cnochoure(Maud O’Conor)  who had me made for the monastery of Murrisk in the year of our Lord 1635.)

A plate was later inserted under the foot alluding to the use of the chalice by Philip Staunton, last prior of Murrisk friary.  The inscription read:

‘This Chalice was used by the Very Rev. Philip Staunton Prior of Murrisk Abbey who after the dispersion of the Augustinian Fathers from Murrisk resided with his niece Mrs. James MacCormack (nee Sarah Staunton) at Creevagh, Ballintubber, Co. Mayo. After the Prior’s death in 1797 it was lent to Rev. Richd. Burke, P.P., and it subsequently passed to Tower Hill House. In 1880 Major M. C. J. Blake (Tower Hill) Presented it to the Right Rev. T. J. MacCormack Bishop of Achonry the Grandson of Sarah Staunton.’

The Murrisk Chalice of 1648 was made in Galway by Richard Joyce, which was commissioned by John de Burgo (Burke), an Augustinian friar.  The chalice was recorded in the Augustinian church on Thomas St., Dublin in 1928.

The inscription is as follows:

(Father Brother John de Burgo, an Augustinian, caused me to be made for the Convent of Murrisk, in the year 1648.)

The Westport Chalice of 1724 was made for the Augustinian community of Murrisk by Peter Brown.  The chalice was bought c.1874 by George Browne, (d.1896), 3rd Marquess of Sligo, from a Dublin dealer, who told the Marquess that the Peter Brown was an ancestor of his who died in 1724.  Although made by a Catholic for use by the Murrisk friars, the marquess donated the chalice to the Protestant church at Westport for use as a communion cup.  Its inscription read:

(Pray for the soul of ‘Dominus’ Peter Brown who caused me to be made for the Convent of Murisk, in the year of the Lord 1724.)

A visit to Murrisk friary is an unmissable stop during a trip around Clew Bay and the famous pilgrimage site of Croagh Patrick.  Indeed, visitors can enjoy the full experience of what the pilgrimage might have been like in the late Middle Ages by visiting the friary prior to climbing the mountain. The remains consist of the church and one domestic range extending to the north. Any other buildings, if they existed, have disappeared. A string course running along the walls of the east range and the church indicate that a cloister walk with a lean-to roof was at least intended to be built. A rib-vaulted bell-tower was also built at the west end of the nave, though it had fallen down by the end of the eighteenth century. Nonetheless, a number of architectural features are still worth noting, chief among them the beautiful east window, a group of five trefoil-pointed lights with intersecting bar tracery, typical of fifteenth-century mendicant architecture in Ireland and which architectural historian Harold Leask once called the ‘best of its type’ in the west of Ireland. Another striking feature in the church is the embattlement over the south wall, such as is normally associated with castles and tower houses. Finally, two examples of face carvings can be seen in the south wall and the east wall of the church, which are likely to have represented benefactors of the friars who helped with the construction of the friary.

1456: A papal permission was given to Friar Hugh O’Malley to establish an Augustinian friary on land given by Thady (Tadhg) O’Malley

1457: Hugh O’Malley was in Rome to discuss some affairs of the order with the Prior General, and was appointed vicar of a chapter to take place in Ireland

1578: The friary and its property was granted for 21 years to James Garvey, brother of John Garvey, Protestant Archbishop of Armagh

1605: An inquisition found that the friary had been seized of a quarter of land

1617: Christopher Garvey, son of James, received a grant in fee of the castle and lands of Murrisk

1635: Maeve O’Connor commissioned a chalice to be made in honour of her late husband Theobald Burke, 1st Viscount Mayo, for the Murrisk friary

1648: A chalice was commissioned by Friar John de Burgo for the friary, and made in Galway by Richard Joyce

1649: Jerome Gibbon was named prior of Murrisk friary and again in 1673

1656: Christopher Garvey, great-grandson of James, was allotted 500 acres by the Cromwellian Commissioners

1724: The Westport Chalice was made for the Murrisk community by Peter Brown

1785: John Gibbon was appointed prior of Murrisk friary, assisted by Miles Prendergast

19th Century:  The Garvey family was still in possession of Murrisk friary

1940: Thorough repairs were carried out to Murrisk friary, with less extensive works undertaken a number of years prior