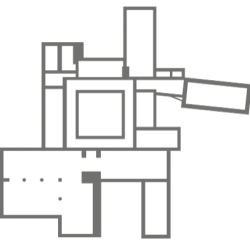 Moyne Franciscan friary is located to the south of Killala bay, two miles to the southeast of the village of Killala. It is among the most extensive and impressive remains of Franciscan friaries in Ireland, and is often compared to Ross Errilly friary in Co. Galway. Moyne was the earlier foundation, having been established before 1455; it shares with Ross Errilly its position in a very rural landscape, though Moyne was built by the shores of the North Atlantic Ocean. Moyne was founded as an Observant friary, but it remained under the authority of the Conventual Minister Provincial of the order until 1460, when Pope Pius II (d.1464) authorised Irish friaries to follow the Observant reform under the authority of their own elected vicar provincial. The main benefactors of both friaries shared familial ties, but had become bitter rivals by the time of the foundations: Moyne was probably founded under the patronage of the MacWilliam Burkes, lords of Lower Connacht, while the Clanricarde Burkes supported the friars in Ross Errilly, and held territories in south Connacht. The two friaries share material characteristics, in their layout and a number of architectural features, which suggests that this rivalry might have translated into architectural emulation.

As is often the case there are no contemporary records of when the foundation took place, or of who was involved, though it is believed that Moyne is one of the friaries established following the permission from Pope Nicholas V (d. 1455) in 1450, to establish Observant houses in the dioceses of Killala, Achonry and Elphin.

The principal benefactors of the friary were the Mac William Burkes, lords of Lower Connacht (Co. Mayo – also called Mac William Oughter), and Tomás Óg (d. 1460) has been suggested as the founder.  Following the Burke Civil War in the 1330s, the Lordship of Connacht was split between two rival factions of the Burke family – the MacWilliam Burkes in North Connacht and the Clanricarde Burkes in South Connacht, patrons of Ross Errilly friary. The two families fought for domination of the province for much of the fifteenth and sixteenth century. Tomás Óg’s brother Richard (d.1473), who became lord of Lower Connacht at his death, established the Dominican friary of Burrishoole c. 1469.

Like Ross Errilly, the friars were able to stay in Moyne after the Dissolution, under the protection of the Mac William Burkes, though they also suffered during violent English attacks, which included murder. In 1579, Fr John O’Dowd was tortured to death after he refused to reveal a plot against the Queen that he had heard in confession from a local man.   In 1582, Br Felim O’Hara, an old and respected laybrother, was killed by English soldiers in front of the high altar, having stayed behind during at attack on the friary in order to try to protect the friars’ property. When Donatus Mooney visited the friary in 1616, six friars lived there, though the friary belonged at this point to an English widow, who lived there too and rented the church and a few cells to the friars.

By 1771 only two friars were reported to be living in the whole diocese, and by the middle of the nineteenth century, the friars of Moyne were reduced to a couple of lines of satirical poetry in Aengus O’Daly’s Tribes of Ireland: the satire (1852):

‘The friars of Moyne are generous with wormwood,

And with everything that they do not need themselves;

The remains of Moyne friary are extensive and impressive, and are amongst the best-preserved in Ireland.  This allows visitors to really get a sense of what life in a late-medieval friary might have been like. Its layout is similar to that of Ross Errilly friary, though the buildings to the north of the cloister that might have formed an outer court (as is the case in Ross Errilly) were taken down in the eighteenth century to build the now abandoned house that is located off the east range. The church was enlarged by the addition of a large aisle which is wider than the nave itself, following the construction of a transept to the south, an arrangement indicative of the pastoral and spiritual role of the friars in the area, despite the rurality of the location. At least two chapels were arranged in recesses underneath the east windows of the transept. Between them is an interesting feature, a very small room recessed within the thickness of the wall, which might have served as an additional vestry where the sacramental vessels and vestments serving the altars of these chapels were kept.

Other interesting features include window tracery – the only form of decoration present in the church – the central tower, which was enlarged at some point to accommodate a newel stair, the cloister arcade, with dumb-bell piers almost identical to those in Ross Errilly, and the west doorway, in the classical style of the seventeenth century.

An interesting collection of ship etchings can be seen on the walls of the church, dating probably to the end of the sixteenth century, which remind us of the connections Galway merchants had with the friary as its benefactors. Thanks to its location by on the shores of Killala bay, Ross Errilly was probably involved in the local trade, with ships able to come as far as their harbour to deliver and collect goods.

(Video courtesy of The Discovery Programme: Centre for Archaeology and Innovation Ireland)

1450: In April, Pope Nicholas V gave permission for the foundation of Observant friaries in the dioceses of Killala, Achonry or Elphin

1460: In August, Pope Pius II granted permission to Irish Observant friars to have their own vicar provincial, Malachy O’Clubhain (whom they had already elected)

1468: John, a merchant, son of Henry Blake of Galway, left 40 pence to the friars of Moyne in his will

1496: John, a merchant, son of John Lynch, left a bequest to Moyne in his will, among other religious institutions

1574: In a report on Connacht, the friaries of Moyne and Rosserk are listed as being still in possession of rebels or friars

1579: After having arrested a number of friars and local men, English soldiers hung a man they accused of plotting against the Queen.  They also tortured Fr John O’Dowd – a Moyne friar – to death, while attempting to make him reveal the plot he had heard in confession from the recently hanged man

1582: Br Felim O’Hara, an old laybrother, volunteered to stay behind to protect the friars’ property as the English were approaching, and was killed by them in front of the high altar

1590: Sir Richard Bingham, chief commissioner of Connacht and Thomond, commanded forces against the MacWilliam Burkes and burned the friaries of Moyne, Rosserk and Rathfran

1595: The friary and its land were granted by Queen Elizabeth to Edward Barrett, and the friary was described as ruined

1616: In June, Donatus Mooney visited the friary, which he found in possession of an English widow – likely the wife of Edward Barrett, who rented the church and a few cells to six friars, who had helped repaired the church with help from local people

1640: Fr Brian O’Higgins OFM asked the community in Moyne to say 700 masses for him, in exchange for book to the value of the masses (£50), but died in Madrid. The money passed to Fr Philp Nolan, who gave £20 of it to Fr Columb, a laybrother from Moyne who happened to be in Madrid. The full sum was later paid over to the friars

1670:  Richard Albonagh donated a chalice to the Franciscan community at Moyne.  This is the only chalice associated with Moyne friary that has survived (although in record only). The inscription read:

1771: A report on the see of Killlala compiled that year mentions that only two Franciscan friars in remain in the diocese

1793: It was observed that some buildings of the north side were taken down 40 to 50 years prior to use materials for a dwelling house on the site of the old walls and joined the great church