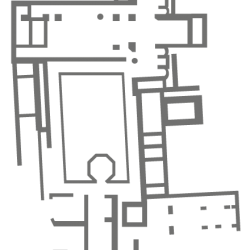 Mellifont abbey was the first Cistercian foundation in Ireland and became one of the wealthiest religious foundations in Ireland. The abbey is located in the valley of the Mattock, a tributary of the river Boyne, one of Ireland’s important waterways which was controlled at various points by Mellifont. This foundation was among the wealthiest in medieval Ireland, holding extensive lands, and although its surviving remains – with the exception of the lavabo – do not reflect the grandeur of its architecture, all the essential components of a Cistercian abbey are evident, including a cruciform church, chapter house and cloister. After it suppression under Henry VIII, the monastery was converted into one of the largest mansions in the country during the second half of the sixteenth century, which lead to the almost total destruction of the church. The most visible remains are standing due to their re-use as a porch (the octagonal lavabo) and chapel (the original chapter house) at this time.

The foundation of Mellifont in 1142 was initiated by St Malachy (d.1148), archbishop of Armagh who spearheaded the reform of the Irish church in the mid twelfth century. While travelling to Rome, Malachy became acquainted with St Bernard when he stayed in Clairvaux, and had sent a number of Irish novices to be trained under St Bernard’s direction. Donnchad Ua Cerbaill, king of Airgialla (parts of modern counties Armagh, Monaghan, Cavan, Louth and Meath) was Malachy’s secular patron who granted the archbishop the site and lands for the new foundation. Donnchad died in Mellifont in 1168. Gilla Críst (Christianus) Ó Connairche (d. 1186) was appointed as the first abbot but relinquished the office to become bishop of Lismore and papal legate. The solemn consecration of the new church was celebrated in 1157 and was attended by many dignitaries including Muirchertach Mac Lochlainn, high-king of Ireland who donated 160 cows and 60 ounces of gold and grant of lands near Drogheda.

From its foundation Mellifont had to deal with turmoil in its community. The monks who had come from Clairvaux in the twelfth century, including Robert the architect, quarreled with their Irish counterparts, who continued their own customs in the new foundations, forcing the French monks to leave. The thirteenth-century ‘Conspiracy of Mellifont’ began with resistance to the decrees of the General Chapter of the Cistercian Order.  Monks from English communities were sent to restore order in the Irish abbeys, but this strategy was unsuccessful until Stephen of Lexington, abbot of Stanley (and later abbot of Clairvaux) visited Ireland in 1228. He forced the resignation of the abbot of Mellifont and reduced Irish influence considerably at Mellifont, thanks to the support of Henry III (d.1272) and local Anglo-Norman lords. While Irish monks returned to the abbey following Stephen’s visitation, Mellifont became an exclusive English (or Anglo-Norman) community and, as such, became a royal monastery.Why visit?

The building of Mellifont abbey was a key event in the history of Cistercian architecture in Ireland and elsewhere as its original church was built in the 1150s under the guidance of a monk, sent from France, named Robert. English and French influences are noticeable in the art and architectural features. The lavabo – the location where the community washed their hands before entering the church – and the chapter house are the most complex buildings to survive. Probably constructed in the early thirteenth century, it is octagonal, rests on an elegant plinth and its sides are pierced by an arch with three orders. Excavations uncovered a considerable collection of medieval carved and moulded stones, patterned   tiles, fragments of painted glass windows, roof tiles, pottery and coins, many of which are now exhibited in the visitor centre.

1157: The solemn consecration of Mellifont by Gelasius, archbishop of Armagh, and further significant endowments from Irish kings including Muirchertach Ua Lochlainn, high-king of Ireland

1168: Donnchad Ua Cerbaill (Donough O’Carroll), who had attended the consecration of the church in Mellifont in 1157, was murdered and buried in the abbey

1170: It was recorded that over 300 lay brothers at Mellifont

1192: Abbot Maol Iosa was suspended and admonished for refusing to receive a visitor from Clairvaux

1194: The Pope granted permission for the translation of relics of St Malachy from Clairvaux to Mellifont

1216: Abbot Gregory died in exile in France, having been expelled from Mellifont, allegedly through the jealousy and envy of the other monks

1228: Stephen of Lexington made a visitation of Mellifont, expelled its abbot and replaced him with the Norman, Jocelyn, prior of Beaubec

1268: The monks were granted papal permission to celebrate St Malachy’s feast day ‘with three candles and a sermon’

1272: Robert Bruce made a pilgrimage to the shrine of St Malachy in Clairvaux. It is unknown if his brother Edward Bruce either visited or raided Mellifont during his Irish campaign in 1315-6

1343: The abbot became embroiled in a dispute with the Crown about obstacles to access for the King’s boats on the Boyne caused by Mellifont’s weirs. The abbot won his case but this dispute arose again on a number of occasions during the fourteenth century

1380:  English control had been established and a law ensuring that ‘no mere Irishman’ should be professed at Mellifont was enforced

1378:  John Terrour, abbot of Mellifont was indicted for the murder of the monk John White nine years prior

1458-71:  Abbot John Waring nearly brought Mellifont to ruin by leasing out its many properties too cheaply

1488: Abbot Thomas Hervey received a royal pardon for his support of the Lambert Simnel rebellion, an failed attempt by Yorkists in 1487 to place the 10 year old Simnel on the throne of England.

23 July 1539: Abbot Richard Contoure surrendered the abbey to the Lord Chancellor and the buildings were leased to Lawrence Townley

1566: Lease agreement drawn up with Edward Moore to convert Mellifont into a mansion, necessary for the defense of people in the area and that it should also be used to provide hospitality of ‘her Majesty’s subjects’.

1603: Hugh O’Neill, Earl of Tyrone submitted to the Crown at Mellifont

1661: Henry Moore (d.1676) became 1st earl of Drogheda and took up residence in the abbey.  Henry Street and Moore Street in Dublin were named after him

1727: Mellifont was sold to the Balfour family of Townley Hall

Early 19th Century:  Several ‘humble cottages, inhabited by still humbler inmates’ were located among the ruins of the abbey

1938: The monks of Mount Melleray Cistercian Abbey, Co. Waterford founded a new Mellifont abbey on lands which had been part of the property of the original Mellifont abbey four hundred years before.

3D Model of Mellifont Abbey by omnidirectional on Sketchfab