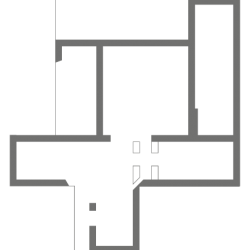 The friary is located near the village of Ballylongfort, Co. Kerry at the mouth of the river Ballyline, on the Shannon estuary, in the diocese of Ardfert. The friary was an Observant foundation established by John O’Connor, lord of Kerry who begun its construction in 1470. The friary was licensed by Pope Sixtus IV in 1477. The place name Lislaughtin suggests that an earlier church existed before the friary that took its name from the seventh-century saint, Laichtín. It is located in O’Connor’s territory only 2km away from Carrigafoyle castle, a stronghold of the O’Connor Kerry.

John O’Connor (d. 1485), lord of Kerry founded a friary which became his own burial place and that of the O’Connors. He endowed the friary with altar vessels and other furnishings. The friary was licensed in 1477 by a Franciscan pope, Sixtus IV, who had instructed the prior of Ballinskellings, the archdeacon of Aghadoe and the dean of Ardfert to grant the license if the site was suitable. Following the resignation as lord of Kerry in favour of his son, John and possibly his wife, Margaret Nagle, retired to the friary as members of the Franciscan Third Order. John’s son, Cornelius and his wife, Avelina Fitzgerald donated a beautiful processional cross to the friary in 1479. The silver gilt cross bears the figure of Christ and the symbols of the Evangelist set at the ends of the cross arms. The figures on the collar below the crucifixion represent Franciscan friars or St Francis. The cross is a testimony to intermarriage practices between powerful families of both Irish and Anglo-Norman descent.  The cross, now in the National Museum, was discovered in 1871 by a farmer ploughing the land at Ballymacasy, south of Lislaughtin townland.

The proximity of the friary to the castle presents an interesting phenomenon encountered in Ireland from the times of early mendicant foundations. The friary’s remains consist of the church with a south transept, the cloister and domestic buildings located to the north. One of the two carved tomb niches on the north side of the nave was possibly made for the burial of John O’Connor, the friary’s founder. In the chancel on the south side there are sedilia or the seats for clergy. The friary had a library and a scriptorium on the top storey which was accessed from the friars’ dormitory. The dormitory cubicles have a recess under each window, possibly a storage area for friars’ personal items, such as books or writing utensils. The friary’s garderobe or latrine block is a two-storey structure.

1470: The friary was founded by John O’Connor, lord of Kerry

1477: The friary was licenced by Sixtus IV, a Franciscan pope

1479: Cornelius O’Connor, son of John and his wife Avelina Fitzgerald donated a processional cross to the friary

1485: An unnamed O’Connor Kerry and his wife died, more than likely they were John O’Connor and Margaret Nagle

1507: A Franciscan provincial chapter was held in Lislaughtin

1580: Three friars, Daniel Hanrichan, Maurice O’Scanlan and Philip O’Shee were beaten to death in front of the high altar and the friary’s buildings were destroyed. The cross donated by Cornelius O’Connor and Avelina Fitzgerald was possibly hidden for safekeeping

1617-18: Friar Donatus Mooney describes the friary as being ‘solitary and surrounded by woods’ which suggests it was then unoccupied. The friary was granted to James Scolls and then to Sir Edward Denny

1792: A typical slender Franciscan tower is still seen on the sketch of the friary dated to around that year, but the tower since collapsed

1871: The processional cross, made in 1479, was found in the field in the nearby town of Ballylongford