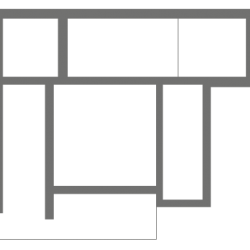 Killone is a National Monument situated in a secluded and picturesque valley on the shore of Killone Lake, near Ennis Co. Clare. The nunnery was founded by Donal Mór O’Brien in about 1189, at the same time as Clare Abbey of the Augustinian canons, on lands belonging to the male house. Killone abbey was dedicated to St John the Baptist.  It was suppressed in 1584 and was recorded as being in ruins by 1617.  To the northeast of the nunnery at the edge of the lake lies St John’s (the Baptist) well, which is a holy well and altar.

Killone nunnery first appears in the Annals of Inishfallen when the death of its abbess  Slaney, O’Bryan’s daughter, was recorded in 1259. Slaney, it is believed was the sister of Donnchadh O’Brien, king of Thomond (d. 1242), who had founded the nearby Ennis Franciscan Friary.

The death of another abbess, Dubhchollaithigh O’Brien, was recorded in 1350 in some fragmentary annals from the west of Ireland. The nunnery is also possibly mentioned in 1302 in Papal taxation records when it was valued at 2 marks (although it may be confused with another religious house).  It was recorded as being dissolved in 1543 and again in 1584, which suggests the earlier attempted closure had been unsuccessful.

One abbess of note was Renalda O’Brien, unique among Gaelic Irish women in that her last will and testament of 1510 has survived in the Ormond Deeds. She requested that she be buried with her ancestors at Ennis Friary rather than at Killone.

The last recorded abbess was Lady Honora O’Brien.  In her youth, she had followed the religious life at Killone, only to elope with Sir Roger O’Shaughnessy, with whom she had children before the Pope gave dispensation for their marriage. At the Dissolution, Killone abbey was granted to Murrough O’Brien, 1st Earl of Thomond (d.1551), father of Honora.

Killone nunnery is one in a number of fascinating monastic sites in and around the town of Ennis, in Co. Clare, together with Ennis and Quin Franciscan friaries and Clare Abbey, especially as it is one of only three existing cloistered nunneries in Ireland. The buildings are set around an almost square cloister, with the church forming the northern side of the nunnery. Remains of the east, south and west ranges are visible, though the east range is the most substantial of the three, thanks to heavy conservation work. The church has a very ornate east window in Late Romanesque style incorporating an intramural (within the building walls) stair to the church’s parapet. At the external south-eastern corner of the church is a decorative stone quoin (the external angle of a wall) in the shape of a woman’s head and arms, which appears to support the church.

St John’s well, a holy well and altar to the northeast of the nunnery, lies on the edge of Killene (or Killone) Lough. An inscription records that the altar was last repaired by an Ennis merchant, Anthony Roche, in 1731. The altar is topped with several ‘cursing stones’ used for keeping count of the pilgrims’ rounds at the well. The rounds are associated with a Pilgrim’s Road connecting the site to Ennis town, although the nunnery itself does not form part of the well rounds. The well is still frequented.

Folklore has recorded so-called ‘corpse lights’ in the ruins of Killone, as well as at many other graveyards in Co. Clare. Killene Lough is also associated with the tale of a mermaid captured by one of the O’ Briens. He took her home, where she remained until it is said a fool tried to make her speak by throwing boiling water at her. Running back to the lake, she vowed:

“As the return of the salmon from the stream,

A return without blood or flesh,

May such be the departure of the O’Briens,

Soon after this curse, the O’ Briens vanished from Killone, never to possess it again.