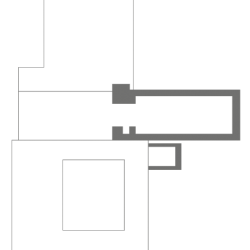 Kilkenny City, arguably the capital of Medieval Ireland, was the caput of one of the most famous personalities of the western medieval world, William Marshall, 1st earl of Pembroke (d.1219).  Widely known as the quintessential medieval knight, William Marshall was also an administrator, magnate and builder of towns and churches, founding the Augustinian priory at Kells and the Cistercian abbey at Tintern.  It was likely his son, Richard Marshal, 3rd earl of Pembroke (d.1234) who like founded Kilkenny Franciscan friary, sometime between 1232 and 1240. His brother William, 2nd earl of Pembroke had founded the Dominican priory in 1225, and it is there that Richard was buried in 1234. The first documented reference to the Franciscan friary occurred in 1245, when the Friars received a royal grant. The most famous reference appears in the annals of Friar Clyn, a member of the Franciscan community in Kilkenny in the fourteenth century.  Of the original foundation, only the thirteenth-century choir, the fourteenth-century tower and the restored sacristy remain. Excavations in the 1960s and 1980s have revealed the existence of a north aisle and a large chapel arm (or so-called transept), as well as the foundations of the cloister and of domestic buildings. The remains of the church now lie within the ground of the former Smithwicks’ brewery.

Richard Marshal (d. 1234), the likely founder, became earl of Pembroke after the death of his brother William Marshal the younger in 1231. The Marshals were among the most powerful magnates of the Irish Lordship. William was Lord of Leinster and became Justiciar of Ireland in 1224. He built castles in Carlow and Ferns and granted a charter to the city of Kilkenny, where he also founded a Dominican priory in 1225, possibly in the name of the king.

Richard was his heir in Ireland, but his career did not go as smoothly as that of his brother. In 1223, Richard rebelled against King Henry III (d.1272) after he discovered a plot to kill him, supposedly engineered by the king’s advisers. Proclaimed a traitor, he fled to Wales to regroup.  He gathered a small following and came back in February 1234 to try and recapture his lands, which had been ravaged at the behest of Henry III. He was defeated and wounded at a battle in Kildare on 1st April, later dying in Kilkenny on the 16 April after botched surgery on his wounds.

Another well-known individual associated with the Franciscan friary was Friar John Clyn (d.1349), a member of its community.  Friar Clyn’s noteworthy reputation rested on his account of the Black Death in Ireland, which feature in his annals.  Written from 1333 up to his death from the plague in 1349, the Annals of Friar Clynn run from the birth of Christ to 1349, featuring the famous quote,

“I am leaving parchment for the work to continue if, by chance … anyone of the race of Adam should be able to escape this plague …”

His annals are an important primary source that provides a window on fourteenth-century Ireland.  They are an eyewitness account of the political and social conflict between the Irish and Anglo-Irish, knighthood in Ireland and, of course, the Black Death, a pandemic that caused the deaths of millions of Europeans during the mid-fourteenth century.  Carried by rodents infested with plague-carrying fleas, the disease spread rapidly throughout Europe along trade routes and through urban centres, including Dublin, Drogheda, Waterford and New Ross.  Unfortunately for Friar Clynn, he was to succumb to the plague in 1349 during an outbreak in Kilkenny that saw resulted in the deaths of nearly half the inhabitants of the city.

However, thanks to Friar Clyn’s eyewitness account, we also know that the church choir of the Franciscan friary was completed in 1321, that a new high altar was consecrated in 1323 and a new cemetery was in 1331, and that a confraternity was established in 1347 in order to fund the construction of the tower.

While the remains of the friary are modest, they are well worth visiting as part of a tour of Kilkenny’s rich medieval heritage, which include the St Canice’s Cathedral, the Dominican priory, Kilkenny castle, and Rothe House, the home of the sixteenth-century merchant, landownder and Mayor of Kilkenny, John Rothe fitz Piers. Despite only the choir and the crossing tower of the friary still standing today, there are a number of very interesting features to be admired within the ruinous walls. The beautiful fourteenth-century east window, a group seven graded lancets separated by slim mullions, takes up almost the entire breadth of the east gable.  The fourteenth-century tower was begun just before the Black Death decimated Kilkenny but completed years later.  The corbels supporting the arches of the rib vault are carved into eight figures that probably represent the benefactors who funded its construction, the sadness of their faces expressing their pain at horror of the devastation caused by the plague: they are literally carrying the weight of the tragedy on their shoulders.

1231-34: The friary is established, likely under the patronage of Richard Marshal, 3rd earl of Pembroke

1245: The community receives its first royal grant, followed in 1246 by another, for the specific purpose of the friary construction

1321: The choir is completed in 1321, the east gable and window funded by Dame Isabella Palmer

1323: A marble high altar is built and consecrated

1331: A new cemetery is consecrated within the precinct of the friary

1337: A great flood, ‘the like of which had not been seen in forty year’, covers the entire church, except the high altar

1347: Dame Isabella Palmer, who paid for the construction of the choir’s east gable, is buried within the church

1348: The Black Death reaches the port cities of Dublin and Drogheda by July, likely on trading vessels from the continent.  It reaches Kilkenny by Christmas day, taking a great toll on the inhabitants of the city between December and March, including eight members of the Dominican priory in Kilkenny who all died from the disease in one day.

1349: Friar Clynn, who chronicled the history of the friary, including the horrors of the Black Death, dies of the plague himself

1351: The Kilkenny Corporation grants a perpetual endowment to the friars for the celebration of masses

1479: Sir James Butler grants the friars land at Donore and Troystown, with among its purposes, ‘the maintenance of the study of sacred theology therein’

1543: Three years after its dissolution, the friary is granted to Walter Archer, sovereign of the city and the Corporation of Kilkenny

1533: The Franciscan friars return during the reign of Queen Mary but were again expelled in 1559 when she was succeeded by Elizabeth I

1603: The people of Kilkenny appealed to Walter Archer to use the church for worship. The city authorities voiced their request to Lord Mountjoy, the lord deputy, who refused

1627: A philosophical stadium is established in the friary

1647: The friary is given the double status of philosophical and theological stadium at the provincial chapter of the order, the only house of the kind in the province

1678: The community consisted of eleven friars

1698: The Franciscan friary is assigned for the building of a military barracks

1854: The Smithwick’s brewery expanded to include the buildings of the Franciscan friary within the brewery grounds

1880s: The friary is sold to Mr. William Morrissey, a hardware merchant

1889: The remains of the friary become a national monument, and the Board of Works begins renovations

2013: The Smithwick’s brewery closed in December, with brewing moving to the Guinness Brewery at St James’ Gate, Dublin