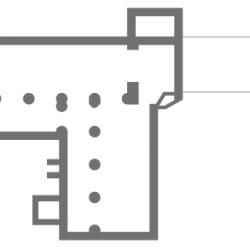 The Dominican priory in Kilkenny City was founded in 1225 by William Marshal the younger (1190-1231), earl of Pembroke. Kilkenny was the third Dominican foundation in Ireland, after Dublin and Drogheda in 1224.  The church was dedicated to the Holy Trinity and was founded in Kilkenny at a time when the town was being enlarged.  The foundation appears to have been part of a clear plan on the part of the order to first settle in the royal cities of Ireland, as they settled also in Waterford in 1226, Limerick in 1227, and Cork in 1229.  The large number of religious foundations established in the thirteenth century in Kilkenny, and in areas of royal influence in Ireland, also demonstrates the expansionist policy of the new Anglo-Norman colony. In the nineteenth century the medieval nave, transept and tower of the priory church, were restored for worship, and are still in use today.

William Marshal (c.1146-1219), first earl of Pembroke, succeeded Richard de Clare (1127-76), also known as ‘Strongbow’, as Lord of Leinster and dedicated much time and effort to the expansion of the Lordship.  He founded the Cistercian abbeys at Tintern in Co. Wexford (1200) and Graiguenamanagh (1204-7) in Co. Kilkenny. His son, William Marshal the younger, continued this policy, building castles in Carlow and Ferns, granting extended charters to Carlow and Kilkenny and founding the Dominican friary in Kilkenny.

William had been appointed Justiciar of Ireland in 1224 and it is possible that he was acting on behalf of King Henry III of England (1207-1272), when he founded the friary, with the Dominican order itself actively involved in securing the foundation. Furthermore, like the other mendicant friaries founded in royal cities the Dominicans received a number of grants from the English kings, suggesting that these friaries enjoyed particular royal protection.

Interestingly William Marshall the younger was not buried in Kilkenny Dominican friary when he died in 1231 but in Temple Church in London. His brother, Richard Marshal however (b.p.1190) was buried in the choir of the Dominican church when he died of a battle wound in 1234.

Kilkenny Dominican church, now known as Black Abbey, is the only one of the medieval houses still in the possession of the Dominican Order. Its most impressive feature is the magnificent five-light window, the largest of its kind in Ireland, filling practically the entire south gable of the fourteenth-century transept. The transept was integrated in the present church when the building was restored for worship in the nineteenth century, as were the thirteenth-century nave and aisle, and the sixteenth-century tower. A fourteenth-century limestone figure of St Catherine of Alexandria – protectress of the Dominican order – can be seen in the priory museum. A sculpted representation of the Trinity, carved in alabaster, was discovered during the restoration work of the early nineteenth century, and is now kept in a glass case attached to the central tower; it has been estimated to date back to c. 1400.

1234:  His younger brother Richard, 3rd earl of Pembroke, was buried in the choir of the church, which suggests that the construction was at least partially completed at that date

1244: Geoffrey de Turville (d.1250) became bishop of Ossory and made a grant of a conduit of water to the friars. The original grant is still among the Corporation archives

1251:  Another grant preserved in the Corporation archives is from Hugh de Malpilton (d. 1260), the Dominican bishop of Ossory, of the whole fountain of St. Canice to the Dominican priory

1259: Bishop Hugh, a great benefactor of the priory, died and was buried near the High Altar in 1259

1274: Gilbert de Clare granted the friars the right to grind corn at his mill

1348: On the 6th March eight Dominican friars died of the Black Plague

1353: The Corporation of Kilkenny granted the rent of two houses to the friars, to provide bread and wine for the celebration of Masses

1394: The friars were granted a tenement near the cemetery of the church of the Blessed Virgin Mary to supply them with bread and wine for Masses to be celebrated in their church

1437: Henry VI granted the friars two parts of all the tithes of the rectory of the church of Mothil. The friars had petitioned for this grant, explaining that because of wars between English rebels and the Irish, the friars could not live off the alms of the town and county of Kilkenny alone

1507:  The enormous tower of the Black Abbey was completed in this year.  An inscription at the base of the chancel arch asked for prayers for the souls of John Schortals, lord of Ballylarkin and Ballykeeffe, and his wife Katherine Whyte, who paid the daily wages of the workers

1519: John Riche granted the friars twenty-seven acres of land on the way leading to Dunfert

1540:  Peter Cantwell was the prior when the priory was suppressed, and was seized of a church and belfry, a small castle near the church, a dormitory above the chapter house, a room called the King’s Chamber with a small turret, a granary with two cellars underneath, a toft, the prior’s chamber, another chamber, a castle over the gate, as well as thirty-three messuages (dwelling houses with outbuildings and land assigned to their use), 180 acres of land and additional possessions

1543: The Dominican and Franciscan friaries were granted to Walter Archer, the sovereign, and to the burgesses and commonalty of Kilkenny. The Dominican church was turned into a courthouse

1603:   The friars attempted but failed to take back possession of the buildings. Friar Edward Raughter broke down the doors of the priory, pulled down the benches and seats of justice and set up an altar in the church.  They demanded the keys to the priory but failed.  Walter Archer, sovereign of Kilkenny (chief magistrate) was jailed for approving the seizure of Black Abbey and other churches in Kilkenny for Catholic worship

1643: Felix O’Conor was the prior of Kilkenny when the Dominicans eventually came back and repaired the priory.  At this time a provincial chapter was held there during the Confederate occupation of Kilkenny city

1722: The Peter Archer chalice was presented to the Dominicans of Kilkenny and was still in use in St. Johns parish church in 1902.  Its inscription read: Fr. Petrus Archer, Ordinis Sancti Dominici, Conventus Kilkenniae, me fieri fecit, 1722 (Fr Peter Archer, OSD/ OP (Dominican Order), Convent of Kilkenny, had me made, 1722)

1731: Five friars were reputed to live in the priory at this point

1744: The friars in residence in the priory were forced to leave although they were allowed to stay in the city, doing parochial work for the secular clergy

1775: The ancient choir was pulled down to build a small convent

1866: The nave was restored and opened for service

1894:  The present convent was built in place of the small house that had been in use for 120 years

1925:  The bell which had been given to the Kilkenny Dominicans in 1644 was restored to the priory in celebration of the 700th anniversary of the foundation.   It had been taken from the priory in the 1650s when it was in the possession of the Tynte family, who moved the bell to Dunlavin, Co. Wicklow.  It remained there, in use as the market bell until its return to Kilkenny was arranged in 1925