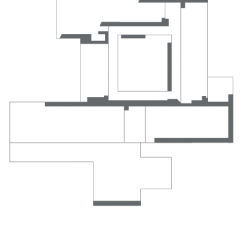 The ruins of the Franciscan friary are located on the outskirts of Donegal town, where the River Eske joins Donegal Bay. Situated just a short distance from the O’Donnell castle, the friary was founded as a Franciscan Observant house in 1474 by Red Hugh O’Donnell, chief of Tír Conaill and his mother Nuala O’Conor. It became one of the most influential Franciscan houses in Ireland from the fifteenth to the late seventeenth century, even though it was badly damaged in 1601 during the Nine Years War between Elizabeth I and the chiefs of Tír Conaill and Tyrone. Fragments of the church and the cloister arcade are all that remain of what was a particularly wealthy friary.

Red Hugh O’Donnell (1429-1505) was the son of Niall Garbh O’Donnell (1380-1429), chief of Tír Conaill and of Nuala (Fionnuala), daughter of An Calbach O’Conor Faly (d.1458), chief of Offaly. He spent much of his life engaged either in civil war in Tír Conaill with other members of the O’Donnell family or in conflict with the O’Neills of Tyrone over control of Connacht and Ulster. Red Hugh died in 1505 and was buried in Donegal friary.  Red Hugh’s wife, Nuala, daughter of Conor O’Brien of Thomond, became a Franciscan tertiary, following the rule of St. Francis while continuing to live life as a lay person, after her husband’s death. She was also buried in the friary in 1528.

An agreement concluded between Maghnus O’Donnell and Tadhg O’Conor of Sligo in June 1539 as part of a campaign against the Dublin administration was signed in Donegal friary and was witnessed by its Franciscan guardian as well as other leading clerics and the poets of Maghnus’s household.

The life and miracles of Friar Bernard MacGrath (d. 1546), a member of the Donegal community, was recorded probably from oral tradition by the seventeenth-century Franciscan Donatus Mooney, who himself was a friar in Donegal. Friar Bernard’s life echoes that of St Francis and among the many miracles attributed to him was to produce fish from an empty weir by sprinkling it with blessed salt. He also advised people to use holy water and recite prayers rather than turn to the charms and spells of witches to cure their cattle.

Despite the considerable damage caused by the 1601 explosion, the Donegal friars were immensely influential in the early seventeenth-century Irish history.  They maintained a presence in the area mainly working from their house of refuge near the River Drowes near Ballyshannon. More importantly, very prominent Donegal friars such as Mícheál Ó Cléirigh, main author of the Annals of the Four Masters, John Colgan, compiler of the lives of Irish saints, and Donatus Mooney, author of a history of the Irish Franciscans, organized a colossal project of saving medieval manuscripts and historical traditions from their college in Louvain (Leuven, Belgium). The impact of this project resonates to the present in the writing of Irish history.

Donegal was the heart of Irish Catholic activity during the sixteenth and seventeenth centuries and this is reflected in the history of this once powerful religious community.  While the ruins of Donegal friary do not reflect its original splendour, their scarred remains reveal the history of this once great foundation.  The location of the friary the waterfront in Donegal town looking out into Donegal Bay is picturesque but its prominent position at the entrance of the harbour in the merchant town underlies its importance.  Its proximity to the impressive O’Donnell castle, now largely restored, reveals the connection between the friars and their lords.  In fact, it is reputed that a subterranean tunnel was discovered in the nineteenth century that ran between the friary and the castle.  The condition of the ruins, containing two parts of the cloister, the chancel, one wall of the nave and the south wall of the south transept, highlight the violence of the time and evoke images of the repeated attacks on the friary in the late sixteenth century before the final, dramatic devastation of the friary in an explosion in 1601. 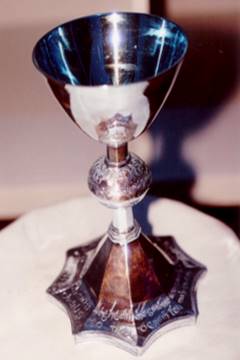 1497:  Sixteen friars were sent from Donegal to take over the friary at Carrickfergus, Co. Antrim as an Observant house

1539:  An agreement drawn up between Maghnus O’Donnell and Tadhg O’Conor of Sligo in Donegal friary that was witnessed by the Franciscan guardian, his community and other nobles

1550:  The bishop of Derry Rory O’Donnell and his grandson were buried in Franciscan habits in the friary

1588:  The forces of the crown plundered the friary and the guardian, Thady O’Boyle, was killed.  Much of the friary’s wealth was taken by the soldiers, who also destroyed religious statues and pictures

1592:  Red Hugh O’Donnell (d.1602) escaped imprisonment in Dublin and returned to Tír Conaill.  He expelled the garrison from the friary and allowed the friars to return

1596: Seán MacGrath, guardian of Donegal, appealed to King Philip II of Spain for financial assistance to rebuild and refurbish the friary

1601: Much of the friary was destroyed in an explosion during a siege involving Red Hugh O’Donnell (d. 1602) and his cousin Niall Garbh O’Donnell and Sir Henry Docwra

1607:  Hugh O’Neill (c.1550-1616), the ‘Great Earl’ of Tyrone, Rory O’Donnell, earl of Tír Conaill and Cú Chonnacht Maguire (d.1608), lord of Fermanagh left Rathmullan, Co. Donegal in ships bound for Spain.  The ‘Flight of the Earls’ left the Franciscans of Donegal without patrons in Ireland

1607: The Irish Franciscan College in Louvain was established under the patronage of King Philip of Spain and Pope Paul II. This college became the centre of exile for Donegal Franciscans, nobles and poets

1610: Donegal friary was granted to Sir Basil Brooke (d.1633), a captain in Docwra’s army, who rebuilt the O’Donnell castle in Donegal town.  A lot of the building materials from Donegal friary were used by new planter families, including Brooke, in their own buildings

1632-6:   Mícheál Ó Cléirigh and his fellow scholars lived with the Donegal Franciscan community while working on the Annals of the Four Masters

1698:  An inventory of liturgical and household goods was drawn up by the Donegal Franciscans in response to a legal act of 1697 demanding the exile of the friars from Ireland by 1698.  This inventory reveals a vibrant community that had grown over the seventeenth century and were in the possession of over twenty chalices

1704:  A friar named James O’Doughan was arrested and taken to Dublin to be transported abroad

1712:  A friar was reported to be celebrating mass near Ballyshannon

1740s:  The Franciscan community no longer existed, due to lack of novices or being harassed, leaving itinerant friars to minister as local priests