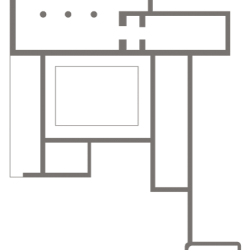 Claregalway was one of the first Franciscan houses founded in Connacht. It was strategically located close to Claregalway castle and the banks of the river Clare, guarding a natural route way between the port of Galway and eastern and northern Galway. It was built in phases over a long period of time, which is evident in the surviving fabric of the building. The friars initially enjoyed the protection of Sir Richard Burke (d.1582), the second earl of Clanricard. In 1570, the friary was granted to Burke but they were expelled after his death and the friary was used as a barracks by the forces of the Governor of Connacht. The friars sporadically used the friary down to the nineteenth century.

Claregalway friary was founded for the Franciscan order in the diocese of Annaghdown c. 1250 by John de Cogan, an Anglo-Norman knight.  He had marched with the army of Maurice Fitzgerald (d.1257), lord of Offaly and Justiciar of Ireland, Richard de Burgh and Hugh de Lacy II (d.1242), earl of Ulster into Connacht in 1235.  In 1252, de Cogan received a grant of a weekly market and an annual fair at Claregalway suggesting his intention to establish a borough at the crossing over the river Clare.

In the late thirteenth/early fourteenth century the ceremonial regalia of the bishop of Annaghdown was placed in safe keeping in Claregalway friary while the see was vacant.  During this period the bishops of Annaghdown were under the protection of the O’Flaherties, the Irish lords of the region, and became embroiled in a conflict with William de Bermingham, archbishop of Tuam.  In 1297, de Birmingham ordered the Episcopal regalia under the care of the Claregalway friars to be seized and taken to Tuam.   A long legal battle ensued and its outcome is unknown, but the dispute was brought before the Chief Justice of Ireland in 1300 and resulted in a papal order in 1303 requesting the intercession of the bishop of Limerick in the dispute.

In 1327, John Magnus de Cogan granted the friars lands and tenements in Clonmoylan near Lough Derg, Co. Galway.  In return, the friars presented the patron with a rose on the feast of St. John the Baptist, a tradition that was to be continued with his heirs.

During the dissolution of the monasteries, Claregalway friary was sacked by crown forces, who seized anything of value, including chalices, crosses and bells.  In 1541, the friary was ransacked for lead, glass, timber and slate.  The friary was granted to Sir Richard Burke in 1570, who permitted the friars to reside in Claregalway, but they were forced out when the friary was converted to a barracks by Sir Richard Bingham in 1589.

The Claregalway friary is a well-preserved complex situated in a medieval landscape with a trackway between it and the nearby tower house and trace of a settlement at the lowest fording point on the river. The friary consists of a nave and chancel church constructed at different periods between the thirteenth and fifteenth centuries. The six pairs of lancet windows in the chancel date to the earliest period of building while the slender, three-storeyed tower, a typical feature of Irish Franciscan houses, was inserted into the church in the fifteenth century. The traceried window was placed in the east gable as part of the later re-building. While the friary was founded by John de Cogan and endowed by the local Irish nobility such as the O’Heynes, it was also the burial place of the powerful de Burgos, marked by a canopied tomb niche in the north wall. The other substantial buildings are domestic ranges dating from various periods.

1250: A Franciscan friary was founded in Claregalway by John de Cogan I, an Anglo-Norman adventurer.  He had been granted Claregalway as reward for his involvement in the conquest of Connacht c.1235.  Eugene O’Heyne, a local noble, provided the friary with a dormitory, having provided the same for the Dominicans of Athenry in 1241.

1252: De Cogan received a grant to hold a weekly market and an annual fair in Claregalway, probably with the intention of establishing a borough.

1291: An indulgence was granted to penitents who visited the church.

1296: Philip de Blund, archdeacon of Tuam, was indicted for removing the pontificalia (a bishop’s insignia, which included the ring, mitre, sandals, pectoral cross and crosier) of the bishop of Annaghdown from Claregalway friary where it had been placed in safekeeping. The diocese of Annaghdown had been united with Tuam in 1263.

1297: The Franciscans of Claregalway and the Dominicans of Athenry were involved in a dispute with the archbishop of Tuam, William de Bermingham (d.1312) and his archdeacon, Philip de Blund, who had forbidden the faithful from providing the friars with food.

1324: As part of a papal investigation into the Irish Franciscan province, Gaelic friars in a number of friaries, including Claregalway, were to be reassigned to other houses in the province.  Claregalway and Galway were the two friaries permitted to appoint Gaelic guardians.

1327: John Magnus de Cogan (III) refers to himself as the founder but it was more likely that he was a patron who expanded, rather than founded, the friary.

1328: Robert, bishop of Annaghdown sued the Archbishop of Tuam, Malachy for having taken his goods by force from Claregalway (Strothyr Clare) valued at £40.

1333: Philip Hamlin gave 10 acres of land to the friars to provide bread and wine for their masses.

1368: Lands in Clonmoylan were granted to the friary by Thomas de Bermingham, lord of Athenry.

1386: John Roch granted the friars the lands of Clonmoylan, while Alice Kerry gave them two tenements and two and a half acres of land.

1387: The friars received further gifts of land from Joanne Brown and James Caer, dean of the Diocese of Tuam.

15th century: The tower in the friary was added to the earlier church.

1426: William Pulard, a friar from Claregalway received a dispensation for accidently injuring a layman, Donald O’hAschi, during a game that later died of his wounds.

1433: Pope Eugene IV granted an indulgence of four years and four quarantines to the faithful who visited Claregalway Franciscan friary to contribute to the renovation of the church and the completion of the tower.

1538: Lord Leonard Grey was sent to Galway City by Henry VIII, with his troops stripping Claregalway friary of all chalices, bells and crosses en route.

1567: The friary became an Observant house

1570: The friary was granted to Richard de Burgo, who allowed the friars to remain in residence

1588/9: The friars were driven out of Claregalway by Sir Richard Bingham, Governor of Connacht (d.1599), and the friary was converted into a barracks for his forces

Early 17th century: The Franciscan chronicler Donatus Mooney described the woodwork in Claregalway friary as being of a very high quality

1731: Edward Synge, Anglican archbishop of Tuam recorded that there were three friars still living in Claregalway.  The high sheriff of Galway, Stratford Eyre, seized a number of documents from Claregalway friary

1732: Sheriff Eyre reported that the friars lived close to the friary, and were building a large house in the estate of Thomas Blake.

1744: Richard Croasdaile, a priest hunter, included the names of the guardian and a friar of Claregalway in a report to Dublin Castle.

1752: The Anglican bishop of Meath, Pococke, travelled in Connacht this year and observed that the chapel of the church at Claregalway was converted into a mass house. The use of the side chapel suggests the dilapidated condition of the friary church itself.

1791: Coquebert de Montbret, French consul at Dublin recorded that the friars residing among the ruins of Claregalway.

2010/11: Excavations carried out close the friary impinged on the medieval graveyard and a number of burials and objects including medieval green glazed imported pottery, fragments of floor tiles and worked bone pieces were discovered. Some of the burials seem to have been located outside the friary precinct and had the characteristics of deviant burials