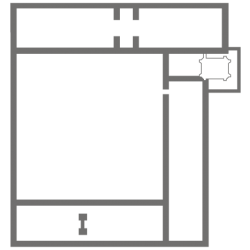 Clare Abbey lies on the west bank of the river Fergus, a mile south of Ennis and north of the village of Clarecastle. It was founded some time prior to 1189, possibly by Donal ‘the Great’ O’Brien, who confirms the foundation in a twelfth-century charter.  As with a lot of medieval sources, there are some doubts over the authenticity of the charter as it only survives to date in a copy from 1461. Clare Abbey is one of a number of Augustinian houses in the River Fergus valley and estuary, along with Canon Island, Killone nunnery and a small house in Inchicronan Lake. Despite a seemingly poor location on rocky grassland, its position in O’Brien’s territory on the river Fergus, in addition to its extensive possessions, ensured its status as one of the most important monasteries in the diocese.

Donal ‘the Great’ O’Brien (d.1194), king of Munster is said to have founded Clare Abbey in 1189, although the charter confirming the foundation was probably forged in the fifteenth century. A descendant of Brian Boru (d.1014), in 1171 Donal submitted to Henry II (d.1189).  He successfully fought against Norman incursions in the southwest of Ireland after his submission, driving them out of Limerick in 1178, and defeating them again in 1185 and 1188.  At the same time, he was embroiled in a fight within his own family and against other Irish septs to consolidate his power. Beside Clare Abbey, Donal also established the Cistercian monasteries of Holy Cross (1180) and Kilcooly (1184), both in Co. Tipperary.

Despite Donal’s efforts to secure his lands against Norman expansion, parts of his possessions were enfeoffed (giving freehold property or land in exchange for their pledged service under feudal system) to Anglo-Norman lords, but the establishment of a Norman settlement in Clare, a mile south of the abbey, was short-lived. By 1270 the O’Briens had taken over Clare castle and destroyed the settlement.

Sources indicate that Clare abbey grew in importance from the late fourteenth century, but recent archaeological excavation revealed that wine and storage containers were imported from southwest France and Bristol from the twelfth century onward, and that the monks already enjoyed a rich diet of fish, beef, pork and mutton at the time.

In the fifteenth century, Clare Abbey came under the control of the Mac Craith family. At least five members of this family were elected abbots, some of them becoming bishops of Killaloe or Clonfert. However, control over the abbey seems to have shifted to the powerful O’Briens towards the end of the fifteenth century: Toirdelbach O’Brien was chosen as abbot in 1473, despite a formal complaint to the pope from Matthew Mac Craith, former abbot and bishop of Clonfert.

The monastery was dissolved in 1543, and the site and possessions were granted to Donogh O’Brien (d.1553), 2nd earl of Thomond and 1st baron of Inchiquin, also known as Donogh ramhar, meaning Domhnall ‘the fat’. After the dissolution the monks might have continued to occupy the monastery, although the abbots named in the seventeenth century were more than likely titular. It was regranted to Conor O’Brien (d.1581), 3rd earl of Thomond in 1573, but the use of the abbey’s buildings was leased to various families over the course of the seventeenth century

A sketch by Thomas Dyneley from 1681 shows that the abbey’s kitchen, in the south range, had been converted to a house.  Evidence from the excavation in 2008 also points out to the possible military use of the abbey, perhaps associated with the wars of the seventeenth century when spur parts and a 1691 James II halfpenny were found. During 1690 and 1691 numerous sources, including the contemporary diary of Williamite Colonel Michael Richards, attest to the presence of a Jacobite horse camp, which was primarily composed of Irish cavalry and dragoons. It is also recorded that a Jacobite Irish garrison occupied Clare Castle ½ mile to the south, and that French Officers and Cavalry were in this location as well.

The remains of Clare Abbey are rather extensive and while the architecture is simple, its setting and a few notable features makes it well worth a visit. The remains consist in a church with a belfry, and two ranges of domestic buildings to the east and the south, around a cloister garth. Unlike many other monasteries, there was no west range in Clare Abbey. The church likely dates to the late twelfth century, but the tower between the chancel and the nave was added in the fifteenth century. The most notable architectural features in the abbey are three inserted fifteenth-century traceried windows. Two are in the chancel, and include the east window, a pointed three-light with a small carving of a human face above the hood. In the south gable of the east range, above the original window, an elaborate design of cusped tracery consisting of six trefoils and a quatrefoil was inserted, framed in a richly moulded projecting hood.

1189: According to the 1461 ‘copy’ of a confirmation charter, Donal ‘the Great’ O’Brien founded the abbey and that year confirmed its possessions.

1226:  A papal letter was issued from Honorius III against Robert Travers, who was accused of being appointed bishop of Killaloe unjustly through simony.

1278: Mahon, son of Domhnall Connachtagh O’Brien and his adherents billeted (temporary lodging of soldiers in a civilian dwelling) themselves at Clare Abbey.  They marched out to meet the forces of Domhnall O’Brien in battle but were ambushed and massacred.

1302-06: In the taxation for these years the abbey was valued at two marks.

1394-1490: during this period, Clare Abbey’s abbots were the executors of twenty-seven mandates.

1399: Donatus Mac Craith was made Bishop of Killaloe.

1434: An indulgence was granted to penitents visiting and giving alms for the repair of the church.

1458: Matthew Mac Craith takes over his father Roderick as Abbot. He later becomes bishop of Clonfert, but keeps the abbacy until 1470.

1483: Toirdelbach O’Brien, bishop of Kilalloe, is given the abbacy of Clare Abbey. Despite protest from Matthew Mac Craith, now bishop of Clonfert, a papal investigation later decides in favour of the O’Briens.

1543: The abbey is dissolved and the site and possessions are granted to Domnall Ramhar (meaning ‘the fat’) O’Brien, 2nd earl of Thomond and 1st baron of Inchiquin.

1555: A papal bull was issued to Matthew Ο’Griffa, canon of Killaloe, in order to assist the bishop of Killaloe, Turlough O’Brien, in implementing certain papal ordinances that were to take effect concerning the administration of Clare Abbey.  It admonished various clerics and laymen for their inadequate management of their office, including financial mismanagement.

1613: Nicholas O’Nelan, abbot of Clare Abbey, is given in the list of monks living in the diocese of Killaloe.

1622: The abbey and 320 acres of land were leased to Robert Taylor and his family.

In the same year, Teige O’Griffa, a priest, officiated at Dromcliff, Killone, and Clare Abbey.

1681: A sketch by Thomas Dyneley shows that the abbey’s kitchen, in the south range, had been converted to a house.

1690 & 1691: Sources iattest to the presence of a Jacobite horse camp, which was primarily composed of Irish cavalry and dragoons. It is also recorded that a Jacobite Irish garrison occupied Clare Castle ½ mile to the south, and that French Officers and Cavalry were in this location as well.