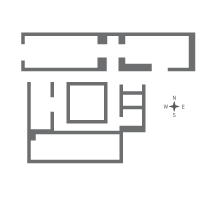 Castlelyons is a village in east Co. Cork, where a Carmelite friary lies at the corner of Main Street and Rathcormack Lane. It was founded in August 1309 when King Edward II (1284-1327) granted John de Barry (c.1265-1330) the right to give the Carmelite friars of Drogheda a plot of land in Castlelyons. The friary was dedicated to the Blessed Virgin Mary. However, in 1314 the friars had not obtained authorization from the pope to build the friary. Pope John XXII (d.1334) finally gave them the licence to return ten years later. The church was built in the fourteenth century but most of the remaining nave, domestic ranges and the tower date to fifteenth century.

John inherited the lordship when his father David de Barry III died c. 1290.  John was a knight who regularly served in the wars of the kings of England in Scotland and France.  He married Maud de Boulltron but died without issue, and the lordship passed to his brother David de Barry IV (d.1347).  Before his death, John also granted his other brother William (d.1373) the family’s land in West Cork.

Castlelyons is one of the few Carmelite friaries in Ireland that has extensive standing remains. The church, the tower, and the east and west ranges still stand, with evidence of conservation work undertaken by the OPW in the 1930s.  Notable features include the church’s fifteenth century pointed-arch west doorway, with a stoop on the inside of the door on the left hand-side when entering the nave.  A stone altar of an unknown date survives in the choir, as well as late medieval and modern grave slabs covering part of the ground.  An anti-clockwise spiral stairway leads up to the top of the three storey tower.  The night stairs which the friars would have taken to reach their dormitory in the west range survives in the north-west corner of the cloister walk.

1308:  Edward II ordered an inquiry to verify the granting to John de Barry of a licence to give the Carmelites of Drogheda land in Castlelyons

1314:  The friars were living in Castlelyons without the pope’s permission, having failed to obtain the papal licence allowing them to build a friary there

1324:  The friars in Castlelyons eventually received the pope’s permission in a papal licence

At an unknown date, the king gave the friars 20 marks to be taken every year from the income of the town

Prior to 1541:  The history of the friary is unknown for large periods of time as it is not mentioned in any official records until its dissolution

1568:  Viscount Barrymore was to be granted two of the following monasteries: Ballybeg, Buttevant, Castlelyons, Timoleague

1638:  Windows from Castlelyons friary were brought to Lismore and used in the renovation of the cathedral there by the Earl of Cork

1737: The friary was re-established

Mid-19th century:  John Windele, antiquarian, visited Castlelyons and mentioned that the nave was being used as a ball alley by the villagers

1930s:  Some restoration work was undertaken by the OPW