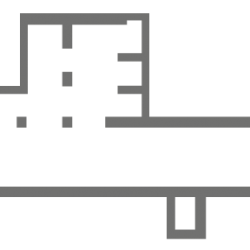 The Franciscan friary of Castledermot in south Kildare was founded sometime before 1247, when it received a royal grant of 15 marks from John Fitzgeoffrey (d.1258), Justiciar of Ireland. It is believed that the founder was Walter de Riddlesford II (d.1238/9), lord of the town of Thrisledermot, as the town was then known. His father, Walter I (d.1226), probably founded the priory and hospital of St John the Baptist for the Fratres Cruciferi in Castledermot prior to 1216. His daughter Emeline or Aveline married Stephen Longespée (1216-60), Justiciar of Ireland and cousin of Henry III, in c. 1243. It is possible that they were involved in the foundation of the friary. In the early fourteenth century, a side-aisle and transept were added to the thirteenth century nave and choir, possibly as early as 1302. The foundation suffered during the Bruce invasion of Ireland (1315-18) and was dissolved in 1540.

Walter de Riddlesford II (d. c.1238) was an Anglo-Norman magnate, who inherited the baronies of Bray and Kilkea from his father Walter de Riddlesford I (d. 1226).  Richard de Clare (1130-76), also known as ‘Strongbow’, had granted Walter I these baronies around 1171-2. Walter I founded the borough of Thrisledermot on the site of ninth century monastery, Díseart Diarmada. The settlement was planned out by Walter I and further developed by his son, Walter II.   The de Riddlesford castle has not survived in Castledermot, but it is believed to have been located to the west of the town, at a site called Rahard (Rath Ard < ‘the high fort’), which has long since been leveled.

The borough parish church was built on the site of the monastic church, where St James’s Church of Ireland church now stands. Two tenth century high crosses and a round tower also survive in the church graveyard.

The remains of Castledermot Franciscan friary represent an impressive testimony to thirteenth- and fourteenth-century Irish Gothic architecture. They consist of the friary church, with its northern aisle and transept.  In the majority of Irish friaries, towers were built between choir and nave.  An unusual feature of Castledermot is that the tower was placed directly to the south of the choir, most likely for defensive purposes, as the friary appears to have been located close to the town wall.

The cloister and domestic buildings are all but gone, the importance of Castledermot friary and the wealth of its patrons are clear from the striking windows in the east gable of the church and in the transept north wall. Their internal mullions have disappeared but their sheer height and width are impressive.  In the transept, an arcade of three imposing pointed arches divides three eastern chapels.

1247:  John Fitzgeoffrey, Justiciar of Ireland was instructed by King Henry III to grant 15 marks to the Franciscans of Thrisledermot

1264: The first documentary reference to a parliament in Ireland was recorded in Thrisledermot, hinting at the importance of the borough at this time

1297: Andrew Donne, a young man from Castledermot, was charged and was fined 40s for breaking open the storage chest of his father in the Franciscan friary

1307: Michael Talbot, a knight, was ordered to reimburse the friars money he owed them. This suggests that the Castledermot Franciscans were acting as moneylenders, as well as offering their house for security

1317: The friary was plundered and ruined by Robert Bruce and his army, during his destructive campaign in Ireland between 1315 and 1318.  Construction of the north transept may date to shortly after this time

1394/5:  In the friary church, some Irish men (described as ‘Lysagh Ferison and O’Connor, of the nation of Hyrth and O’Tothill’) did homage and were ‘received to the king’s fealty’ (essentially pledging their allegiance to the king)

1406/07: King Henry IV instructed Stephen Lescrop, deputy of Thomas Lancaster (1387-1421), Lord Lieutenant of Ireland, to pay the friars a yearly alm of £10.  This was in response to the community’s appeal for royal alms, having been left with little means, due to the destruction of the town and surrounding countryside by Art Mac Murrough (1357–1416/17), king of Leinster

1485:  Garret the Great (Gearóid Mór) Fitzgerald (d.1513), 8th earl of Kildare, rebuilt the castle at Castledermot to aid in the recovery of his lands in nearby Carlow

1540: Jurors working as part of the dissolution of the monasteries decided that the church, cloister and dormitory could be demolished. They listed other properties, which included a tower, two halls, a kitchen, a garden, an orchard, a cemetery, a stonewalled courtyard enclosing three messuages (dwellings with outbuildings lands for use) and fields of 10 acres and a water mill as well as customs

1639: There were Observant Franciscan friars in the friary

1650: The friary was destroyed during the Cromwellian conquest of Ireland (1649-53), during which time, Cromwellian forces were rumoured to have captured three unnamed friars in Castledermot and possibly murdered them

1779: By this date the friary church had been turned into a court for the game of handball called ‘fives’

1830’s: Samuel Lewis described the remains of the friary as being ‘extensive and beautiful’.  He described the north window in the church transept as a ‘magnificent window of four lights, with a large cinque-foiled circle in the crown of the arch, having the spandrils ornamented in trefoil’

1834:  An engraving in the Dublin Penny Journal from 19 April reveals that much of the friary was covered in ivy at the time and the south window in the southern transept still contained the window tracery, now long gone

1912: A large portion of the southwest wall of the friary collapsed