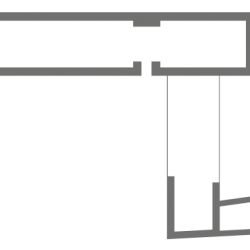 The remains of Carlingford Dominican friary are located to the south of the old part of town, off Dundalk Street, and in the Middle Ages it would have been located just outside of the town walls. The surviving buildings consist of a nave and choir church with a tower dividing up the space. The friary was dedicated to St Malachy. There are also very slight remains of the east range and of a fifteenth or sixteenth-century tower at the south end of the range. While the foundation of the friary has been traditionally associated with Richard de Burgh, the ‘Red Earl’ of Ulster, in 1305, surviving documentary evidence suggest that the site where the remains of the friary stand was given to the friars by several burgesses of the town, in 1352.

While there is no evidence for founding the friary in 1305 by Richard de Burgh, the seventeenth-century historian, James Ware, recorded that the Earls of Ulster were the patrons of the friars.  However, he does not specify what they gave them, nor if they funded the construction of the friary. Richard the ‘Red Earl’ was the 2nd Earl of Ulster and the most powerful of the de Burgh Earls. He was a friend of King Edward I of England (d. 1307).  Despite his daughter Elizabeth marrying King Robert the Bruce of Scotland (d.1329), he led a force against Robert’s brother Edward when he invaded Ulster in 1315. He died on 29 July 1326 at Athassel Augustinian Priory, County Tipperary, which had been founded by his great grand-father Walter de Burgh (d.1205/06).

Whether or not the Earls of Ulster were benefactors of Carlingford friary, a document dating to 1352 survives suggesting that the site where it stands, as well as additional property within the town, were given to the friars by a number of inhabitants of the town.   The document lists each of them: Richard fitz Symound, Richard Roper, Thomas, late vicar of the church of Carlingford, Adam Menerel, Roger de Kendal, Adam Silvester senior, John Smyth, Joan Quarier, William Pillard, Adam Silvester junior, and Richard Simound. The grant is made ‘to the Dominican friars of the town’, suggesting they might have already been residing in the town for a number of years. Interestingly, between 1307 and 1322, two Archbishops of Armagh, Walter and Roland Joyce were Dominican friars; they could have facilitated the arrival and settlement of the friars in the town during that time, before they obtained a permanent site from the townspeople a few years later.

Carlingford is located on the Cooley Peninsula, between Carlingford Lough and Slieve Foy, the highest peak in County Louth.  The town contains a wealth of medieval heritage sites, with the modest remains of the friary to the south of the picturesque town, King John’s Castle to the north and Taafe’s castle, a sixteenth-century fortified townhouse, just a short walk away. The fifteen-feet-wide east window does not survive, but it probably was a group of graded lancets. Unlike many other mendicant churches, the tower in Carlingford is part of the original structure; on the other hand, the nave is a single aisle, with no lateral aisle or chapels, such as were added to many Franciscan and Dominican churches in the course of the fourteenth century. The nave was altered in later times however, with crenellations (the battlements of a castle or building) and small corner turrets added to its west wall, which can still be seen today.

1352: The friars were given a site to build a friary by a number of burgesses of the town.

1494: On the 15 June, Ottaviano Spinelli de Palatio, Archbishop of Armagh and Primate of All Ireland, absolved one Patrick O’Hanlan in the choir, in the presence of prior, Walter Harte.

1496: On the 14 June, again in the choir, before the high altar, Hugo Magnyse, chief captain of his nation, was examined by Patrick Plunket, gentleman, during an inquiry about Hugo’s role in the Earl of Kildare’s war on Edward Poyning.

1539: It was found that the church was standing, and used for the accommodation of fishermen, assembling there every year to catch herrings.

1540: At the general suppression of monasteries, the friary was recorded as being ‘a strong mansion needing no expenditure on repairs, but on every side strongly fortified’, and in possession of a park or close containing 1.5 acres, seven messuages and a water-mill in the town of Carlingford.

1542-43: An Inquisition was held in the friary, and the prior was found to be in possession of a church and belfry, chapter-house, dormitory, hall, kitchen and other buildings; one acre, one park, one close, several messuages and a watermill.

1552: The friary, with 2.5 acres within the precinct, the seven messuages and the water mill, were granted to Nicholas Bagnall without rent.

1607: Arthur Bagnall alienated the friary and its possessions to sir Arthur Chichester and others.

1613: King James I re-granted the friary to Arthur Bagnall.

1670: Archbishop of Armagh and Primate of All Ireland Oliver Plunkett reported that there were five friars in Carlingford, and that the prior, Eugene Quigley, was one of the best preacher in the kingdom. He also recounted how the Franciscans contended against the right of the Dominicans to live there, and that he summoned a meeting to resolve the dispute.