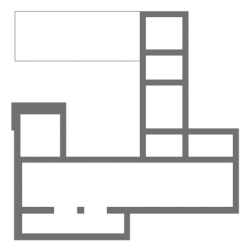 The remains of Burriscarra Augustinian friary stand in the picturesque landscape of the barony of Carra in Co. Mayo, close to the shores of Lough Carra.  The friary was originally founded in 1298 for the Carmelites, another mendicant order, by Adam de Staunton (d. 1300). By the early 15th century, the friary had lain abandoned by the Carmelite friars for over thirty years. In 1413, the deserted friary was handed over to the Augustinian friars of nearby Ballinrobe at the instance of Edmund and Richard Staunton. They were descendants of the original founder of the friary, Adam de Stauton, and had received permission for that transfer of the friary from Maurice O’Kelly (Muircheartach mac Pilib Ó Ceallaigh), (d.1407) Archbishop of Tuam.  The remains are quite extensive, and consist of the church, the sacristy, the east range, and part of the west range of domestic buildings where the friars lived and worked.

The de Stauntons or Stantons were Anglo-Norman barons who likely hailed from Stanton in Warwickshire in England, and were supporters of the Richard Mór de Burgh (d.1242), 1st lord of Connacht.  The likely founder of the original Carmelite friary was Adam de Staunton, who had been given permission by the Red Earl of Ulster, Richard Óg de Burgo (d.1326), 2nd earl of Ulster and 3rd lord of Connacht, to also build the neighbouring fortification at Castlecarra, which sat on the north-eastern shore of Lough Carra. His grand-father, also named Adam, was lord of Moone in County Kildare, and obtained the cantred of Cera, in the southern part of the present barony of Carra, County Mayo, as well as the part of the barony of Kilmaine north of the river Robe, which rises near Ballyhaunis and enters Lough Mask near Ballinrobe. Many de Stauntons took the name McEvilly or Mac an Mhilidh (descendant of the knight) after the heinous murder of Edmund de Burgh, younger son of the Red Earl.  Members of the Staunton family had been charged with guarding Edmond, who had been captured by his kinsman, Sir Edmond Albanach de Burgh, known as ‘the Scot’.  The Stauntons, fearing for their safety if the Red Earl’s son was released, tied him up in a bag, weighed it down with stones and drowned him in Lough Meask.  This earned the family the name Clan Ulcin, meaning the children of evil, hence the name change to McEvilly!

The transfer of the Carmelite friary to the Augustinian friars was finalised by Papal decree from Pope Gregory XII (d. 1415). Edmund and Richard Staunton are named as having prompted a group of Augustinian friars, led by a friar named Mattew Omaan, to inhabit the friary. The decree specifies that they did so with the consent of both Maurice, Archbishop of Tuam, and Henry, rector of the parish church of St. Mary and the Holy Cross, which is probably the medieval church located just a couple of hundred meters from the friary. However, the transfer did not take place without a hitch; in 1438 Gerardo da Rimini, the order’s Prior General, ordered William Wells, the English Provincial, to investigate and be the judge on a dispute between the Carmelites and the Augustinian friars about the occupation of this friary. He appears to have decided in favour of his fellow Augustinians, and they remained in possession of the friary until its suppression.

The remains of Burriscarra are amongst the most extensive of the Augustinian order in Ireland, which gives them an important place in the architectural heritage of Irish mendicant friaries, dominated by the Franciscan order. They are also located in a very picturesque landscape, on the shores of Lough Carra, and near another medieval building, the fourteenth-century parish church of Buriscarra. In the friary church can be observed typical features found in mendicant churches: sedilia, where the clergy sat during mass, and a piscina, used for washing sacramental vessels. The sedilia features a hood moulding with carved heads at each end. They are unfortunately quite damaged, but might have represented patrons of the friars, perhaps involved in the construction of the church. The survival of part of the domestic buildings, a rare occurrence in an Augustinian context, give the visitor an insight into the friars’ everyday life; where they worked, ate and slept.

1298: A Carmelite friary is founded in Burriscarra, most likely under the patronage of Adam de Staunton

1383: The friary is abandoned by the Carmelites and lies unoccupied for about thirty years

1413: Pope Gregory XII gives his assent to the transfer of the friary to the Augustinian friars, at the instance of Edmund and Richard Staunton

1430: Pope Martin V offers indulgences to anyone who would visit the friary and give alms for the restoration of the friary church, which was burned down

1438: The Augustinian prior general asks the English provincial to investigate and judge a dispute between the Carmelites and the Augustinian friars about the occupation of the friary

1607: The friary is granted to John Kinge, later Sir John Kinge of Dublin

1608: Oliver Bowen purchased the friary and lands of Burriscarra from King.  He held the castle of Carra and Burriscarra friary until the outbreak of war in 1641, when he fled to Wales, dying without an heir in 1654

After 1660: Following the Restoration of the monarchy, the friary is granted to Sir Henry Lynch, 3rd Baronet.  Henry was a lawyer and was appointed Recorder of Galway when the Catholic Corporation was restored by King James II in 1686.  He was raised to the Judicial Bench as a Baron of the Court of Exchequer in Ireland. He fled to France after the defeat of the Jacobites in Ireland, and died there in 1691

1910:  The 11th Baronet, Sir Henry Lynch Blosse, had recently sold the long neglected castle of Carra and Burriscarra friary to the Congested Districts Board of Ireland, ending 250 hundreds years of Lynch ownership of the friary

1962: The Office of Public Works carries out a conservation project on the friary