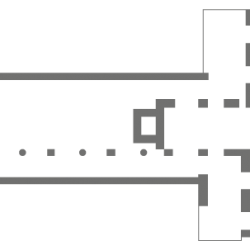 Baltinglass abbey is situated close to the river Slaney in a valley of the Wicklow Mountains which was a strategic pass between north and south Leinster. The original place name Belach Conglais ‘the pass of Cú Glas’ retains the name of a mythological hero Glass who was reputedly killed by magical wild boars. The archaeology of the surrounding environs, and especially the substantial hillfort of Rathcoran on Baltinglass Hill overlooking the river valley testifies to strategic importance of Baltinglass from prehistory. It is likely that Dermot MacMurrough, who as king of Leinster often used ecclesiastical patronage to further his military and political ambitions, endowed Baltinglass with a view to strengthening his grip on the provincial kingship of Leinster. Baltinglass was the second daughter house of Mellifont abbey, Co. Louth, the first Cistercian house in Ireland (fd. 1142). Dermot granted Baltinglass abbey eight separate parcels of land in the Cos Wicklow, Carlow and Kildare. It became the motherhouse of Jerpoint abbey in 1180. The ruins of the twelfth-century Romanesque church are all that survive of the monastery and they consist of a long and elegant nave arcade and a range of sculptural details on capitals and in the east end of the church.

Dermot MacMurrough, king of Leinster, was a dominant figure in the twelfth-century Irish ecclesiastical and political landscape.  One of his wives was Mór daughter king of northern Leinster and half-sister of Lorcán Ua Tuathail (St Lawrence O’Toole), abbot of Glendalough and archbishop of Dublin (d. 1180).  Ua Tuathail’s influence on Dermot’s ecclesiastical policies was considerable and most particularly in the king’s involvement in endowments to new monastic foundations. Dermot endowed St Mary’s abbey Ferns, Co. Wexford, All Hallows priory in Dublin and Kilkenny abbey, Co. Kilkenny.

MacMurrough was a highly ambitious king who aimed at becoming high-king of Ireland.  He expanded his kingdom in the 1130s, conquering the neighbouring kingdom of Ossory (Osraige, modern day Kilkenny and western Laois) and raiding into the midland over-kingdom of Mide.  He ruled the wealthy Norse towns of Dublin, Waterford and Wexford at various stages during his career.  His expansionist policies brought him into conflict with rival provincial kings, especially with the O’Conors of Connacht.  When his enemies joined forces, he was stripped of his kingship and forced out of Leinster in 1166.  He returned in 1167 with support from Henry II, king of England but it was not until the arrival of Strongbow in 1170 that MacMurrough had the forces to regain his kingdom.  He died in Ferns in 1171.

The detailed record of Baltinglass abbey’s extensive estates In modern counties Carlow, Kildare, Laois and Wicklow is preserved in a charter confirming its possessions granted by John, Lord of Ireland, in 1185. The charter refers specifically to the earlier grant made by Dermot MacMurrough and his men. The abbots of Baltinglass  politically active especially during the thirteenth century. Of greatest note was Ailbe Ua Máel Muaid (Albinus O’Mulloy) (d. 1223), abbot of Baltinglass and later bishop of Ferns, suffragan bishop of Winchester and loyal courtier to King John. Not all abbots of Baltinglass, however, acquiesced to the crown, the Anglo-Norman archbishops of Dublin or even Cistercian central authority.  During the racial dispute in the order known as the conspiracy of Mellifont and the Jerpoint riots in 1227, Baltinglass was made subject to Furness in England and the deposed Irish abbot, Malachy described by the English Cistercian as ‘that perverse and deceitful fox’, went to Citeaux and to Rome to plead his case.

Baltinglass Cistercian abbey is situated close to the banks of the river Slaney and somewhat hidden away deep in the Wicklow Mountains.  Now on the outskirts of the town of Baltinglass, Co. Wicklow, the abbey was a more extensive foundation consisting of conventual buildings and a tower house (demolished in 1882 and used in the fabric of the Church of Ireland rectory). Although only part of the church survives above the ground, Baltinglass offers an excellent example of Romanesque architecture and sculpture, apparently the work of local masons – one known as the ‘Baltinglass master’ whose work is also evident in Jerpoint – and possibly of English West Country sculptors.

1148 x 1151: Baltinglass Cistercian abbey founded by Dermot MacMurrough, king of Leinster as a daughter-house of Mellifont

Before 1180: Ailbhe Ua Máel Muaid became abbot of Baltinglass. He was appointed bishop of Ferns in 1186

1180: The Cistercian abbey at Jerpoint, Co. Kilkenny became a daughter-house of Baltinglass

1185:  John, Lord of Ireland, confirmed the extensive lands granted to Baltinglass by Dermot MacMurrough and his men

1227: Baltinglass was made subject to Furness Abbey in England and Abbot Malachy was deposed and replaced by an unnamed English abbot who failed to establish his authority in the monastery

1228:  Despite being ordered to go to Fountains abbey in England by Abbot Stephen of Lexington, Malachy went to Citeaux and Rome with the abbey’s seals and charters

1295:  A licence was granted by the King to the abbot of Baltinglass to negotiate with the local Irish who had raided the abbey’s lands to have their goods returned for a ransom

1380: The parliament enacted that no Irishman should be professed in a number of Cistercian abbeys including Baltinglass

1488:  The abbot of Baltinglass received a pardon for being involved in the failed Lambert Simnel rebellion, which had sought to place a pretender on the throne of England in 1487

1536: The abbey was suppressed. John Galbally, the last abbot, received a pension of £10

1540-41: Inquisitions recorded the extent of the abbey as comprising a ruinous church, a castle, a hall with chamber, a ruinous kitchen, a dormitory with two cellars, a chamber with a store beneath, a granary and a water-mill and c. 2,300 acres of land and other buildings.  This was all valued at £126 10s. 1d. The site of the monastery was granted to Thomas Fitzeustace, lord of Kilcullen, later viscount of Baltinglass

Following the Dissolution the church was deemed parochial and the east end continued in use as a Church of Ireland church until 1883, when it was replaced by a more modern building constructed beside it, and the abbey became a national monument