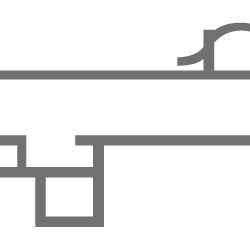 Once standing on the periphery of the medieval town of Ballinrobe, the remains of the Augustinian friary are now located very much within the town, only a few hundred meters north of the town centre. A reference to the friary appears in the register of the Dominican priory of Athenry in 1337, proving that it was founded sometime prior to then. Only the church ruins survive, standing within its own graveyard just above the former flood plains of the River Robe flowing west of the site. While Ballinrobe became a thriving market town, in the first decades of the fourteenth century when the friars arrived, the town did not exist. The settlement seems to have grown following their installation, with Ballinrobe considered by some to be the oldest town in Co. Mayo.

Aside from the mention in the Athenry register, there are no records relating to the foundation of the friary, so it is not known when, or by whom, it was founded. An unpublished history of the Augustinians in their archives at St. John Lane in Dublin claims that the friary was founded in 1337 by a man called Roger Taffe. However, a reference to the cloister of the friary in 1338 suggests the foundation must have occurred a few years earlier.

It has been suggested that Elizabeth de Clare (d.1360), granddaughter of King Edward I (d.1307) and wife of John de Burgh (d.1313), son and heir of the 2nd Earl of Ulster, Richard Óg de Burgh (d.1326), could have been a patron of the friars. Indeed when they married in 1308, Richard gave John and Elizabeth the manor of Lough Mask, where Ballinrobe was located.  In 1248, her ancestor Richard de Clare (d.1262) had introduced the Augustinians to England in Clare (Suffolk), and Elizabeth herself was a great benefactor of the Clare friary. It has been suggested that the foundation of the friary in Ballinrobe could have taken place as thanksgiving following the birth of their son and heir in 1312.

In 1338 the friary was the backdrop to an infamous event in Mayo history. Edmund de Burgh (d.1338), son of Richard the ‘Red Earl’ of Ulster, was taken prisoner and held at Ballinrobe friary by his cousin Edmund Albanach de Burgh, known as ‘the Scot’, before being taken to what is now known as the Earl’s Island in Lough Mask, a short distance away.   While negotiations for his release were in progress with the Archbishop of Tuam, he was placed in a weighed bag and drowned by some of the Burke Stauntons. Following the murder in 1333 of William de Burgh, 3rd earl of Ulster, this killing of Edmund de Burgh marked the end of the English rule in Connacht until the Tudor conquest of Ireland in the late sixteenth century.

Though modest, the remains of the friary are very picturesque, sitting within their own graveyard, the large east window of the church, a three-light with switch line tracery, facing the road. The restoration of the remains was completed in 1994 by the Lough Mask and Lough Carra Tourist Development Association, together with Fás, and the site was officially opened by President Mary Robinson.  Since 2009 a plaque stands in the graveyard which includes a copy of the Seal of the Priory. Beside the east window, the south wall of the church choir features a piscina and a tomb niche/sedilia, typical elements of a mendicant church.

Prior to 1337: The friary of Ballinrobe is mentioned in the register of the Dominican priory of Athenry, Co. Galway

1338: Edmund de Burgh, son of Richard ‘the Red Earl’ of Ulster, is captured in the friary by his cousin Edmund Albanach de Burgh, and later murdered by drowning in Lough Mask

1400: Pope Boniface IX grants an indulgence to those who would visit and assist the repair and conservation of the friary

1413: A few friars from the Ballinrobe friary are said to have gone to found a new community in Burriscarra, in an abandoned Carmelite friary granted to the order with the consent of Pope Gregory XII

1423: In the general archives of the order is a reference to a man called Richard O’Madden being made a permanent member of the Ballinrobe community in March that year

1421: Pope Eugene IV grants another indulgence to those who would assist with the ‘completion, decoration and fabric of the church’, as it ‘lacks a bell tower, and is very destitute of books, chalices and other ecclesiastical ornaments’

1574: The friary is still occupied by the friars, despite the general dissolution of monasteries several decades prior

1584: An inquisition found that the friars were in possession of around 30 acres, a 2 acre parcel called St John’s, a mill and a watercourse. St John’s was probably the site of the church of St John’s the Baptist, which belonged to the Knights Hospitallers

Post 1641: The friars were again in occupation of the friary after the 1641 rebellion

1642:  The friary at Ballinrobe was gifted a chalice by Malachy O’Queely (d.1645), Catholic archbishop of Tuam, with the inscription asking for prayers for the archbishop: