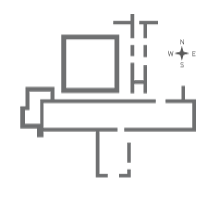 The Franciscan friary is located on the outskirts of the medieval town of Ardfert, Co. Kerry. The town was important from the early medieval period, and was centre of a diocesan see from the early twelfth century. Expansion of Ardfert Cathedral and the construction of the friars’ church was apparently concurrent during the latter part of the thirteenth century, as they share a number of architectural features, in particular their windows. The substantial tower built at the west end of the friary church in the fifteenth century is in an unusual position, and resembles a residential tower house. The friary was fortified as a barracks during the Desmond rebellion in the sixteenth century, and subsequently became a picturesque ‘eye-catcher’ in the landscaped grounds of the Crosbie family seat at Ardfert House.

Ardfert friary was the burial place of the Fitzmaurice lords of Kerry from the thirteenth to the sixteenth centuries. Little is known of its founder Thomas Fitzmaurice other than that he is said to have died in 1280 at the residence of his son-in-law Oto de Lacy in Bruree, Co. Limerick and was buried on the north side of the friary’s altar.

Tension between the friary and the cathedral erupted in 1310 when the friars were involved in a legal case against Nicholas, bishop of Ardfert for removing the corpse of a local Anglo-Norman noble John de Cantelupe from the friary by force and burying it somewhere else.  During the incident, a number of the friars were beaten.  As a result, the bishop and a number of his chaplains, Odo O’Hayn, Geroge de Canhan and John O’Dyny, were arrested and their goods seized.

The friars were evicted in 1584 and the friary was taken over as a barracks by Colonel John Zouche.  He was engaged in extensive conflict against Gerald Fitzgerald, 15th earl of Desmond, eventually defeating him and sending the earl’s head to Dublin.   After Zouche left the friary, it was occupied by the Protestant bishop of Ardfert, who may have been responsible for some alterations to the fabric.

The friary at Ardfert stands as a picturesque ruin in the old demesne lands of Ardfert house. Remains consist of the choir, nave, cloister and dormitory and a thirteenth-century window divided into five lights at the east gable which would have caused the choir to have been brightly lit in comparison with the rest of the church. Close by is the medieval ecclesiastical town with a monastic history that may stretch as far back as the sixth century when St Brendan ‘The Navigator’ founded a monastery there. The nucleus of this ecclesiastical settlement is the cathedral, the standing remains of which contain pre-Romanesque masonry, the Romanesque west doorway and later medieval features. Over eight hundred burials were discovered as a result of excavations in the cathedral including one buried with Roman intaglio mounted on a twelfth/thirteenth-century ring and with three oval glass mounts around the head. This may have been a grave of an early bishop of Ardfert. Close to the Cathedral is a small Romanesque church and a fifteenth-century church incorporating a carving of a wyvern (a dragon with eagle’s legs).

1253: Probably founded by Thomas Fitzmaurice, 1st lord of Kerry and Lixnaw who was buried in the friary

1310: Conflict between the bishop of Ardfert and the friars over burial rights during which the friars suffered violent beatings

1584: The friars were driven out the friary and it was taken over as a barracks by Colonel John Zouche. Zouche also denied the funeral courtege of Thomas Fitzmaurice, 16th baron Lixnaw to the friary, resulting in his burial in the nearby Cathedral

1670: The fifteenth-century transept window of the friary church was removed and placed in the transept of the cathedral when it was converted for use as the Protestant parish church of Ardfert. It remained here till 1815 when it was restored to the friary as part of the settlement of the estate of John Crosbie, last Earl of Glandore