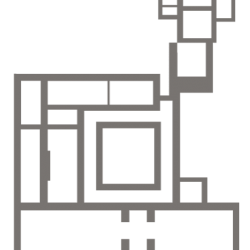 The Augustinian friary is situated to the east of Adare, on the banks of the river Maigue opposite the castle. The friary, also known as Black Abbey, was founded by John Fitzthomas Fitzgerald (c.1256-1316). This church became the Church of Ireland parish church and schoolhouse (now a private residence) and although restored in the nineteenth century, a fifteenth-century tower and charming small cloister are among the medieval features to survive.

John Fitzthomas Fitzgerald was one of the foremost magnates in Ireland due to astute political marriage alliances and his belligerent quest for land throughout the country. He fought for the crown during the Bruce Invasion and was created 1st earl of Kildare in May 1316 but died shortly afterwards. He was buried at the Franciscan friary at Kildare. The confirmation charter for the Adare foundation, granted by the lord deputy of Ireland, Roger Mortimer, was addressed to John’s son Thomas. It is dated 13 December 1317. This grant included lands and tenements in the town of Adare. The Observant reform was introduced by Friar Myler Cantwell in 1472. The friary was officially suppressed in 1539-40 although friars were still in residence in 1559.

In the fifteenth century, the friary is likely to have been under the patronage of the powerful Thomas Fitzgerald, 7th earl of Kildare (d. 1478) and his wife Joanna, daughter of the earl of Desmond who were major patrons of the Franciscan friary in Adare. Their association with the Augustinian friary is suggested by the Kildare and Desmond arms that are placed above the late fifteenth-century gatehouse.

The picturesque village of Adare retains a number of evocative medieval structures including the Desmond castle and the houses of three medieval monastic orders. Despite considerable restorations, the Augustinian friary still retains much of its original character, and is unusual in that the church is still in use as a place of worship. Features of particular interest include the intimate, partly restored, cloister, festooned with the heraldry of the friary’s patrons.  Inside the church the south aisle, or Lady Chapel, accommodates a number of fine tomb niches. The base of the large east window of this chapel was cut away at some point to accommodate an altarpiece – now lost.

1316: The friary was founded by John Fitzthomas Fitzgerald, 1st earl of Kildare before his death in the same year. The grant was confirmed to his son Thomas in 1317

1472: In May, Myler Cantwell and two other friars were granted permission to introduce the Observant reform at Adare

1559:  It is likely that the friars were still in residence in 1559.  They may have been driven out of Adare at the same time as the Franciscans around 1581

1807: The church was restored for the use of the Church of Ireland parishioners of Adare

1814: The old refectory was roofed and converted into a schoolhouse (now a private residence)

1826-27:  The Dunraven mausoleum, designed by James Pain, was inserted into the western end of the cloister

1854: The English architect Philip Charles Hardwick, undertook a series of works largely paid for by Caroline, Countess of Dunraven