The EU ‘3D-Icons’ project aims to create highly accurate 3D models and a range of other materials (images, texts and videos) of iconic and internationally important monuments and buildings across Europe and to provide access to this data on line.

Over 130 monuments and buildings from Ireland, including decorated high crosses, the island monastery of Skellig Michael, the passage tombs of Knowth and Newgrange, and the ceremonial landscape of Tara are featured in this digital collection, as is the monastic complex of Glendalough

St. Kevin’s Church
by The Discovery Programme
on Sketchfab

St Kevin’s Church is the only stone-roofed building to survive at Glendalough and it incorporates a croft between the barrel-vaulted ceiling and the roof. It was probably built in the eleventh or twelfth century and was originally a small rectangular single-celled church with a miniature round tower belfry. A later chancel and sacristy were added to the east. The roof of the oratory is steeply pitched and corbelled while the outside of the roof stones are roughly dressed to the slope. The only access to the belfry was through the croft which in turn was accessed through a small square hole in the vault. The belfry was at one stage likened to a chimney and so the church became known as St Kevin’s Kitchen.The existence of a wooden floor is indicated by beam-holes on all the walls at the springing of the arch. This room was lit by a small square-headed window. The foundations of the chancel are visible but the stone-roofed sacristy at the NE angle of the church still stands.

Round Tower, Glendalough
by The Discovery Programme
on Sketchfab

The Round Tower is to the NW of the cathedral on slightly higher ground within the main graveyard with its round-headed granite doorway facing the cathedral. Built on two offsets, it had five floors above the entrance carried on beams set into beam-holes. There are four trabeate windows at various levels and a further four at the cardinal points, just below the reconstructed conical cap. A rectangular channel runs right through the thickness of the wall just below the doorway. Round towers are a typical feature of early medieval Irish monasteries and are likely to have been built mainly between the eleventh and thirteenth centuries AD. They symbolized a monastery’s power and were probably used as bell-towers.

For more information, images and models of the Round Tower, visit 3D Icons

Priests House
by The Discovery Programme
on Sketchfab

The Priests’ House is situated within the main graveyard to the SW of the cathedral. A small rectangular building possibly of twelfth-century date, it has been subjected to considerable reconstruction. There is a Romanesque arched recess in the exterior of the E wall and a door in the S wall features a fragmentary tympanum with three figures holding a bell, a staff and a book. The function of this building is uncertain. It may have been a reliquary church. It became known as the ‘Priest’s House’ as priests of the parish were buried there in the 18th century. For more information, images and models of the Priests’ House, visit 3D Icons

Cathedral, Glendalough
by The Discovery Programme
on Sketchfab

The cathedral is the largest and most imposing structure at Glendalough and is situated in the SE division of the main enclosure on a small plateau overlooking the junction of the Glendasan and Glenealo rivers. It was reputedly dedicated to SS Peter and Paul  and ceased to function as a cathedral when the diocese of Glendalough was united with Dublin in 1214. It consists of a multi-period nave and chancel church with a sacristy. The earliest phase is evident in the cyclopean masonry in the nave walls while later rebuilding probably took place around AD1100. The decorated chancel arch, sacristy and north doorway were added towards the end of the twelfth century. The nave has antae (projecting stones) at both E and W. The W door has inclined jambs, simple flat architraves and a round relieving arch above the lintel. There are five cross-slabs placed against the inner N wall of the chancel, one of which may commemorate Muirchertach Ua Cathaláin, king of Clann Fogartaig, slain at the battle of Móin Mór in AD1151.

For more information, images and models of the cathedral, visit 3D Icons

Glendalough Gateway
by The Discovery Programme
on Sketchfab

The remains of a two-storied gateway are the only such building to survive in Ireland. It consists of a square building with two round granite arches and antae in the north and south walls. Some of the paving of the causeway through the gatehouse is still intact. A second floor is indicated by the presence of corbels in the interior. A possible section of the enclosure wall adjoins the NE corner. A slab on the W wall is incised with a Latin cross probably marking the entrance to the innermost part of the monastic city.

For more information, images and models of the gateway, or any other site at Glendlaough, visit 3D Icons 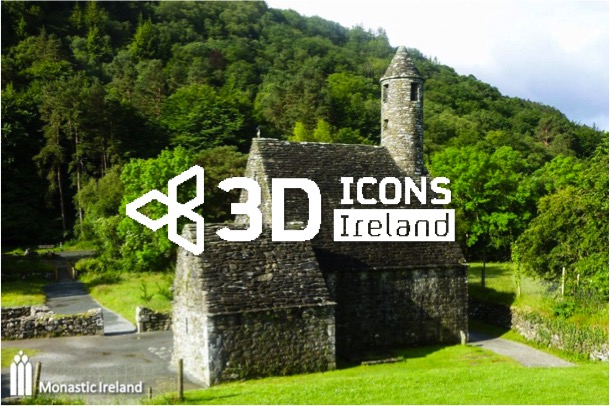