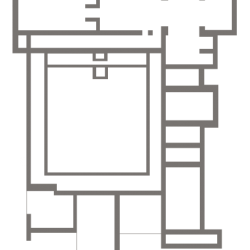 Jerpoint Abbey may have been in existence since the 1160s but was only formally affiliated to the Cistercian order in 1180. It was located close to Newtown Jerpoint, a substantial settlement with a parish church and a stone bridge over the River Nore. This bridge gave Jerpoint its name, ‘ori pons’ meaning the Nore bridge. A charter issued by John, lord of Ireland c. 1192 confirmed an earlier charter granted by one of the kings of Osraige (Ossory) from the Mac Gilla Pátraic (modern Fitzpatrick) family, either Domnall I (d. 1176) or Domnall II (d. 1185). It belongs to a small group of Irish Cistercian churches that combine influences from both Burgundian and West Country English sources. Its architectural and some sculptural detailing is particularly close to that of its mother house at Baltinglass, Co. Wicklow founded in 1148. It was the mother house of Killenny, Co. Kilkenny (fd. c. 1185, now destroyed) and Kilcooly, Co. Tipperary (c. 1184).

Scholars believe that Domnall (d.1176), the son of Cerball Mac Gilla Pátraic was possibly the founder of Jerpoint Abbey. This is supported by a charter of John, lord of Ireland and count of Mortain, c.1192 to Jerpoint Abbey confirming the lands previously granted by Domnall, king of Osraige. In addition, it is stated that the grant happened before Richard de Clare (‘Richard FitzGilbert’, ‘Strongbow’) (a. 1127–76) earl of Pembroke and Strigoil, arrived in Leinster in 1170.  Architectural evidence also supports this date.

Jerpoint Abbey is one of the most complete Irish Cistercian monasteries.  The church, dating mainly from c. 1160-1200 is still relatively intact and its fifteenth-century crossing tower dominates the surrounding landscape.  Preserved within the church is an important collection of sculpted tombs, including carvings of saint and apostles associated with the sixteenth-century O’Tunney ‘School’ of sculptors.  The reconstructed fourteenth- or fifteenth-century sculptured cloister arcade is unique in the context of Cistercian cloister arcades for its rich array of quirky sculptures.  The abbey is located close to the river Nore, 2.5km from the medieval town of Thomastown.

c.1160-70: Jerpoint Abbey was probably founded under the patronage of the kings of Osraige (Ossory)

1180: Jerpoint formally affiliated to the Cistercian order and became a daughter-house of Baltinglass, Co. Wicklow (1148)

c.1192: John, lord of Ireland and count of Mortain confirmed to Jerpoint Abbey the previous grant of Domnall, king of Ossory

1217: The abbot of Jerpoint was deposed for causing the ‘riot of Jerpoint’ during an official visitation to the abbey.   The abbot of Bective abbey was involved in the riot – he was further charged with imprisoning a man in a tree stump until he died

1227: Stephen of Lexington, an English Cistercian monk appointed Visitor to the Irish monasteries ruled that, due to lax practices, Jerpoint be taken from Baltinglass and made a daughter of Fountains Abbey, England

1228: Killenny was united with the Cistercian house at Graiguenamanagh, Co. Kilkenny causing a dispute that lasted over 60 years.  In that same year, Stephen of Lexington ordered Brendan, the abbot of Jerpoint to go to Fountains Abbey for two years. A nunnery adjacent to the monastery was removed

1268:  A bond from this year details an agreement on behalf of the abbot of Jerpoint, John de Rupe, concerning trespassing in the abbey’s wood – Crdhcyndrum Rahyn.  The bailiff of Kilkenny, abbot of Jerpoint and the abbey itself were to receive a cask of wine in the event of any injustice or injury done to them

1374:  The monastery was under such financial due to continual wars between the Irish and English that they were no longer able to maintain hospitality and other due charges – the provision of guesthouses and care of people seeking refuge was a fundamental obligation of the Cistercian order

1441: The abbey was granted an indulgence to help pay for repairs to the cloister, dormitory and bell tower

1450/1:  The abbot of Jerpoint, David Mortymer, intervened in a marital dispute, passing a sentence of divorce between Ellan Walshe and William Connelle.

1540: Jerpoint abbey was dissolved and the property was granted to James Butler, earl of Ormond. The abbot, Oliver Grace surrendered on 18 March of that year and was granted a pension

1542:  James Butler (d.1546), 9th earl of Ormond was granted four monastic foundations – the Cistercian abbeys of Jerpoint and Duiske (Graignamanagh), the Augustinian priory of Kells and the Augustinian friary of Callan