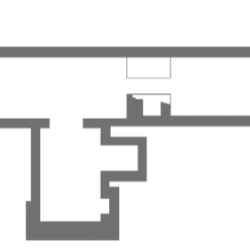 The Franciscan friary of Buttevant is located in the small market town of the same name on the banks of the River Awbeg, Co. Cork. It was founded by the de Barry family in 1251, most likely David I (d.1261), lord of Buttevant. It is also possible, but unlikely, that it was founded during the reign of Edward I (1272-1307) by David I’s son, David de Barry II (d. 1278). The latter was buried in the choir of the church in 1279, around the time a slender tower was inserted between the nave and chancel. The church and its south transept survive, as well as a crypt underneath the choir. The friary became the burial place of de Barrys, and Buttevant remained the principal residence of the senior branch of the family throughout the Middle Ages.

David de Barry I (d.1261) was an Anglo-Norman magnate whose family originated from Wales.  The de Barrys became dominant lords in East Cork following the involvement of David I’s grandfather, Philip (d. c. 1200), in the Anglo-Norman conquest of the region.  Philip was granted the cantreds (forerunners of medieval ‘baronies’) of Olethan, Muscridonegan – where Buttevant was founded – and Killeedy.  David I subsequently obtained half of the cantred of Obathan and the borough of Timoleague through his marriage to Annabel le Botiller.  David I died in 1261 at the battle of Callan, Co. Kilkenny.

The de Barrys’ control over their land manifested itself through the foundation of a number of boroughs and religious houses.  The Augustinian priory of Ballybeg, a mile to the south of Buttevant, was founded either by David I or his father William c. 1229, while David I extended the priory in 1235.  Other members of the de Barry family were associated with the Franciscan and Dominican foundations in Cork city, the Franciscan friary of Timoleague (c. 1312), and the Carmelite friary of Castlelyons (1307-9).

David de Barry I was responsible for the development of Buttevant as a borough for which Henry III (d. 1271) granted him rights to hold a market and fair in 1234.   The friary had a central position in the medieval borough, which appears to have been regularly laid out around the friary site, possibly following its foundation.

The remains of the friary in Buttevant feature among the earliest surviving example of Franciscan architecture in Ireland.  The church, including the south transept, dates back to the second half of the thirteenth century.  One of the most fascinating features of the friary is a crypt located under the choir, a unique feature in a mendicant friary.

Other notable features include three tomb niches of similar design, two in the nave, and one in the transept that was removed from its original setting in the east wall to be placed under the projecting chapel’s east window.  All three present a cinquefoil moulded arch and jambs with sculpted capitals and bases.

The tower between nave and choir has fallen but the lower section of the southeast pier survives, along with an elaborate altar-tomb on its eastern face, and a piscina (liturgical basin) recess placed in the south wall beside it.  A twin-arched piscina also survives in the choir, another relatively unusual feature for a mendicant friary.  Also of note is the nineteenth-century restored section of the north wall of the church, which integrates a number of fragments from the now-lost friary cloister arcade. 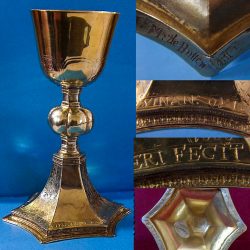 1251:  A friary is founded for the Franciscans in Buttevant by David de Barry I

1325:  The friary is said to have included both Irish and Anglo-Irish friars

1604:  The buildings were repaired

c.1617:  Two friars resided in Buttevant but were not allowed to use the friary buildings

1630: The number of friars had increased and they were sometimes able to live in the friary