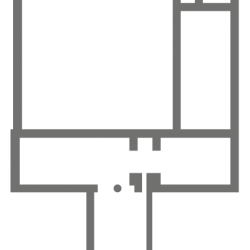 St Mary’s priory in Burrishoole lies in the very picturesque landscape of Mayo, on the northern shores of Clew Bay, a few kilometres west of Newport. The foundation of the priory received papal approval in 1486, but it is likely to have been founded a few years earlier in 1469 by Richard de Burgo of Turlough, Lord Mac William Oughter (d. 1473). It is possible that the date of foundation might be even earlier, when in 1456, Rory O’Marahen (Ymoraycen) – on behalf of Richard Burke – sought approval from Pope Callixtus III (d.1458) for a Dominican house in the area.  The remains consists of the entire church, including a crossing tower and a south chapel, the north wall of the north range and the western wall of the east range and which is also that of the cloister; it was an integrated cloister, where the upper floor of the east range covered both the ground floor of the range and the cloister walk. The grounds of the friary are still actively used as a cemetery for the local population.

Richard de Burgo of Turlough, known as Risteard an Cuarscidh (meaning ‘Richard of the Curved Shield’) was Lord Mac William Oughter and chief of the Burkes of Turlough.  After giving the Dominican friars land for the construction of the friary in 1469, Richard resigned his Lordship, taking the habit of the order and dying there in 1473. This act of benefaction of a place of retirement and final rest was a common practice in medieval Ireland.  The Archbishop of Tuam, Donatus Ó Muireadhaigh or Donal O Muiri (d.1485), had given permission for the foundation of the Dominican priory, but had not sought papal approval.  Pope Innocent VIII (d.1492) declared that the foundation was ‘irregular’ in 1486. Fortunately, he issued a Papal Bull which authorised the construction of the friary, including dormitories, cloisters, cemetery, refectory and a church, steeple and bell.  The Bull also absolved the friars and those involved in the unauthorised foundation from excommunication, which they had unwittingly incurred by acting without papal approval.

In 1567 Richard na Iarainn (meaning ‘Iron’) Burke (d.1583) married the famous pirate queen of Connacht, Gráinne Mhaol or Grace O’Malley (d.1603).  Honoria de Burgo, daughter of Richard na Iarainn founded a house of Dominican tertiaries close to Burrishoole priory in 1563, where she lived from a very young age with her fellow sisters. During the Desmond war, Sir Nicholas Malby campaigned in the region.  In 1580, during Malby’s military incursion, Honoria was forced to hide in the friary church for a week without food or water.  In 1653, the priory was attacked and she fled to an island in the bay with another sister. English soldiers followed them there, stripped them off their clothes and flung them into a boat with such violence that Honoria sustained three broken ribs. She was carried by her maid to the friary and placed in front of the altar of the Blessed Virgin. The maid went to look for the other sister, Honoria Megean, and found her dead. Upon returning to the church she found that Honoria de Burgo had also died, but was in a kneeling posture in front the altar, her head perfectly erect. 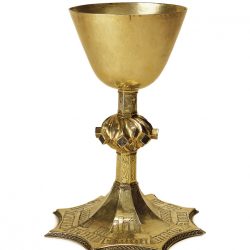 The de Burgo-O’Malley Chalice (1494) was made for the Dominican community of Burrishoole by Thomas de Burgo, the grandson of Richard, the priory’s founder, and Grania O’Malley, the great grand-aunt of the famous pirate queen, Grace O’Malley. It is one of the earliest surviving pieces of late medieval altar plate and is on display on the 1st floor of National Museum of Ireland – Decorative Arts and History in Collins Barracks.

Burrishoole Dominican priory lies in the picturesque landscape of Clew Bay, once home to the famous pirate queen, Grace O’Malley.  Overlooked by Croagh Patrick to the south and Nephin to the north, one of the twelve chief mountains of Ireland, the area is one of great natural beauty and historical interest.  Lying on the banks of the Burrishoole Channel, which links Lough Feeagh to Clew Bay, the ruins of the priory church are particularly interesting in the context of late Dominican foundations in Ireland, especially given its rural environment. The church is small, but includes an impressive crossing tower and rather large south chapel, almost as spacious as the nave. The church has some well-preserved fifteenth-century windows, including the east four-light traceried window, which has a carving of a figure at the apex of its pointed arch, on its external side.

1469: Richard de Burgo of Turlough, Lord Mac William Oughter, gives land to the Dominicans to found and build a priory

1473: Richard died in the priory, having taken the habit of the order and joined the community

1486: Pope Innocent VIII recognises the foundation, and absolves the friars from excommunication for not seeking papal authorisation

1494:  Thomas de Burgo and Grania O’Malley presented the Dominican friars at Burrishoole with a silver gilt chalice.  It is one of the oldest pieces of altar plate from later medieval Ireland

1496: John Lynch fitz John remembered a number of mendicant houses in his will, including Athenry, which received a chasuble and stole, and Sligo, Rathfran, Strade, Roscommon and Burrishoole, each of which received 20 d., paid in merchandise

1580: Burrishoole is caught in the violence of the Desmond wars in Munster

1606:  The priory, formerly granted to Nicholas Weston and assigned to Theobald Viscount Costillogalen, was granted to John King of Dublin

1653: The priory is attacked and occupied

c.1700: Fr Richard O’Heyne is the only member of the community alive at this time

1731: The priory community of twenty friars is said to live abroad or dispersed in the countryside around Burrishoole